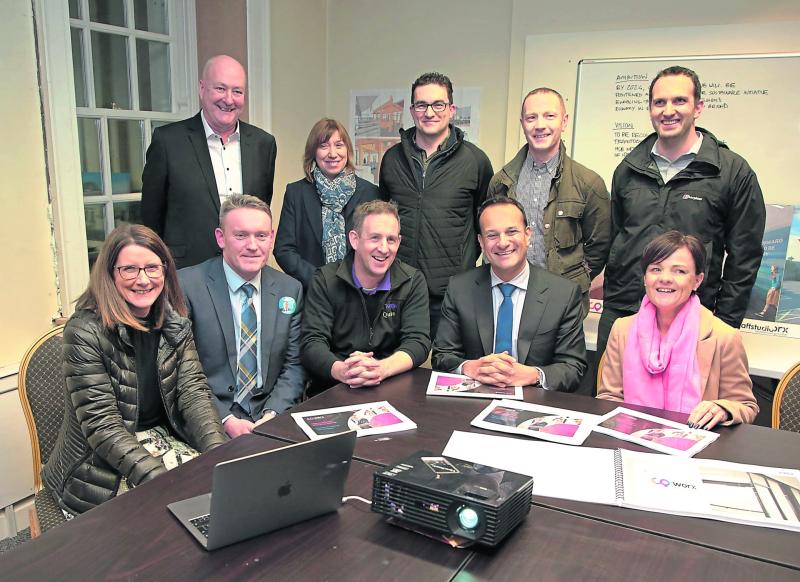 They may have stumbled out of the electoral traps but Taoiseach Leo Varadkar left Longford voters in no doubt last week as to Fine Gael's focus when it comes to reclaiming the seat it lost four years ago.

The Dublin West TD undertook a brief visit to the county town and Edgeworthstown last Thursday evening as campaigning ahead of polling day on February 8 kicked off in earnest.

Flanked by two of his party's chief protagonists hoping to ensure Fine Gael retains its position at the government top table were Cllr Micheal Carrigy and Senator Gabrielle McFadden.

Mr Varadkar, who tonight (Wednesday) goes head to head with Fianna Fáil adversary Micheal Martin, did his level best to talk up the merits of having a Fine Gael TD based in the county.

“I want somebody who is going to be able to knock on my door, come into my office and be able to say to me ‘look, there is a problem here in Longford’ whether it is a school or a road whatever is,” he said.

Not even the mere mention of his outgoing government colleague and claims of the infrastructural fruits OPW Minister Kevin 'Boxer' Moran has brought to the county since 2016 could offset the mind of the Fine Gael supremo.

What he did, however, intimate was his own take on just how well the Athlone based TD will fare in a little over two weeks time.

“I think Boxer will forgive me for saying that I think he is going to be pretty comfortably re-elected anyway,” he said.

“Boxer Moran has done a very good job as a minister, but it's not the same as having someone who is a county man, rooted in the community and area the way Micheál is,” he said, in reference to the Ballinalee postmaster.

An Taoiseach also visited the Edgeworthstown Enterprise Hub (CoWorx) development at the former Ulster Bank premises in the town.

Mr Varadkar's visit to the county came on the eve of an opinion poll which showed Fine Gael some 12 percentage points behind its nearest and fiercest of rivals Fianna Fáil.

A more recent survey released on Monday night and conducted by the Irish Times/Ipsos MRBI revealed a more narrow playing field for both parties with Fianna Fáil just two points (25 per cent) ahead of Fine Gael (23 per cent).

And, as with most election husting visits by the two predominant heavy hitters, there was no shortage of potential controversies from rearing their head either.

The first inkling of any unrest came as Mr Varadkar made his exit from local lifestyle store Fabiani.

In making his way to his State car, the Taoiseach came under fire from a protestor who aired their unease at the ongoing homelessness crisis.

In the midst of that commotion, a prisoner who happened to be clap eyes on Mr Varadkar from inside a prison van could be heard shouting: “You've ruined the country.”

Not that Mr Varadkar was in any way fixated on engaging with either dissentor ahead of what is likely to be a pivotal couple of weeks for both him and his party.