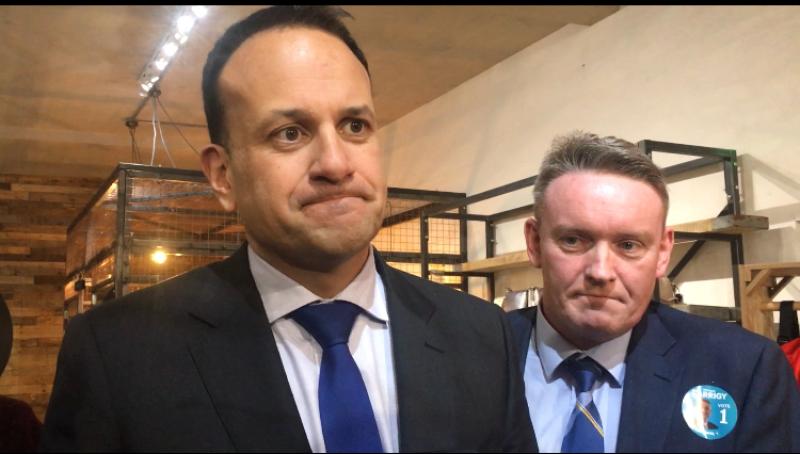 An Taoiseach reaffirms commitment to Longford during visit.

The race for a seat in the Longford/Westmeath constituency is quickly gathering pace, as was evident with the visit of An Taoiseach Leo Varadkar to the county earlier today, Thursday January 16, in support of party member and Longford general election candidate Cllr Micheál Carrigy.

Longford was identified as an area of extreme importance in the upcoming elections, with preliminary forecasts suggesting whichever party comes out on top in the constituency could possibly gain control of the government.

Mr Varadkar, alongside Cllr Micheál Carrigy, took in a trip to Longford town, where a meet and greet was held at Fabiani. It was here Mr Varadkar stressed the importance of Fine Gael gaining a seat in Longford, before offering his full support to Cllr Micheál Carrigy in the election race.

“I want somebody who is going to be able to knock on my door, come into my office and be able to say to me ‘look, there is a problem here in Longford’ whether it is a school or a road whatever is.”

Continuing he said: “I think that has been missing in recent years, that’s why I would really encourage people living in Longford to give Micheál Carrigy their number one. And, If for some reason they are not able to vote Fine Gael, give him number two.”

When it was put to Mr Varadkar that some good work had been done in the county without a local TD, An Taoiseach was in agreement but says it is not the same as having someone who knows the ins and outs of a community.

He stated: “Kevin ‘Boxer’ Moran has done a very good job as a Minister, but it is not the same as having someone who is a county man, rooted in the community and area the way Micheál is.

“I think he has a very bright future in politics if he is able to win this election.”

When asked what Longford could expect should Fine Gael regain power, Mr Varadkar says road infrastructure, the implementation of the national broadband plan, healthcare and tackling the housing crisis will remain the focus of his government.

“I am very committed to this county.” said Mr Varadkar.

“I am the Taoiseach who signed the national broadband contract. There are 20,000 premises in Longford who will benefit from that.

“We hear other parties saying they will tear up that contract, which effectively means telling rural Ireland to wait again. I think rural Ireland has waited too long. If I am Taoiseach again, they are the kind of things that I can prioritise, alongside issues like housing and healthcare.

“I think Longford will get heard a bit more and have a louder voice at the table if they have their own TD. I would like Micheál to be that TD,” he concluded.