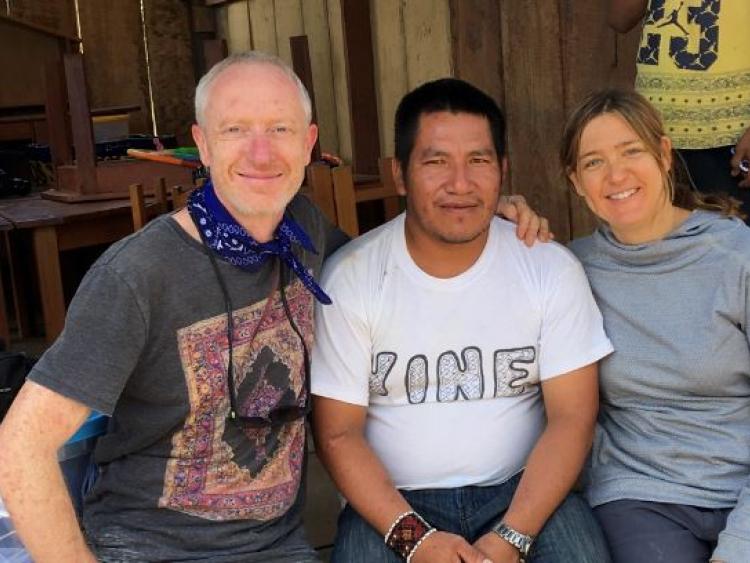 Not everyone gets to work at something they’re passionate about but, for Ciarán O’Hara, work and passion have aligned beautifully to afford him a fulfilling and rewarding career.

A Longford town native, Ciarán went to school in St Mel’s College before studying Computer Programming and IT in Letterkenny.

In the 1990s, he got his green card and moved to California, where he now works in the tech industry in the Silicon Valley/San Francisco Bay area as an IT Project Manager.

And, while IT is the job, conservation is the main passion and Ciarán has married the two together seamlessly.

“I’ve always had an interest in conservation. I was travelling in Peru in 2016 when I got invited to be a Technical Liaison for a Non-Government Organisation (NGO) called ARCAmazon,” he told the Longford Leader.

“That stands for the Alliance for Research and Conservation in the Amazon. And we have 11,000 acres of primary growth rainforest and we’re essentially, in a conservationist way, occupying that land for the next 40 years to protect it from illegal logging, deforestation and illegal gold mining that’s happening in the Amazon.”

Ciarán’s credentials were perfect for the Technical Liaison role. With contacts in technology companies in the Silicon Valley/San Francisco Bay area and a friend who is a Project Leader at NASA, Ciarán has been able to use his connections to try and make a difference.

Stemming from that, he was one of the main organisers of a documentary expedition in 2018 in the Las Piedras river. In English, that translates to ‘the stones’. Las Piedras river is a beautiful tributary of the Amazon River system in South Eastern Peru.

“We organised a boat to go to two of the most remote communities in the upper Las Piedras. There are two communities - one at Puerto Nuevo, which means New Port, and one at Monte Salvado, which means saved land,” he explained.

“Militia men wearing disguises attacked their tribe, because there’s all sorts of threats like narco trafficking and illegal deforestation happening. So this went viral on YouTube. There are eight million views on YouTube and a documentary about it on Netflix.”

Ciarán was part of the first expedition team who went to the area to listen to and capture the stories about the challenges facing indigenous people in these areas - stories which are currently being edited and made into a short film.

“Indigenous land rights and conservation are strongly connected, even though researchers do not always make the connection between the two,” he said, adding that the documentary team is hoping to make this clear with the short movie they are producing.

“One of the communities we stopped at was at Puerto Nuevo - a community made of people who actually moved out of Monte Salvado because there are rumours the community to the North there may be under pressure to be involved in illegal logging or other activities related to their location at the frontier of civilization.

“In Puerto Nuevo - after initial wariness from the community - we were warmly welcomed as partners who came to listen to the voices of the community leaders, such as the village chief, teachers, elders and the young people of the village” Ciarán remarked.

“They don’t have healthcare, they don’t have water. They’re basically living on this land and they have little rights or recognition from the Peruvian government.

“We’re listening to those people, particularly, in both communities. And we’re bringing their stories to the wider world using the documentary as a tool to try and get funding from some of the tech companies in the States, Ireland or any other NGOs who want to help fund conservation efforts throughout Las Piedras.”

Eventually, Ciaran would like to help out with plans to form an alliance of NGOs in the Las Piedras area to create a protected ‘wildlife corridor’ running north to south in this area so animals and humans can move throughout the forest habitats, to hunt, gather and escape pressures of environmental change.

This year, Ciarán and his team are hoping to pull the whole expedition together, resulting in a short film that he hopes will feature in film festivals, or even on the small screen some time soon.

That's not the only thing the Longford man has been up to, though. Ciarán is also big into climate change and was lucky enough this year to attend a conference that was chaired by the former US Vice-President Al Gore.

“Gore made the movie An Inconvenient Truth in 2009 and calls himself a recovering politician. He’s out of politics and his thing now is the environment,” Ciarán explained.

“Mr Gore was talking about the environment and climate change back in the 70s. And he chairs these huge big trainings for people to become climate reality leaders.

“He originally gave a talk about the environment and he made a movie called An Inconvenient Truth because it’s the truth but it’s inconvenient to fossil fuel companies and power companies. Then he made An Inconvenient Sequel: Truth to Power.

“So I was lucky to be accepted to go along to that and get trained to give climate reality talks about the truth of climate science. Because it’s science.

“So the idea is, we’re trained to go and give talks to councils and city bodies as this is the most effective way to effect change in the US and globally. Ireland is already on the ball. I think the United States is the big nut to crack.”

Ciarán is hoping to give a number of talks in the future on the issue, with plans to line up a number of presentations in Longford the next time he’s home.

On top of all that, Ciarán is currently working with SPECIES (Society for the Preservation of Endangered Carnivores and their International Ecological Study) that advocates for the protection of carnivores like jaguars, pumas, grizzly bears, etc.

“I’m working with a guy from NASA, and a Doctor of Conservation and someone from the UN. One of the big things in conservation is camera traps,” he explained.

“You have a passive camera to capture images of animals. Jaguars are really elusive, solitary creatures. And when the jaguar passes by, it sets off the infrared and it takes a video. So you can actually seek out animals in the wild to see how healthy they are.

“But most of these traps are sold to big game hunters - the bad guys - because they can afford to pay $400 on camera traps.

So, through the guy at NASA who knows all about how you can get cheap sensors and cheap lenses, we’re researching how to make cheap camera traps for use down in South America.”

It is nice to try and make a difference in the world, and Ciarán O’Hara and others like him are trying to use their opportunities and connections to have an impact on the world around them, and encourages others to get involved in conservation or environmental projects - either locally or further afield.

“Doing projects like NGO work is a passion. That gives me balance when I have to go and work in the office. It gives life greater meaning,” he said.

“Sometimes it’s hard to balance the two, but it definitely gives an awful lot of meaning and drive and trying to have an impact is important.

“I acknowledge that I am very lucky to have these opportunities to work on these projects and have some sort of impact and I am very thankful for that. To say you have an impact is something to be proud of. And if I have had an impact, I’m lucky. I’m lucky that I’m able to do what I’m doing.”

And, he added, volunteers (who pay a small fee) are always welcome to help out with various projects and expeditions in the rainforest in Peru.

More information can be found at www.conservetheamazon.org, or by emailing Ciarán on ciaran.ohara@gmail.com. You can also find out more about the Climate Reality Project at climaterealityproject.org, or SPECIES at carnivores.org.