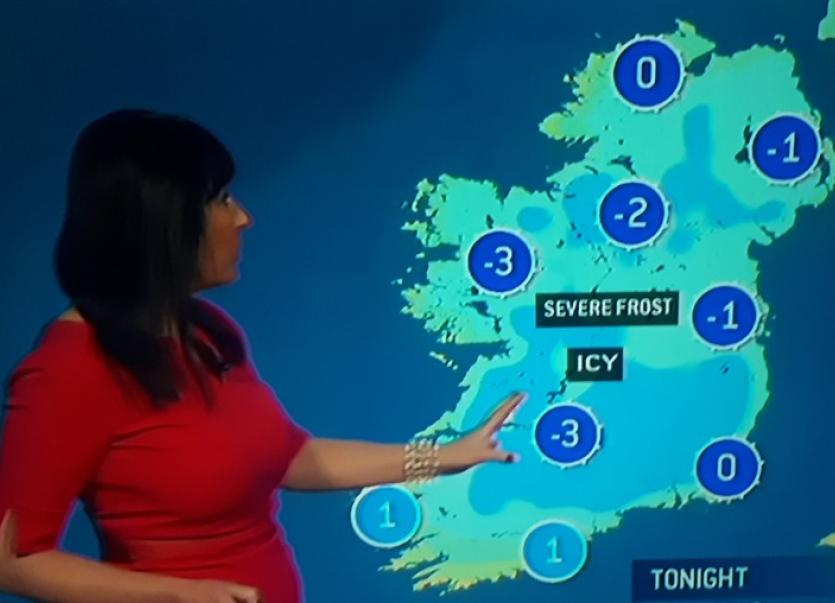 Met Éireann has warned of snow, sleet, hail, thunder and freezing temperatures in its latest weather forecast for Saturday night.

In her forecast after the RTÉ news on Saturday, meteorologist Jeane Byrne said the Status Yellow warning for snow and ice remains in place adding that Saturday marked the start of very cold next few days with widespread frost and icy conditions.

"We have the air coming from polar regions all the way from the northwest. It is very cold feeding in plenty of showers many of them turning wintry as the head further inland in particular," she said.

She said an organised band of rain will turn to rain, sleet and snow in some places especially cross the northern half of the country. She said there could some hail or thunder while temperatures would fall below freezing.

However, she said clear spells would develop overnight on Saturday with the showers becoming confined to mainly to western and northwestern coasts.

"That's the way it will start off in the morning (Sunday); lots of sunny spells across the country then another system is going to come in from the Atlantic. This one will bring more rain and sleet of gradually from the southwest and as it heads northeastwards and in turn to see some snow particularly in Connacht, north Leinster and parts of Ulster," she said.

She said Monday would be dry and bright with showers in the north.

Cold with wintry showers tonight and icy stretches on untreated surfaces. Along coasts it will be breezy at times but otherwise winds will be light. Lowest temperatures of -3 degrees. pic.twitter.com/x206KSIS05

A nationwide forecast and outlook covering the next week can be found here. https://t.co/9gKN6SVok4 pic.twitter.com/oxc4DovNXo

Saturday night
Cold tonight with further wintry showers and some snow on higher ground. The showers will become confined to the northwest as the night goes on and good clear spells will develop. Minimum temperatures of -3 to +1 degrees with icy stretches forming on roads and footpaths. Breezy on southwest coasts but otherwise winds will be mostly light.

TOMORROW - SUNDAY, DECEMBER 15
Dry, bright and frosty in most areas on Sunday morning. Showers will develop in the southwest later in the morning and these will gradually spread eastwards during the afternoon. Some of the showers will be wintry again. Highest temperatures will range from 3 degrees in the north to 7 in the south. Winds will stay light in most areas but it will become windy in the southwest with westerly gales possibly along the coast later.

Sunday night: Showers will continue on Sunday night, with a few wintry falls, mainly in Ulster. Long clear spells will also occur. Minimum temperatures of -3 to +1 degrees Celsius with a widespread frost and icy patches. Light or moderate southwest winds will be strong and gusty at times near some coasts.

Monday: A cold, crisp and frosty start to Monday with some icy patches. Many places will have a dry and bright day with sunny spells, with showers largely confined to western and northern coasts. Afternoon maximums will be around 4 or 5 degrees Celsius, but up to 6 or 7 degrees at the coasts. Wind will be mainly light to moderate southwest. Mainly dry and clear on Monday night apart from coastal showers in the west and northwest. Minimum temperatures of -3 to +1 degrees Celsius in a mainly light southwest or variable breeze will produce a widespread sharp ground frost with icy patches.

Tuesday: Tuesday is shaping up to be another mainly dry and bright day with crisp winter sunshine, after a cold and frosty start with icy patches. Afternoon highs will range 3 to 6 degrees, but up at 7 or 8 at the coasts in mainly light southwest or variable breezes. Tuesday night will start out cold and clear with temperatures dropping to between -3 to +1 degrees Celsius early on with frost forming. Cloud will, however, increase later in the night, and temperatures will recover towards morning. Winds will back to the southeast and freshen overnight.

Wednesday: Current indications suggest an increasingly wet and windy day with rain developing in parts of the southwest during the morning, and becoming widespread during the afternoon accompanied by fresh to strong and gusty southeasterly winds. There is a signal for heavier bursts in southern parts of the country. Afternoon temperatures look likely to range 4 to 8 degrees north to south, but temperatures will rise to between 8 and 11 degrees after dark. The rain will transition to clear spells and showers on Wednesday night. Lows of 3 to 7 degrees, with southeasterly winds gradually moderating.

Thursday and Friday: Temperatures trending milder than earlier in the week in a mostly southerly airflow with rain at times.