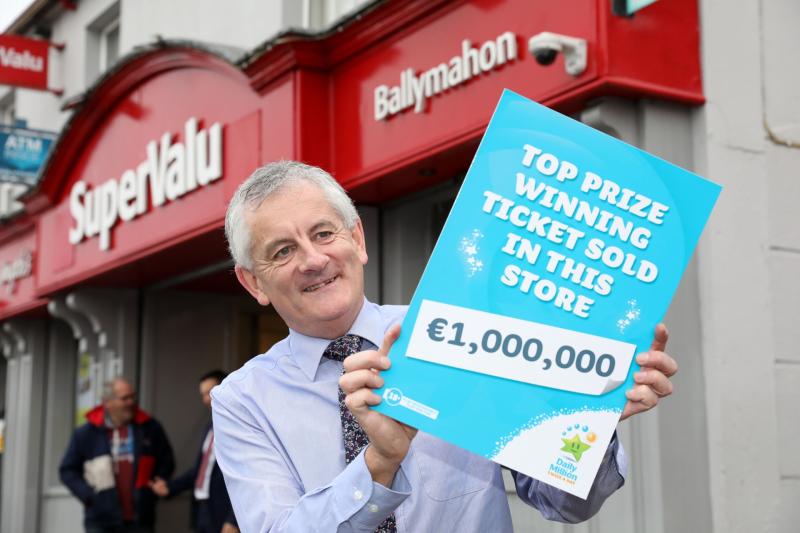 Pat Smyth, owner of the lucky SuperValu store in the in Ballymahon, Co Longford celebrates after he sells the winning €1 million ticket for the Daily Million draw on Wednesday, October 30

Longford has a new millionaire after one lucky player finally claimed a €1 million Daily Million top prize which they won last October.

The easy-going Longford native who wishes to keep their win private, purposely delayed claiming their prize to give themselves time to contemplate their ‘life-changing’ win.

“I knew about my €1 million win all along but I didn’t want to rush up to Dublin too quickly in case it created suspicion in the town,” laughed the lucky Longford millionaire.

“It is truly a life-changing win for me and my family so the sensible thing to do was to take some time out so we could come to terms with being millionaires before we collected our prize,” said the winner.

The winning Quick Pick ticket was sold at Smyth’s SuperValu on Main Street in Ballymahon which is situated in south Co Longford.

After giving themselves a number of weeks to gather themselves before the €1 million prize was collected, the winners focus now turns to enjoying a hassle-free Christmas with their family:

“Christmas will be all that much special this year knowing that we can thoroughly enjoy the festivities with the entire family without having to worry about stretching our pay cheque throughout January. The biggest thing for us though is that we will now be mortgage free for the rest of our lives which is such an amazing feeling,” added the winner.