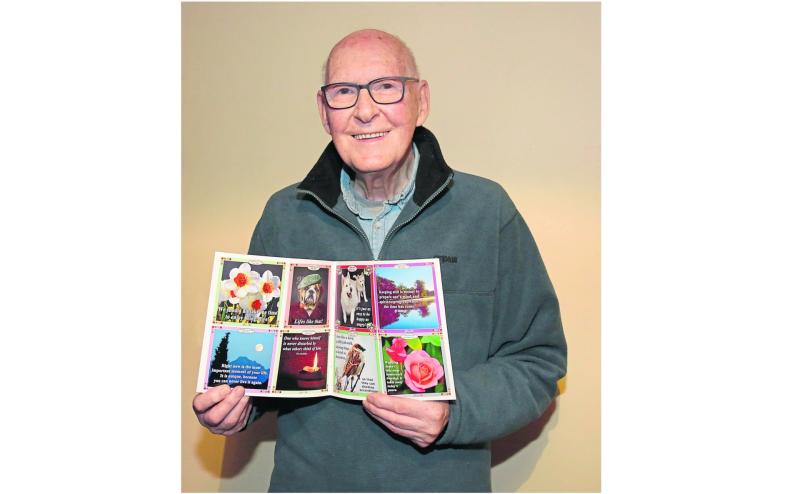 We all need a little guidance from time to time and Longford man, Joe McDonagh, has got it in spades.

He doesn’t claim to know it all, though. In fact, it was through his own crippling hardship that he learned to see the light in life and to focus on what’s really important.

And a wisdom like that is too valuable not to share, which is why the former Longford Leader photographer decided to put his thoughts into a book bursting with beautiful and colourful images.

He successfully launched his first book last year, sharing a number of images accompanied by spiritual phrases, designed to bring a little bit of light into the lives of anyone who might need a little bit of perspective.

Now he’s preparing to launch his second book of cameos which is similar to the first, but with even more words of wisdom and even more photographs.

Joe hasn’t had it easy in life and, when he had cancer he found his life changed completely, giving him a whole new outlook on what was important and what was meaningless in life.

Joe himself coped with the serious changes in his life by turning to spirituality and changing his attitude.

He learned a lot about acceptance on his journey through spirituality and came to realise the importance of acceptance.

“It’s deadly important that you accept the hand you’re dealt in life and you play it with acceptance,” Joe told the Longford Leader when he was preparing to launch his first book last year.

“People have a hand in life and they don’t accept it - they don’t want it. Cancer crucified me. My whole life was gone - family, everything, because I could go nowhere.It was the hand I was dealt.”

When Joe started creating his beautiful and inspirational cameos, he was sharing them on Facebook once a week. Two years ago, he decided to start doing one a day and, while it was a huge undertaking, it certainly paid off, with Facebook friends responding in a positive way to the images he shared.

On a visit to his old place of work, the Longford Leader newsroom, Joe showed his former colleagues the book and offered to share one cameo per week in the newspaper. He’s been providing them weekly ever since.

From there, he went to see Longford County Librarian, Mary Carleton Reynolds who immediately encouraged him to launch it to the public.

This year, Joe is looking forward to sharing his latest collection of cameos in ‘Right now. “I Am”. Not here. Not there. Book 2’.

The book is his latest collection of wise and philosophical sayings enriched within a photo-book of entirely new images.

His book launch will have an extra festive punch this year as Mary Holmes will deliver a beautiful Christmas floral demonstration after the official launch.

The book launch kicks off at 7.30pm on December 5 in Longford Library. All are welcome and encouraged to attend.