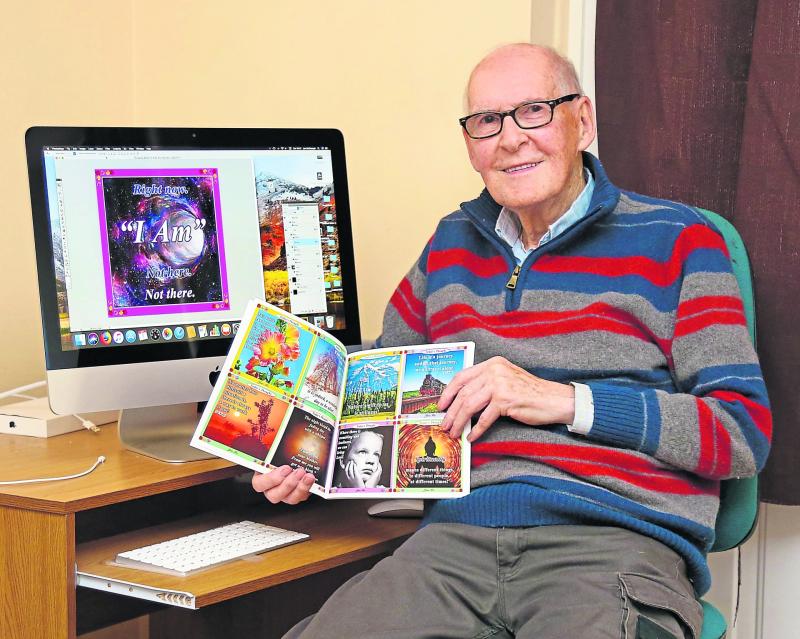 Joe McDonagh shows off some of the cameos that feature in his new book. Photo: Shelley Corcoran

Life often has a funny way of turning you upside down and shaking everything out of you until you feel there's nothing left and Longford man, Joe McDonagh has certainly had his fair share of hardship over the years.

But it's what you do with the hardship that really defines you as a person and it was through spirituality, acceptance and being in touch with his own thoughts that Joe Mc found the path to wisdom.

ALSO READ: Living in the now and learning life's lessons in Longford

The former Longford Leader photographer is about to launch a beautiful book of colourful images and spiritual phrases to appeal to anyone who might need a little guidance in their lives - or even those who just like to look at inspirational photographs and words of wisdom over a cup of tea.

“The idea came from when I had cancer, plus everything else that had happened to me in my life,” Joe told the Leader last week.

“The cancer took the two legs from under me and changed my life completely - wiped everything out overnight.

“The way I could cope with it is I had been looking at spirituality for decades, bit by bit - drip feeding it. And it built up.

“With all the lessons I learned since I had the cancer and everything else, people often say to me ‘Jaysus, I’d love to have an attitude like you’.”

And, he said, he's learned a lot about acceptance on his road to wisdom.

“It’s deadly important that you accept the hand you’re dealt in life and you play it with acceptance.
“People have a hand in life and they don’t accept it - they don’t want it. Cancer crucified me. My whole life was gone - family, everything, because I could go nowhere.It was the hand I was dealt.”

Joe is now so well-versed in spirituality that he wanted to share the most important lessons he learned with anyone who might find them useful.

“I just started off on Facebook a couple of years ago with one a week. Then last year it came to me to do one a day and I thought that was a huge undertaking but then I went with it,”he said.

“They’re all totally original. They’re completely my own words, except for one or two where I have a name at the bottom.”

Joe managed to build up such a large and colourful collection of his online cameos that he decided to create a book for himself, documenting all of the beautiful images he had already created.

The result was a beautiful hardback annual filled with wisdom and spirituality.

“I did the big book especially for me as a record.

“Then I did a record for my family and a few people, which is the current book and I thought no more about it,” he said, referring to the smaller, glossy book he will be launching on Friday night.

“I gave a few here and there. Then, all of a sudden one or two people said ‘oh, can I buy a few of those from you?’ And it just started from there.”

This week's image can be found on page 41.

“It kind of snowballed from there,” he mused.

“I went into Mary Carleton Reynolds to show it to her - I never had a notion about a book launch. But they all thought it was fantastic. They were gobsmacked.

“And then it progressed from there. And that’s the purpose of it with all the little bits of wisdom.”

Joe has been through as much in his life as you can be through. He's been “down on the ground in black places” and he's come through the other side.

“I’ve come through it all and I’ve learned. It’s all a learning curve for me. I regard it as a success story - not a sob story. That’s deadly important,” he said.

Joe will launch his book, which is called 'Right Now. “I Am”. Not here. Not there.' this Friday, November 9, at 7.30pm in Longford Library.

All are welcome to join the celebrations.