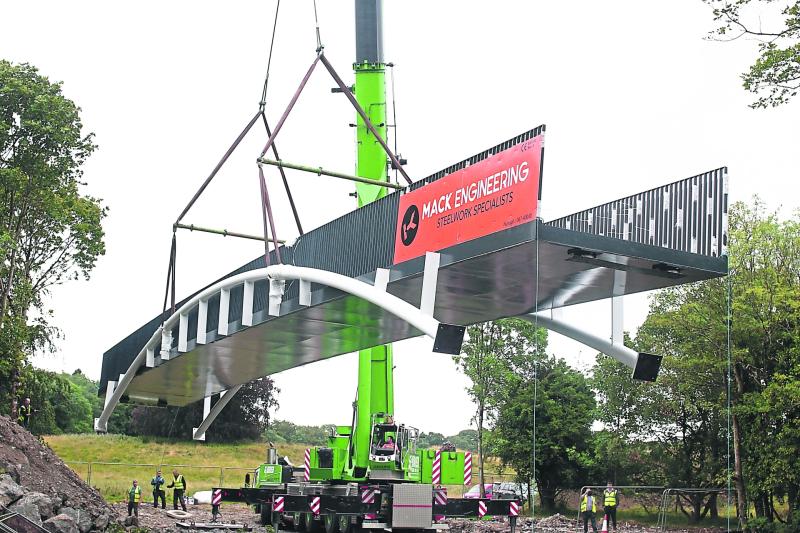 The White Bridge at Newcastle Woods, Ballymahon will be officially opened by Minister Kevin ‘Boxer’ Moran this Friday, November 22 and was funded under Project Ireland 2040 through the Outdoor Recreation Infrastructure Scheme and Longford County Council.

Newcastle Woods is a haven of tranquillity in south county Longford and is hugely popular with both locals and visitors.

The River Inny dissects the woods and was once crossed by The White Bridge, a white latticework iron footbridge which facilitated the transport of goods.

However, The White Bridge was dissembled in 1963 by the Board of Works to facilitate drainage works, with the promise to reinstate it. That reinstatement did not come until now.

The redevelopment of The White Bridge formed part of the commitment by Longford County Council to the local communities in the development of Center Parcs Longford Forest and to develop alternative trails throughout the woods to compensate for the loss of trails in Center Parcs.

The newly developed White Bridge is built in the location of the original bridge..

It is a 32 metre, single-span, galvanised steel footbridge with a concrete deck, 3 metres wide and 1.3m high and will further enhance Newcastle Woods.

It is another piece in the overall plan to develop the tourism and recreational infrastructure of Longford.

It will also promote off road connectivity via the new trail link, currently being constructed, from The Royal Canal Walkway for users from Dublin to Center Parcs and the wider south Longford area.