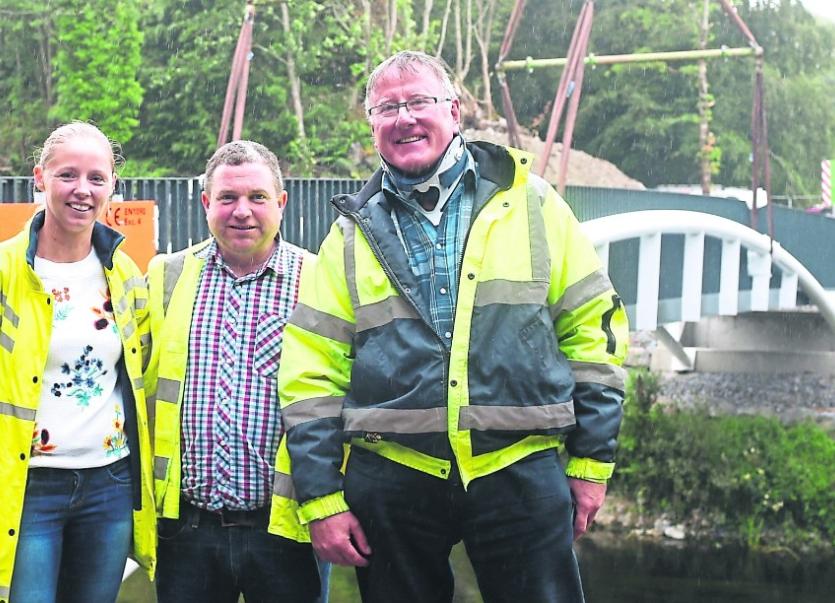 The new bridge will link the pathways on the north and south of the River Inny and will further enhance the beautiful amenity that is Newcastle Woods.

The beautiful, modern bridge is a replacement for an old bridge that crossed the river up until the 1960s when it had to be removed.

Its removal was only meant to be temporary but a reconstruction of the old bridge never came to pass and a replacement wasn't erected until last Thursday.

“From what I understand, the White Bridge was in situ up until about 1963 and then the Board of Works carried out a big drainage and cleaning operation in the Inny from Abbeyshrule as far as Ballymahon,” explained local councillor Pat O'Toole.

“There was a lot of rock in the river at the time and they had to blast it with some sort of explosives.

“I think that the blast was a bit too close to the bridge and it loosened the structure, making it unsafe, so it had to be taken down. It was only meant to be a temporary measure.”

It's been more than half a century since the old bridge was removed and, at last, it's being replaced, allowing users of the local forest to explore more of the pathways

“Some of the local people, when we were talking to Center Parcs, suggested putting back in a bridge as part of the overall development of the woods,” said Cllr O'Toole.

“Once Center Parcs got planning permission, Longford County Council started working on it.”

The 36 metre bridge will open up so many possibilities to the people of Ballymahon and Longford, allowing cyclists and walkers

to really make the most of the area, with routes around the forest and the Royal Canal cycle way nearby.

“The only piece that's missing is a cycleway along the river from Ballymahon to Newcastle Woods,” said Cllr O'Toole, adding that such a route is in the pipeline.

“That would very much enhance the area even further.”

White's Bridge was funded by Longford County Council and the Department of Arts, Heritage, Regional, Rural and Gaeltacht Affairs under the Outdoor Recreational Infrastructure Scheme 2017 and will be open for public use in the near future.

GALLERY | Ballymahon heats up to a subtropical 29.5C as Center Parcs Longford Forest resort is unveiled