ISPCA outraged over abandoned dogs in Roscommon and Longford

Appeal for information on cases of abandonment 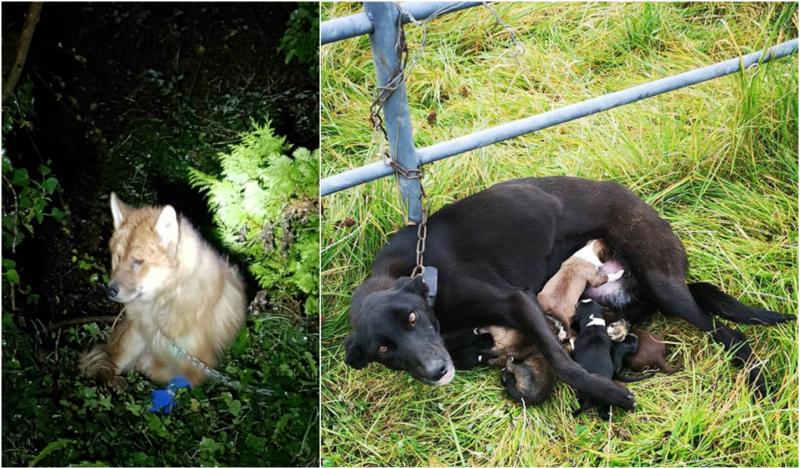 Left: The upsetting image of an Akita/German Shepherd dog which was found in critical condition tied to a gate Right: A lurcher and her six puppies, which were found chained to a gate in Roscommon

The ISPCA is appealing for information regarding two incidents of abandoned dogs in the past week.

Last week saw the story of a young lurcher and her six puppies go viral nationwide as the ISPCA put out a plea for information after the dog was discovered chained to a gate in Co Roscommon and trying to nurse her six newborn pups.

The dogs were found by a kindhearted passer by who immediately alerted gardaí and the ISPCA. Fortunately, they were not in bad condition when they were examined but the ISPCA is appealing to anyone who might know who anything about the dogs to get in touch.

A Facebook appeal for donations has raised over €7,000 for the charity.

On Monday, the ISPCA reported that a young German shepherd/Akita mixed breed dog with a severe injury was found chained to a gate beside the entrance to the ISPCA’s National Animal Centre in Kenagh.

Read also: ISPCA appeals for information about an injured dog discovered tied to a gate near Lanesboro

An ISPCA staff member rushed the dog to a local veterinary practitioner for emergency treatment where it was sedated and pain relief was administered. Its condition was confirmed as critical.

“We would ask anyone with any information on the origin of the dog, how it came to be injured or on who left it tied to a gate to make contact with us as a matter of urgency. Someone must recognise this unfortunate animal,” said ISPCA Chief Inspector Conor Dowling.

Anyone with information is asked to contact the ISPCA National Animal Cruelty Helpline in confidence on 1890 515 515.

Donations to help with the acommodation and care of abandoned animals are welcome via the ISPCA website at www.ispca.ie or @irish.spca on Facebook.

Read also: Dog discovered tied to a gate trying to nurse six newborn puppies is in the care of the ISPCA's Longford centre