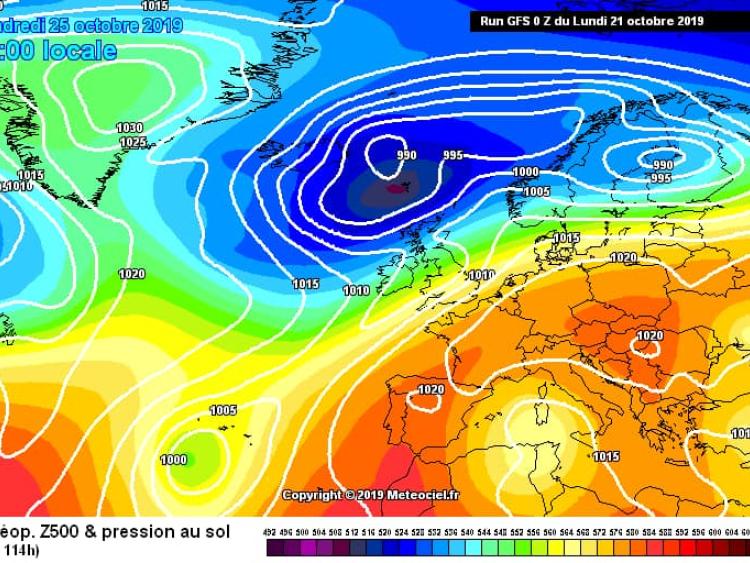 Much of the country woke up to freezing - or just above freezing - temperatures this morning as Ireland got its first proper taste of winter. And, while Met Éireann's website has a forecast for mild weather over the coming bank holiday weekend, Midland Weather Channel's Cathal Nolan has a different prediction. In fact, the midlands man is predicting snow for Ireland on Friday.

"This is not an April fools joke come early, but rather there is a pretty credible risk that some areas of the country may see their first snowfall of the 2019/2020 winter season as early as this coming Friday," he said in his latest Facebook post.

Read also: 'It's official,' National Ploughing Championships will return to Carlow next year

"A bitterly cold air mass for the time of year is expected to push southeastwards across the country from the northwest on Thursday, with upper air temperatures some 10-12 degrees below average. At the same time a very warm plume of air carried within a zonal jet stream will push northeastwards from the sub tropical Atlantic.

"As the very warm and moist air comes into contact with the bitterly cold Arctic air, it's expected to generate some intense precipitation leading to a flooding risk in the southeast of the country at present, whereas along the northern and northwestern edge of the rainfall it's expected to turn increasingly to snow."

The areas currently at risk of snow are all midland counties, he added, as well as much of Connacht, south and east Ulster and elevated areas of Munster.

"All upland areas are at risk of seeing some considerable accumulations of snow and some temporary travel disruption along elevated routes," he added.

"Snowfall in October is an exceedingly rare event in Ireland, however the last time snow was recorded in Ireland during October was 2009."

Met Éireann has predicted dry conditions tonight with mostly clear skies in the south and east, where it will be cold with lows temperatures of -1 to plus 2 C., with some grass frost. But more cloudy in the west and north and less cold too, with values of plus 2 to 5 C. Light southwest winds will increase moderate to fresh in west and northwest coastal counties.

Mostly dry on Tuesday. Early frost in the south and east soon clear, with some sunny spells for a time. But cloud will thicken from the west and it will become breezy there later as well. Top temperatures of 11 to 13 degrees. Moderate to fresh south to southwest winds will increase strong along Atlantic coastal later in the day.

Outbreaks of rain will move in across Connacht and Ulster on Tuesday night but it will stay mainly dry elsewhere. Minimum temperatures of 7 to 9 degrees in moderate to fresh southerly winds.

On Wednesday, rain in the west will gradually spread across the country. The rain will turn heavy at times in the west. It will become breezy as well with fresh and gusty southerly winds. Early Wednesday night the rain will clear with just a few showers following. Minimum temperatures of 4 to 7 degrees in light westerly breezes.

It looks like it will be mostly dry on Thursday with some sunny spells. Highest temperatures will be between 9 and 12 degrees in light breezes.

On Friday, it seems likely that rain moves up from the south, possibly turning heavy. In this scenario it will become milder as well from the south as the day goes on. Strong winds are also possible with the rain.

The forecast for the Bank Holiday Weekend is uncertain, with regard to both temperature and rainfall. At the moment most indications point to a mild weather scenario with above normal temperatures, but with occasional outbreaks of rain.

Read also: Longford house and farm sold for over €1.6m