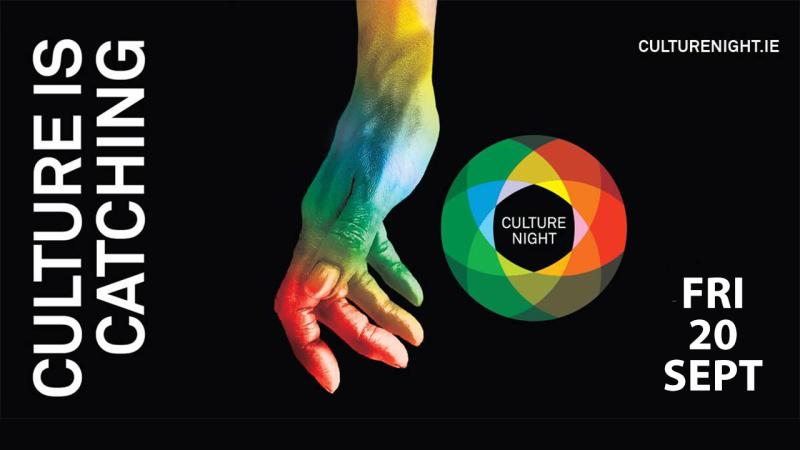 It's so important to keep celebrating our culture and heritage here in Ireland and this Friday, September 20, will see the entire country take part in the 13th annual Culture Night - an event that celebrates culture, creativity and the arts.

On Culture Night, arts and cultural organisations and venues of all shapes and sizes extend their opening hours to allow for increased access to the public. Special and unique events and workshops are specifically programmed at participating locations and everything is available free of charge.

The concept of Culture Night has grown from a relatively small scale cultural event staged only in Dublin in 2006, to the significant national cultural event it is now, with some 400,000 people visiting museums, galleries, historical locations, studios and cultural centres across the island. The initiative has captured both the public imagination and the enthusiasm of artists and cultural organisations.

This free night of entertainment and interest encourages people to celebrate and experience their culture locally, while reminding them about the fantastic cultural facilities and resources that we have locally and nationally.

It raises the profile of cultural activities and organisations that are available locally and encourages people to try new things and to get into the habit of going more often to cultural venues and activities in their locality.

Most importantly, Culture Night makes it easier for people to play a role in their local cultural scene and helps create a sense of community and belonging.

Culture Night happens because many people share a vision and enthusiasm for enjoying, celebrating and promoting creativity and culture. For one night only, the island of Ireland plus select international locations become a free cultural playground allowing you to explore your surroundings.

Here in Longford, there will be a number of great events taking place for free across the county.

A night of short films

Still Voices Short Film Festival in partnership with Backstage Theatre Longford and with the support of Creative Ireland are delighted to announce a special screening of short films for Culture Night 2019 at 8 pm on September 20. The films screening on the night will include the 2019 Award Winners and a Made in the Midlands Selection from this year's festival. The event is free but booking is essential via backstage.ie.

At 8pm on Friday there will be a Culture Night concert held in Blazers Night Club at the Longford Arms Hotel. This event is being organised by Paul Hennessy of Evolution Stage School and plays host to a fantastic array of young musicians, singers and dancers. Tickets can be booked via eventbrite.ie.

Read also: One day, one man, one bog: TURF at Longford's Backstage Theatre

Granard Community Library will present two separate events for Culture Night on Friday. The first is a traditional Irish music event at 6pm, which will see the John Dungan Branch of Comhaltas Ceoltoirí Éireann provide an evening of music by local traditional young musicians from the area. This event, like all Culture Night events, is free and booking is not required.

Longford and the Irish Revolution

The second event taking place in Granard Community Library is an interesting lecture by local historian, Bernard Sextion. Bernard will be discussing the Irish Revolution and the role that Longford played in it. This event kicks off at 8pm, is free and booking is not required.

Explore Longford’s Anglo-Norman history with a twilight tour at the Knights and Conquest Visitor Centre in the picturesque town of Granard. With a history dating back thousands of years, the visitor centre is situated beside Ireland’s tallest Norman motte at 544 feet high. The twilight tour takes place between 7pm and 8pm and is sure to be a fascinating event full of historical tales. Booking for this exciting tour is not required.

The Joe Callaghan Branch of Comhaltas Ceoltoirí Éireann play host to a night of traditional Irish music in the Mostrim Arms, Edgeworthstown on Friday from 9pm until 11pm. There will be a variety of great tunes performed on the night. Booking is not necessary.

Longford Library will play host to an art exhibition by Longford artist Gordon Farrell. Gordon’s work is inspired by the stories contained in the Leabhar Gabála Éireann (The Book of the Talking of Ireland). Gordon will give a guided tour of the exhibition to local schools throughout the day. The event is from 10am to 5pm and no booking is required.

Culture Night is brought to you by the Department of Culture, Heritage and the Gaeltacht in partnership with the regional arts offices, local authorities and cultural organisations throughout the island of Ireland.