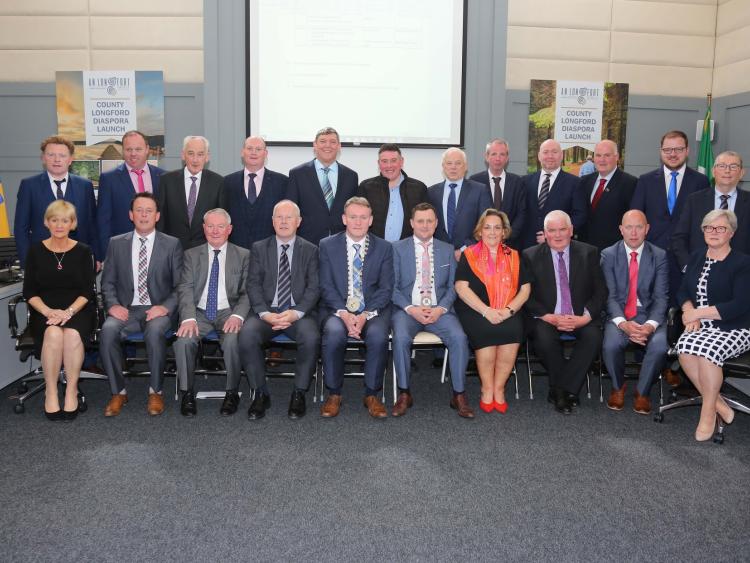 Newly-elected councillors with members of the council

A proposal to have council meetings every two months instead of monthly has been branded “an absolute disgrace” and “an erosion of democracy” by Independent Cllr Mark Casey.

Fine Gael's Cllr Colm Murray, announced the proposal at last week's meeting of Longford County Council, stating that more efficient meetings could be held if they were bi-monthly as opposed to monthly.

The proposal was supported by the Fine Gael side of the room, but councillors in the Fianna Fáil and Independent seats have expressed concern, with Cllr Joe Flaherty labelling the plans a “retrograde move”.

Responding to the proposal, Cllr Casey said that it would be “wrong” to adopt such a plan and that monthly meetings are essential to the efficient working of the council.

Cllr Murray took umbridge with accusation that the council would only be representing the people on a bi-monthly basis, labelling Cllr Casey's suggestion as “crazy”.

“You know that's crazy. You said there that we’re now going to be representing the people every two months. That is not the case. You never stop being a public representative from the day you get elected to the day you lose your seat or stop being a councillor,” he said, adding that emergency meetings can be called when needed.

He also added that Municipal Districts could choose to hold monthly meetings if they wish, which would leave the main meeting free to deal with county issues.

“I think it’s quite a progressive move. When I came in here five years ago, we had monthly meetings starting at 4pm and finishing at 7pm. That’s not the best use of my day,” he said.

“Most of the bread and butter of politics is going to be done at the municipal meetings.”

Cllr Casey was quick to bite back: “I’m sorry that being a councillor gets in the way of Paul Ross’ social life and his work life or whatever it is. But I was elected to represent the people,” he remarked.

“I think it’s Fine Gael’s way of not being accountable to the people.

“This is what we were elected to do. Ye can do all the other stuff that ye do. Ye can tell all your lies. But you come in here, you’re accountable to the people. This is a step backwards. It says that you’re trying to hide something. And that looks bad, boys.”

Fine Gael's Cllr Paraic Brady disagreed with the notion that it was a step backwards.

“It’s not a step against democracy. We have nothing to hide. And I take insult with anybody that says anybody in this chamber has told lies. I do take insult to that straight away. Because I don’t want that nonsense going on here,” he rebuked.

And he wasn't the only one who was insulted. Cllr Peggy Nolan (FG) was quick to point out the absence of many councillors at the end of previous meetings during the last term.

“It would be fascinating if the press would just, on one occasion, look around this chamber at the end of a meeting and see how many councillors are actually here.

“If you’re that interested in democracy, stay here from the beginning until the end. I’ve often been in here with two other councillors. I’ve never left a meeting early. So I don’t know what you’re talking about, diluting democracy. When you look around, you’re diluting it yourselves when you’re not here to the end of the meeting,” she fumed.

Debate was soon brought to a close when Cllr Mick Cahill (FF) made the suggestion to review the situation in 12 months.

“Obviously, your group decides. That’s what’s going to happen,” he said, addressing the Fine Gael side of the room.

“I would suggest, maybe, that we could renew it in 12 months and see how it actually works. Obviously we don’t have a choice. The people have spoken. But I think we should review it in 12 months.”

Cathaoirleach of Longford County Council Micheál Carrigy stressed that nobody was hiding anything or “telling lies”.

“I don’t want remarks like that in the chamber again. So we’ll put it on the agenda. We’ll accept it for 12 months and review it at the next AGM,” he concluded.