Cllr Gerard Farrell takes up the role of leas cathaoirleach 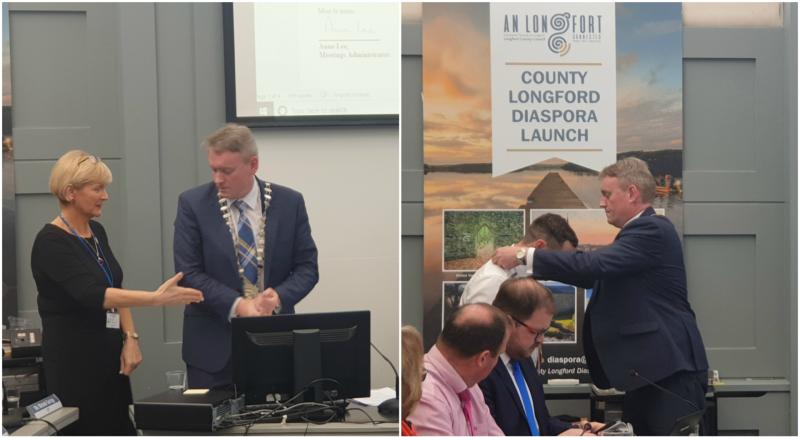 Cllr Micheál Carrigy has been elected cathaoirleach of Longford County Council this afternoon at the council's first meeting of the term.

Cllr Carrigy was nominated by his party colleague, Cllr Paraic Brady, who said that the Ballinalee postmaster has a proven track record when it comes to working for Longford. His nomination was backed by Cllr Colm Murray who agrees that Cllr Carrigy has played a significant role in promoting Longford over the past five years.

Cllr Carrigy thanked his colleagues for the support and also expressed his support for family, friends, supporters and the large crowd of Ballinalee natives who turned out to see him accept the cathaoirleach's chain this afternoon.

Lanesboro man, Cllr Gerard Farrell, was nominated for the position of leas cathaoirleach by Cllr Paul Ross, whose nomination was seconded by Cllr Peggy Nolan, both of whom praised Cllr Farrell for his hard work in the county.

Cllr Farrell thanked his colleagues for the great honour and, after congratulating Cllr Carrigy, said that he looks forward to being there beside the cathaoirleach for the next year.