Literature: Inaugural Longford Literary Month will bring three festivals to Longford throughout May 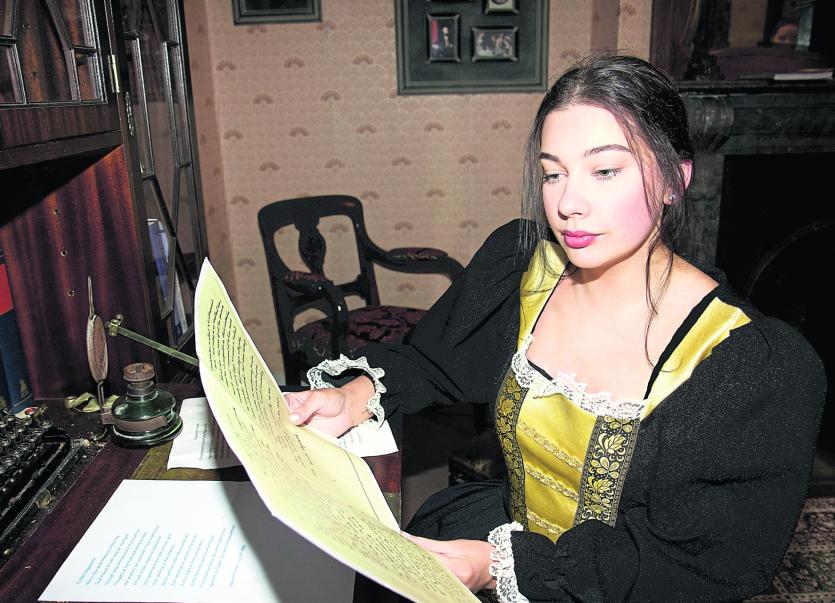 Maria Edgeworth Literary Festival: Beata Dzieciol from fifth year in Cnoc Mhuire Granard at the launch of the festival on Monday

This May, Longford will be a literary haven as the county celebrates some of its most recognisable writers, past and present, in the first ever Longford Literary Month.

The month of May will be packed with a variety of literary events, trails, tours and workshops ensuring there will be something for absolutely everybody.

The inaugural literary month has been organised in conjunction with Creative Ireland and Longford County Council and author of bestseller, The Cow Book, John Connell has been announced as Longford's first Literary Ambassador.

Events kick off on Thursday, May 2 with Poetry Day Ireland 2019 seeing a number of readings with a selection of Longford poets take place in Longford Library.

The life and work of Longford writer ‘Leo’ Casey will be the topic of conversation on May 7, with local historian, author and librarian Gearoid O'Brien.

The first of three festivals will kick off on Sunday, May 9, as Edgeworthstown plays host to the Maria Edgeworth Literary Festival.

“This is our 24th Maria Edgeworth literary festival. We started back in 1995,” said festival chairperson Angela Tuite at the festival launch on Monday evening.

“At that time, it was just an idea to celebrate the literary heritage of the Edgeworths here. And I'm delighted to say that 24 years on we're still going strong and not only is it national, but it's internationally recognised.”

This year's festival will take place over four days from May 9 to 12, with a wide range of activities and workshops including a poetry workshop with well-known author Nuala O'Connor.

Born in Dublin, Nuala lives in East Galway and published her fifth short story collection, Joyride to Jupiter, in 2017.

Her short story Consolata from that collection was shortlisted for Short Story of the Year at the 2017 Irish Book Awards.

Her third novel, Miss Emily, about the poet Emily Dickinson and her Irish maid was shortlisted for the Eason Book Club Novel of the Year 2015 and longlisted for the 2017 International Dublin Literary Award.

Nuala's poetry workshop is one that will be well worth attending and will take place from 11am until 1pm on Saturday, May 11 in the Green, Edgeworthstown.

On the same day, award-winning author Paul McVeigh will give a short story workshop at the Old Schoolhouse in Edgeworthstown. This will also take place from 11am to 1pm and both of these workshops will cost €20 to attend.

Paul McVeigh's debut novel, The Good Son, won the Polari First Novel Prize and the McCrea Literary Award and was shortlisted for many others including the Prix du Roman Cezam in France.

The Good Son was also Brighton's City Reads 2016 and was given out around the UK for World Book Night 2017.

Paul began his writing career as a playwright in Belfast before moving to London to write comedy.

His short stories have been read on BBC Radio 3, 4 and 5 and Hollow was shortlisted for Irish Short Story of the Year at the Irish Book Awards in 2017.

He's got a long litany of other accolades and is associate director of Word Factory and the Guardian. He also co-founded the London Short Story Festival.

This year, he also chaired a short story strand throughout the Jaipur Literature Festival in India.

His creative writing classes have sold out in Australia, Indonesia, Ireland, Malaysia, Singapore and around the UK.

He also interviews authors and reviews for the Irish Times and his work has been translated into seven languages.

So he's more than qualified to deliver a top class workshop to any aspiring short story authors on Saturday, May 11.

Read also: Get the sleeping bags ready for Longford's Sleep Out for Simon

Nuala and Paul will both stick around for an anniversary celebration at the Manor Church in Edgeworthstown that evening, where there will be poetry and short story readings.

Award-winning writer and broadcaster Aidan O'Hara will also be a guest on Saturday night, providing story and song to those attending the evening's celebrations.

Also providing music and song will be Eleanor Quaine from Carrickboy.

Most importantly, the festival will celebrate all things Maria Edgeworth, with a lot of historical focus on the Edgeworth family who came to the midlands town 400 years ago.

And, according to Frank Green of Edgeworthstown District Development, getting the festival this far is a huge achievement that should be acknowledged.

“The Edgeworths may have been here 400 years, but they were never more alive than they are now. People are more aware of them,” he said.

There will be a host of other events over the course of the festival including an 18th century costume tea party, an exhibition, the unveiling of art murals on the Granard Road and plenty more.

Booking information for the events can be found at www.edgeworthstown.net.

Longford Literary month will continue with the Padraic Colum International Gathering from May 17 to May 18, with readings, music and other celebrations to take place over the two days.

The annual Goldsmith International Literary Festival will take place in Ballymahon and surrounding areas from May 31 to June 2, bringing the inaugural Longford Literary Month to a fitting end.

There will be a range of other events throughout the month, including a talk by author of Ithaca, Alan McMonagle, on getting published.

A number of creative writing and story workshops will be given by the likes of John Connell, Dani Gill, Darragh Coady, Eileen Moynihan, Valerie Masters and plenty more.

All workshop details can be acquired from Majella at 043 33 41124 or by emailing creativeireland@longford coco.ie.