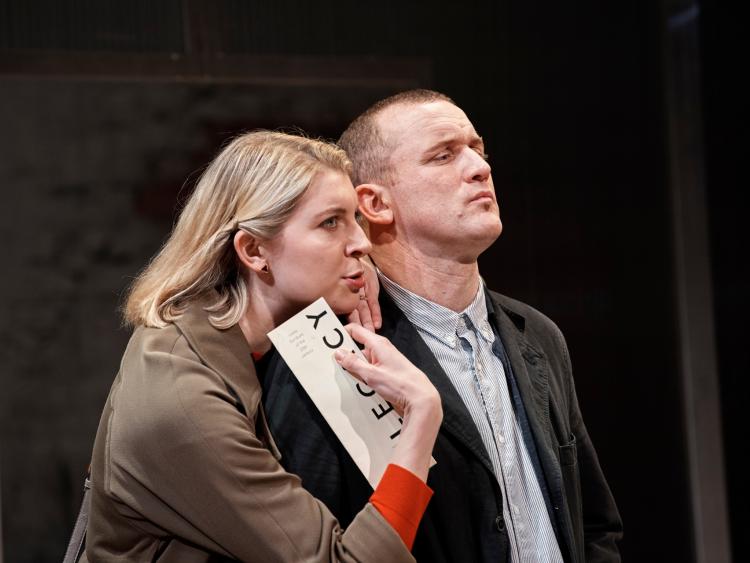 Rory Nolan and Kate Kennedy in character as Ed and Alex

Touching, funny and sophisticated, with lots of heart: those are the words actor Rory Nolan used to describe Druid Theatre Company's current production, Furniture, which comes to the Backstage Theatre later this month.

Written by Sonya Kelly, this lighthearted new play is about perceptions and possessions, told through the lives of six individuals and examining how the things we own shape our worldview and even the view we have of ourselves.

The play received a staged reading in 2016 as a Druid Debut and had its world premiere as part of Druid's remarkable season of new Irish writing at Galway International Arts Festival 2018.

“Longford is one of our stop-off points whenever we're on tour with Druid,” Rory Nolan remarked when in conversation with the Leader last week.

“We always have a great time there and there seems to be a real hunger for the shows every time we come down and the audiences are great fun.

“And we often meet a lot of people who come to see the shows in Longford; they’re a great crowd and they love their bit of culture and their plays and it’s an honour to be able to come down and tour in the country and to take in places like Longford.”

Rory Nolan is well known around the country since he played the role of Ross O'Carroll Kelly in Postcards from the Ledge, but he's portrayed plenty of well-known characters throughout his acting career, including Pozzo in Druid's production of Waiting for Godot, which received excellent feedback from its Longford audience last year.

In Furniture, he will play the role of Ed, an artist, who begins to question his relationship with his wife, Alex (Kate Kennedy), following an incident at an art exhibition.

Furniture is an interesting play because it is actually three plays in one - each one exploring relationships between people through pieces of furniture that connect them.

Ed and Alex appear in the first of the three plays when they attend an art exhibition.

“And one of the catalysts for the piece is when Ed’s wife, Alex, who isn’t an artist, moves towards a piece of art, he says ‘no, don’t touch it!’.

“It’s full of heart and it really makes you think and it’s really very funny as well.”

The second mini play tells the story of two lovers, Steph and Dee (Ruth McGill and Helen Norton), who have met via an online dating app and entered into a fast-moving relationship which sees them moving in together far too quickly.

Steph is big into minimalism, but her new companion is an avid hoarder, so you can imagine what hilarious interactions occur between them during their time on stage.

Finally, the third act examines the relationship between a flamboyant, older, gay man George (Nial Buggy) and his nephew Michael (Garrett Lombard), to whom he wants to leave his beloved pink chaise longue, which has any amount of stories attached to it.

“In some ways, this play does exactly what it says on the tin,” Rory mused.

“And the result is a play that is very touching and very, very smart; very sophisticated but ultimately very funny and great fun, with lots and lots of heart.”