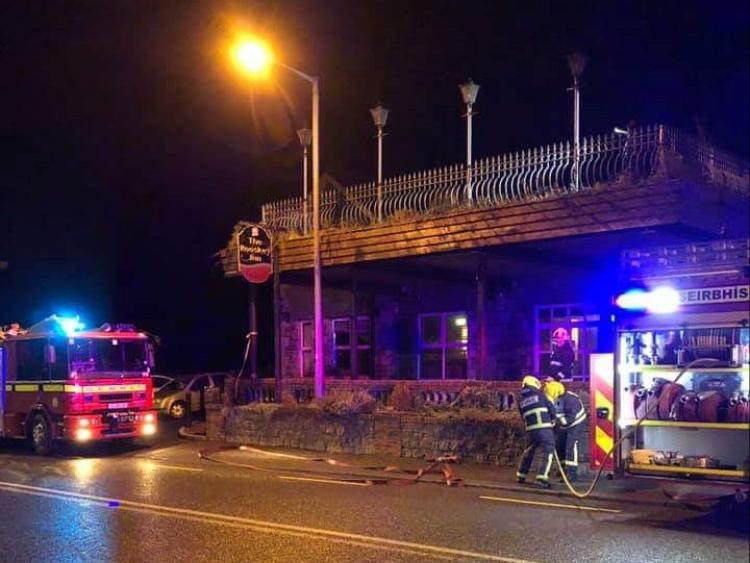 Fire services at the scene of last night's incident in Rooskey.

Gardaí have sealed off the Shannon Key West Hotel at Rooskey as a crime scene after a second attack at the premises last night.

Fire services spent three hours at the scene after the alarm was first raised.

At about 9.30pm last night, Mohill and Strokestown fire brigades arrived at the hotel after a report of an attempt being made to start a fire, with Mohill’s unit remaining there for more than three hours.

The scene has been sealed off and a full examination will take place. Gardaí are investigating claims that a fire bomb may have been used.

Last month, on January 10, there was also a suspected arson attack at the hotel which is earmarked to provide accommodation to asylum seekers.

Meanwhile Leitrim and Roscommon United Against Racism has condemned "what appears to be a second racist attempted arson attack on the hotel.

"We are shocked and saddened yet again by this incident. We want to send a clear message that the tiny minority of people who were involved in these attacks on the hotel and those who support them by no means reflect the vast majority of the people living in Leitrim or Roscommon.

The group added "we ask that all public representatives throughout the country come out, stand united with us and publicly condemn and work to end all forms of racism, whether it be online or in our communities."

Also read: Concerned Justice Minister Charlie Flanagan: 'Too early to say when Rooskey hotel might be ready to accept residents'