Peter Kelly, Longford, was a 'larger than life' character 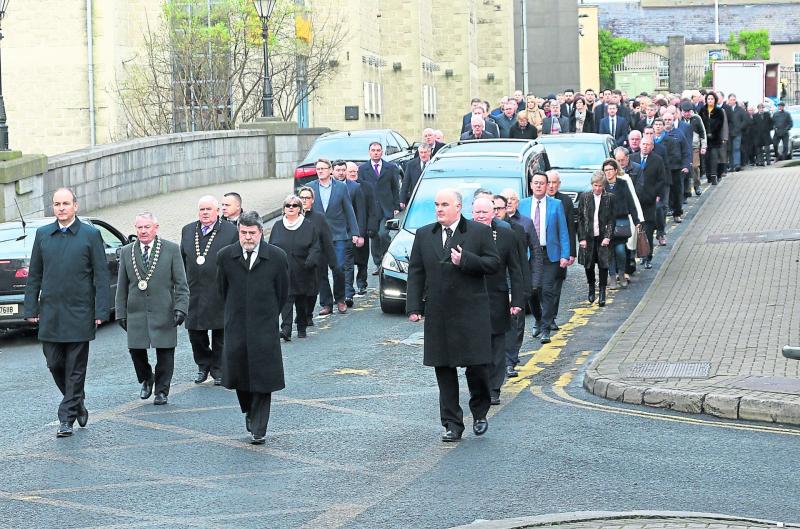 Peter Kelly was a larger than life sort of character. He was a true Longford man and never lost the opportunity to promote the county wherever he was and whatever he was doing.

Those were the words of Fr Brendan O'Sullivan in St Mel's Cathedral on Saturday morning as hundreds flocked to the funeral of well-loved Longford man and former Fianna Fáil TD Peter Kelly.

“Normally at funerals, the Kelly family are taking care of others in the undertaking business but today is our time to take care of you,” he said.

Peter Kelly passed away peacefully on Wednesday night last (January 2, 2019) after a battle with illness.

The town came to a complete standstill on Saturday as thousands of mourners made their way to the Cathedral to pay their respects to the former representative of the county.

A huge guard of honour accompanied the funeral cortege as it made its way through the town, with elected members of Longford County Council and staff, past and present; Fianna Fáil colleagues; members of the local Vintner's Association; the Rugby Club; Tennis Club; and crowds of people from near and far lining up to pay their respects to the former Longford TD.

"He always wanted to leave his community a better place than he found it. His focus was on simplicity - not on the big issues, but on the nuts and bolts of family life," he said.

“Like any life, political life too is no different. It has its highs and its lows. But Peter’s humility carried him through it all graciously with the great love of people and community.

“And they always say behind every good man is a good woman. And certainly, this was the case with you, Maura. You were a great woman. You allowed him to be himself and to do what he done best. He loved you and always respected you.

“And I know that you, Emily, Peter and Joseph… you had a great father who was unflinching in his support for you. He loved each of you and allowed you to seek your own direction. He was always your safety net.

“He would have done anything for you out of pure love. He was proud of you and had a great relationship with you, collectively and as individuals.”

A well-known publican and undertaker, he was first elected to the Dáil in 2002 for the Longford-Roscommon Constituency, taking over from Albert Reynolds who had previously held the seat for Longford-Westmeath.

Peter was re-elected in 2007 for the newly realigned Longford-Westmeath constituency and served there until 2011.

The pews were also lined with local representatives and former Oireachtas colleagues of Peter Kelly.

“As we bid farewell to him today, we acknowledge the legacy that he leaves behind,” said Fr Brendan.

“And we hope that those who follow in his footsteps will keep in mind the importance of family and community in the service of the public. Building up our town and county. Building up our country. Continuing to make it a place of welcome, allowing people to feel at home and to find a home for the homeless.

“Keeping in mind the needs of all in changing times, we thank God for the great community here in Longford and for those who work hard in business, developments and in public office, promoting a new vision for our community in the years ahead.

“For all who work in public office that they may see and respond to the needs of people and families, may we always be thankful for those who touch our lives in a positive way. And we thank you, Peter, for that today.

“We thank you Peter, this day, and we entrust you into the loving care of God.

“United with your parents and with deceased members of the Kelly and Hester family, may you rest in peace.

“May you continue to inspire us and to enter each day with a generous heart to serve the call of courage and love until we see your face again in that land where there is no separation, where all tears will be wiped from our minds and where we will never lose you again,” he concluded.

The funeral mass was followed by the burial at Ballymacormack Cemetery.