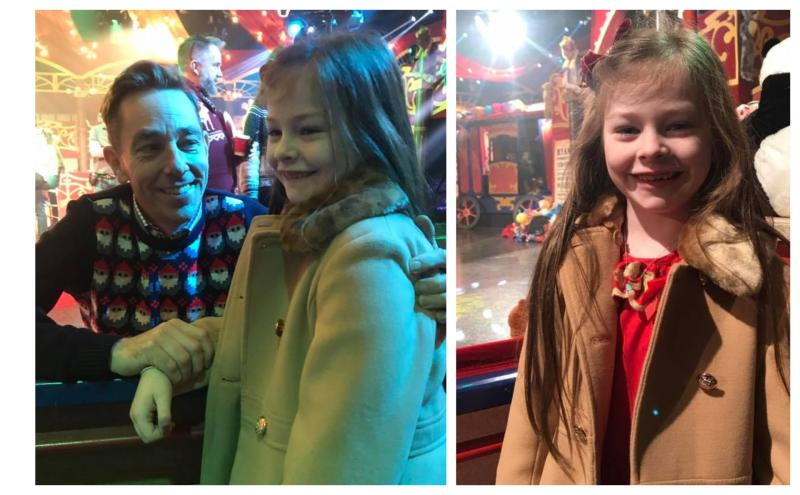 Six year old Longford girl, Freya O'Connor, was a special guest of RTÉ and accompanied by Ryan Tubridy she got a sneak preview to the set of the most magical show on earth...The Late Late Toy Show.

Daughter of Archie O'Connor and his wife, Dr Laura Noonan, who has been to Russia where she has undergone life-saving chemotherapy, Laura posted on her Laura's Russian Lifeline facebook page that it was  was beautiful to see Freya enthralled by the lights, set, cameras, toys and of course the Toy Show Man .... Ryan Tubridy.

Laura says her daughter knows more about empathy than most adults.

"It’s safe to say that Freya hasn’t had the easiest year this year. From being dragged half way round the world with us to watch me going through the most difficult treatment imaginable to being separated from me for weeks on end when I was in isolation first in Moscow and then in Dublin. She missed school, dancing, play dates and Birthday parties all because her going to those things would put me at risk of infection. She never once complained that it wasn’t fair. She never once made me feel guilty for the sacrifices no 6 year old should have to make."

Also read: Longford woman to go on Winning Streak just a month after becoming a mum for first time

Laura explained that Freya has just finished filming a little documentary with RTÉ.

"Yesterday, she got to be Freya ,the 6 year old girl filled with the excitement and innocent wonder of Christmas. It really was the stuff that dreams are made of ... It certainly helped being introduced to everyone she met as being Freya the star of her own film too!"