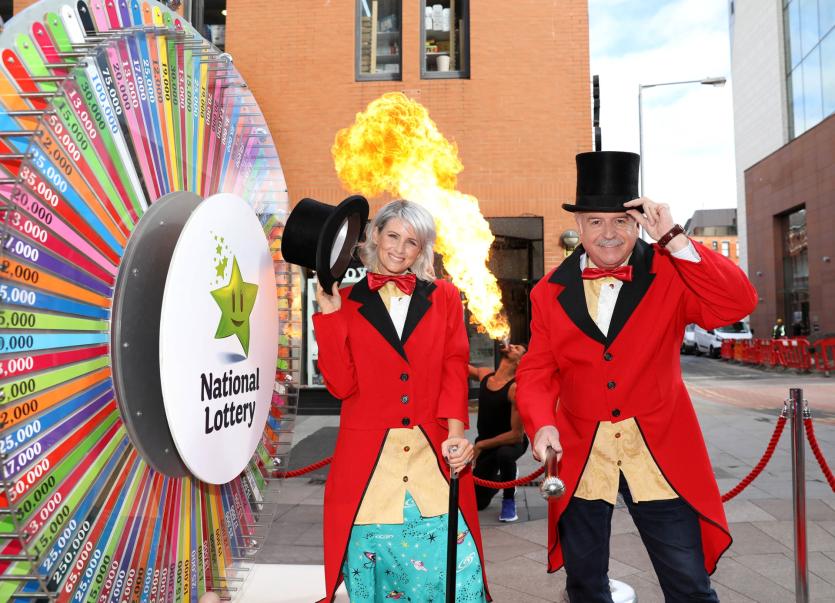 A Longford woman, who became a mum just four weeks ago, is set to represent her own Mother when she appears on the National Lottery Winning Streak game show on RTÉ One this Saturday (December 1).

Caroline Toher, from Longford town, now living in Ballymahon, will represent her mother, Patricia Toher, whose name was drawn out of the drum by Marty Whelan and Sinead Kennedy to appear on the popular game show last week.

Caroline Toher gave birth to her first child, daughter, Zoe, only a month ago and the entire family are over the moon.  Baby Zoe will be staying at home this Saturday as Caroline takes to the Winning Streak stage and will be watching with her dad James. The couple are together 14 years and got married three years ago in Central Park in New York City.

Caroline got a call from her mum on Saturday to let her know the good news. Caroline knew immediately that she would be representing her Mum as years ago Patricia planned “when she got on Winning Streak” Caroline would play for her.

Supporting Caroline in the audience will be Patricia, her dad John and her sister Lisa as well as many friends and family

Winning Streak will be broadcast on RTÉ One this Saturday, December 1 at 8.30pm.

The National Lottery game show, co-presented by Marty Whelan and Sinead Kennedy, will feature some perennial favorite games as well but also brand new games including Play or Pay, Roll for Riches, WinFall and Electric Dream – where one player will win an electric car worth €25,000.

As ever one of the lucky five players will get the chance to spin the wheel and win up to €500,000.  But this series a €100,000 segment will be added to the iconic Grand Prize Wheel every show if less than that was won in the previous show, improving players chances to win a massive prize. Winning Streak will air on RTÉ One at 8:20pm this Saturday.

A brand new-look Winning Streak scratch card is available in the 5,900 National Lottery retailers all over the country, where as well as the chance to appear on the Winning Streak TV game show if you  get three stars, players will also be in with a chance to win some great cash prizes up to €5,000. The odds for those who purchase a Winning Streak to win is 1 in 1.76 to win a cash or three star prize.  Players can also send their scratch card stubs into the National Lottery where each week, on the show, a player will be drawn as the winner of a Luxury Cruise for two valued at €5,000.

The popular gameshow first appeared on our screens in September 1990 and since then a massive 5,975 people have taken part, winning in excess of €170 million in prizes. Almost €5 million was won last season. Winning Streak is the second longest running game show in Europe.

The other Winning Streak players next Saturday (1st December) are:

Ellen Myers from Ballybane, Co. Galway
Peter Kilbane from Castlebar, Co. Mayo
Eamonn Britton from Cobh, Co. Cork
Tommie Coyne from Connemara, Co. Galway
Nearly 30 cent in every €1 spent on Winning Streak and all National Lottery games go back to Good Causes in the areas of sport, youth, health, welfare, education, arts and heritage. In total more than €5.3 billion has been raised for Good Causes since the National Lottery was established 30 years ago. In 2017 alone, the National Lottery raised over €226 million for such good causes.