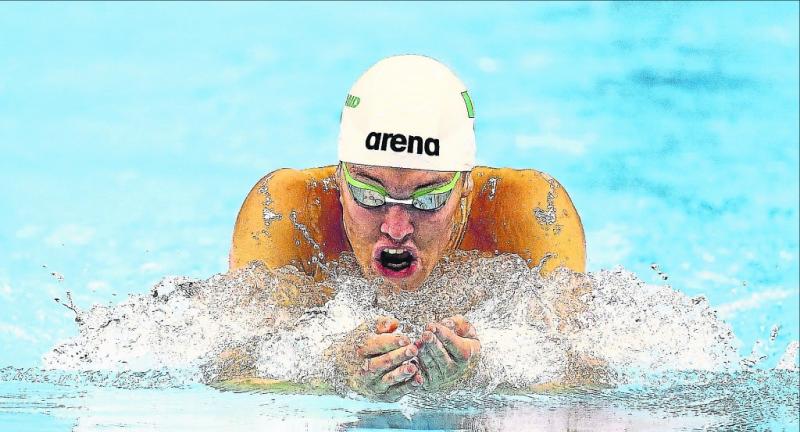 Longford swimmer Darragh Greene is extremely laid-back on dry land but even he must have wanted to do a few dive-bombs with excitement at times this season.

Last April he was the talk of the Swim Ireland National Championships in Dublin's National Aquatic Centre (NAC) after winning three Irish breaststroke titles and setting a new national 100m record of 1:00.21.

He beat Rio Olympian Nic Quinn in the 200m final where he also came close (just four tenths short) to breaking another Irish senior record, this one set by Andrew Bree at the Beijing Olympics 10 years ago.

That was the weekend when Greene suddenly became a big fish in the relatively small pond of Irish swimming and saw for himself the full effects of the major changes he has made to his training and lifestyle this year.

But what he did at his first European long-course Championships in Glasgow in August made even bigger ripples.

Not only did Greene make semi-finals in all three of his events (50m/100m/200m breaststroke), he also became the first Irishman to break the world-class 'one minute' barometer for 100m breaststroke.

His time of 59.92 seconds was also, noticeably, inside the Olympic qualifying time for Tokyo 2020, though, to qualify, he will have to replicate it again closer to those Games.

It was also inside the qualifying time for next year's World Long Course Championships in Gwangju, Korea.

Greene finished fifth, in a dead heat with Russia's Kirill Prigoda, in his semi-final, forcing the pair into a dramatic 'swim-off' for the eighth lane in the final.

Prigoda won their two-man race, clocking 59.39 to Greene's 1:00.44 but, considering it came just 40 minutes after Greene had broken the magical minute mark, and that it was his third swim in one day, he was not too despondent.

“That Russian is a previous World medallist and he finished fourth in the final afterwards,” he notes.

That is the sort of company the 23-year-old from Newtownforbes is now keeping after his breakthrough season, something he attributes to a change of focus, coach and base in Dublin.

When Briton Jon Rudd took over as Swim Ireland High Performance Director in 2017 he threw down a lot of gauntlets and Greene is one of those who has responded best.

Rudd uses science and comparative tracking to identify and direct talent and, after some physiological testing, established that Greene, who was training for sprints, has a superb engine for longer distances.

So he was encouraged to change his focus and move from UCD to the NAC in Abbotstown, where he's now one of a dozen swimmers training full-time under national senior coach Ben Higson.

From the buzz of living in Belfield's busy college campus Greene is now living, relatively speaking, in the boondocks.
Abbotstown is another sprawling campus but 99% of it is either pitches or facilities like the National Indoor Arena and the Institute of Sport.

There is only one house on the grounds and that is home to the elite swimmers and divers who train at the NAC, about a 20-25 minute walk from the house.

Another 10 minutes would get them across the motorway bridge to the Blanchardstown Shopping Centre, but even that is rarely visited by a crew who train a minimum of twice a-day, six days a-week, and are early to bed most evenings because they are in the water, training, by 7am every morning.

Greene now swims between 45km to 60km a-week, which is double the training-load he had in UCD.
His improvement - over a second faster at 100m and six seconds faster at 200m – has been dramatic and he clearly relishes the physical challenge.

But he admits that a year ago, when he was being told he had Olympic potential, he didn't really believe it until he raced at a big international in France, when he was given new tactics and produced one of his fastest times:“I was really up for it then and told to be really patient.”

The hardest part for him was leaving so many close friends in UCD but he returns there most Sundays. That is his only day off training but he uses it to to earn some money by working as a lifeguard in Belfield.

Dad, Brian runs the family's water conditioning business (The Water Mill) but it was mum Ann (originally from Ardagh) who put all three children “into swimming lessons, in Longford Swimming Club, to get us water safe when we were young” Darragh explains, praising early mentor Liam Deeley for giving him a great start.

Aishling (21), a student nurse in DCU, now plays gaelic football for the county while Rían, in his Leaving Cert year in St Mel’s College, is into basketball.

Darragh played plenty of both, plus hurling and soccer, with St Mel’s and Clonguish GAA and actually didn't concentrate on swimming until Transition Year, which may also contribute to his late blossoming.

After completing a two-year diploma in Sports Management in UCD, he concentrated solely on swimming this year but has recently added to his hectic workload by starting a Sports Science degree in DCU which is flexible about fitting in his studies around that exhausting training schedule.

“It probably is a bit mad to outsiders,” Greene acknowledges. “You have to train six days a-week, twice a-day, plus three gym sessions a week, and have no social life.

“I rarely get home to Longford but that's just what you have to do. Swimming at this level probably takes a certain mind-set and if you don't put it all in, you won't get out of it what you've put into it. I've learnt that.”

He is on a scholarship in DCU and gets a variety of supports from Swim Ireland but hasn't yet got any individual funding (called 'carding') from Sport Ireland (formerly the Sports' Council) because those grants are largely based on winning medals at European level or higher.

Greene will finish 2018 as one of just five Irish swimmers at the World Short Course Championships in Hangzhou, China from December 11-16.

That'll be his first time ever to race at 'Worlds' but he's competing solely to prepare him for the long-course equivalent in Korea next year.

Not even Christmas will be used as a chance to slack off, though he will get a wee break for the festivities.

“Ah definitely, I'll get home for a few days off but not too many because we're off to Tenerife, for two week's warm-weather training, just before New Year.

“You're not going to get a few chances (to qualify) for the Olympics. They're only every four years so you want to be on it and this is all designed to do that. It is a hard process, but sure if it was easy everyone could do it!” he smiles.

** If you are interested in supporting Darragh Greene on his road to Tokyo 2020 please contact Trish in Swim Ireland on PR@swimireland.ie

Longford Lives: Fiona Egan connecting to the land and experiencing the divine