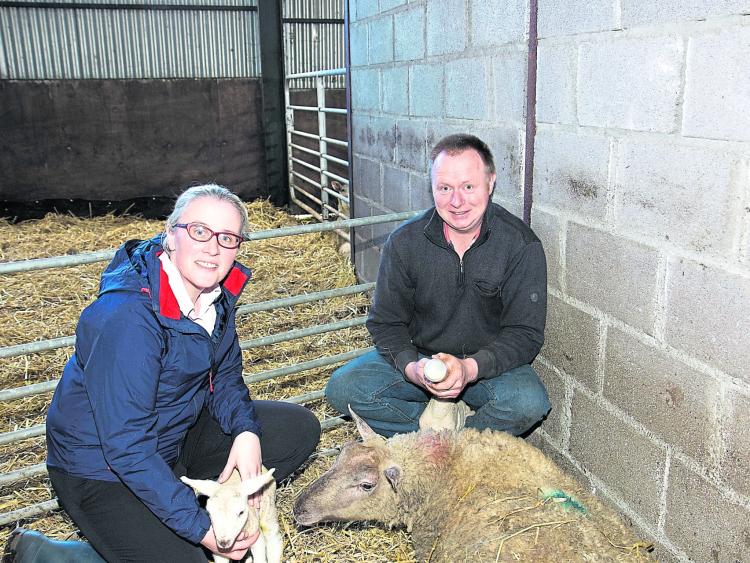 Fiona and her husband Michael keep a watchful eye on their sheep flock at Cloughan Farm.

So, when the Leader sat down to chat with well known Co Longford plough woman and rising star on the organic food scene Fiona Egan, it was her spirituality and deep connection to the self that left the biggest imprint.

Fiona says her connection to the land and the opportunities her own farm has provided her with to create, nurture and care for food from its infancy right up to its arrival on the kitchen table, has brought a stillness and a calmness to her soul that she never thought possible.

And this very special truth, she knows, can and will change lives for the better.

Her farm and cookery school - Cloughan Farm and Cookery School - which she co runs with her husband Michael Farrell lies nestled in the heartlands of Abbeyshrule - an area in Co Longford that is surrounded by prime land, historic buildings and geographically significant rivers and streams.

It is an idyllic location at the very heart of Ireland that simply and quietly promotes stillness and mindfulness - an ancient form of staying in the present moment - while the rest of the world grapples with that very same concept.

Incidentally, her father Eamon is highly respected in the country’s ploughing circles and her mother Ethine was also deeply involved in both the ploughing and the land.

And as they say, the apple doesn’t fall far from the tree, an old adage that certainly rings true for Fiona.

So, believe it or believe it not it’s 30 years since Fiona Egan participated in her first local ploughing match.

Her memories of that day and the lead-up to the big event are both hilarious and full of affection in what is an open and honest discussion with the Leader.

History was absolutely unfolding that day in Ballinalee, but the Kenagh native didn’t know that yet!

“I remember the little field in front of the house where daddy had put up the poles; it was very funny because when I sat up on the tractor I was told to drive straight,” she recalled smiling.

“I thought to myself this is an old tractor and if I just hold the steering a certain way it will go dead straight for the poles!”

Well, that didn’t just go according to plan for Fiona and the tractor instead ended up travelling in the complete opposite direction of the poles...

“That,” she adds, “is my first memory of getting some practice in for competitive ploughing.”

Meanwhile, there was only a week to go for that year’s Co Longford Ploughing Championships which were all set for Ballinalee, and the teenage Fiona Egan was determined to shine on the day.

So, seven days later when she set of with gusto and a pep in her step, alongside her beloved daddy, she felt on top of the world.

When she got to the ploughing though, she lost her nerve and became shy and self conscious.

She needed her all-knowing father to snap her out of it, something he did fairly quickly it has to be said.

“I was very shy and very nervous; I remember I was at the top of one headland and I turned to daddy and said, ‘I’m not going down there - there are too many people and I’m too nervous’.”

She laughs now at that moment in history as she looks back on what was a very different time in Irish rural life.

Fiona added; “Daddy turned round to me and said ‘will you go on outta that’ and so I just took of.”

Needless to say, the south Longford woman has been looking forward to the event since that historic day. She also recalls another life changing moment on the same day.

“There was a lovely man there - I think it was Paul Donegan from Kilbeggan and when I finished the ploughing I hopped down from the tractor, very proud of myself altogether,” Fiona smiles, before pointing out she very quickly learned that she was spotlessly clean and showing signs of having done very little of the hard graft that comes with a ploughing competition.

“Paul Donegan said to me ‘you’re a very clean competitor for one that’s after ploughing a plot', and I said to myself in that moment, the next time I plough, I’ll do it all myself!”

And of course her determination and gusto won out in the intervening years and she subsequently picked up many ploughing accolades along the way.

Fiona is now one of the top plough women in the country.

She has also been the Co Longford Queen of the Plough on numerous occasions, clinched lots of All-Ireland titles along the way and even became the Northern Ireland Ploughing Champion too.

She says that when it came to the ploughing she and her father were a team - he the coach, she the competitor, and there is no doubt that it was her father’s influence that sealed her passion for and fate to the land.

“When daddy retired from farming, he decided to relive his childhood and bought a pair of working horses; he broke them in then, and of course this was all very new to me; but daddy started to compete with the horses and it was hugely influential on me,” she adds, before pointing out that last year Eamon suggested she compete herself in the horse class at the Co Longford Ploughing Championships, which incidently are the next biggest outside of the national event.

“When I thought about it, I realised that it was something I should do and the difference between that and tractor ploughing is stark.”

It’s perhaps this new departure into horse ploughing that brought Fiona Egan closer to the soil and when that happened her passion deepened and the nurturing side within her took over.

“Horse ploughing is very different to ploughing with the tractor; but the aspects that appealed to me were working with the horses - you are so close to the soil with horses and not sitting on the seat of a tractor; you are there with your hands on the handlebars actually ploughing,” she says.

“For me as well there is something very sacred about ploughing with a horse.”

And it is this sacredness that appears to be at the very heart of Cloughan Farm and Cookery School.

Indeed anyone that knows Fiona Egan, knows too that her heart is not only steeped in the land but also deeply attached to it.
She is adamant that traditional ploughing methods carried out on her own family farm when she was growing up influenced her as well, naturally.

But she adds also that in more recent times those influences are becoming more and more evident at her cookery school, which is attracting people from all over the country!

All of this is probably, in no small part, emerging too as a direct result of the sheep and cattle farm that she and her husband Michael run together.

The farm also boasts hens, fresh eggs, pet lambs, pigs and food that is coming to the table either directly from the soil or from the many animals and foul there.

“Even when I see now how quickly food is produced these days it sends alarms bells ringing in me; I feel there is a complete disconnection between producing food and consuming it.

“As a chef I love to know food and look at how it is being produced; I think the horse ploughing has allowed me to gain so much insight into that.”

So, really it's no surprise at all when you see the number of people from all over Ireland that are now descending on Cloughan Farm and Cookery School.

And Fiona too seems very humbled by it all.

“Watching adults return to the land and connect to the soil, nature and even the animals - for me it’s spirituality at its best and wonderful to see.”

Fiona also says that it’s very difficult to put into words what exactly it is that people experience when they eat the very food they have sewn, grown or produced themselves.

“It's about nurturing and caring for that food and then bringing it to the table where again people can connect through the pleasure and enjoyment of that food,” she smiles.

“Not an ounce of that food will be wasted and that is the difference between growing it yourself and buying it.”

Passionately, Fiona adds; “Even now when you dig the first potatoes, all you want is a plate of lovely flowery potatoes and nothing else - the utter satisfaction that comes from that one plate of potatoes is actually unbelievable, divine in fact!”

Meanwhile, down on Cloughan Farm, Fiona and Michael work their food production and the seasons in conjunction with each other.

“In winter time for example, we would have more turnips which would be a good sustainable food, whereas in summertime we would produce an abundance of vegetables,” she continues.

“In the cookery school we are definitely learning as we go along, but it has been amazing so far.

“I find that in order to move forward in the cookery school, I have to look back sometimes; my father and his knowledge of the land and producing good food is the link to that.”

There is no doubt but Fiona and Michael have created something very special in Abbeyshrule, and it certainly appears that the duo are providing plenty of food for thought on many levels there too!

Check out fionaegan.com for more details!