Longford woman recalls the night she suffered a stroke 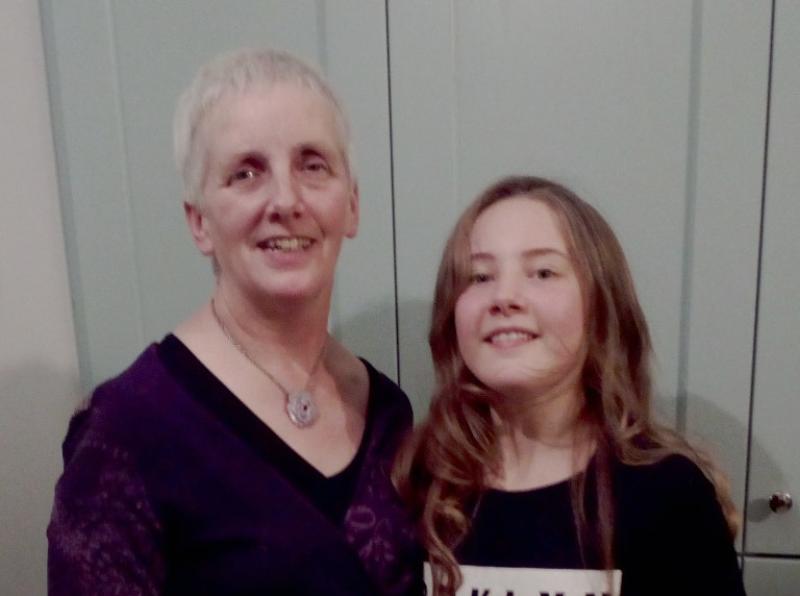 Ballincurry woman Bernadette Quinn is pictured with her granddaughter Réaltin Quinn from Dungarvan.

It was a Sunday in 1983 when a young Bernadette Quinn realised something wasn’t quite right.

The 24-year-old Ballincurry woman was doing some wedding planning with her sister and was suffering a headache all day.

“It was the day my sister wrote out the invitations for her wedding,” Bernadette told the Longford Leader earlier this month.

“I’d had a headache all day that Sunday and I took two and went to bed. But I woke up in the middle of the night and I knew I was going to be sick.

“I got up and I threw up so I took two more and went back to bed,” she recalled.

What the young woman didn’t know at the time was that those tablets may have saved her life, because later that night, Bernadette had a stroke.

“It was like there was an explosion in my head,” said Bernadette who, at the time, had four small kids.

“I lost all feeling in the left side of my body - my sight, my feeling, my coordination was all gone.”

In a panic, Bernadette woke her husband to tell him what was happening: ‘I had a headache earlier; it’s gone now but now I can’t feel my left side,’ she told him.

‘Well it’s there,’ he responded and Bernadette explained that all of the from that side of her body was completely gone.

“So he started to panic,” she said, before explaining that, back in the ‘80s, people weren’t quite as well-equipped to deal with this sort of thing as they are now.

“It was 1983, there were no phones locally, so my husband had to run to his mother’s house and then run to get the doctor.

“The doctor came out and looked at me and said it looked like a stroke, but he couldn’t be because I was too young to have a stroke.

“So he said he’d try and get me to Dublin, and if he couldn’t get me up there, it would be Mullingar. But Mullingar would only take me for a few days. Well, fair play to him, he got me a bed in St Vincent’s up in Dublin,” Bernadette recalled.

The stroke was a huge event in Bernadette’s and one that could have caused her death had she not been so lucky. But there was still only one thing on her mind.

“On my way in on the stretcher, I said to them ‘I have to be out of here in six weeks’. They asked why and I told them I had my sister’s wedding. ‘There’ll be other weddings,’ they told me and I said ‘Yes, but not this wedding’,” she told the Leader.

Fortunately, they did let her out for the wedding, but she had a lot of work to do before then.

“The support there was brilliant. They got me back on my feet for my sister’s wedding. They wanted to give me a walking stick but I said I wouldn’t take a walking stick. So I was walking for the wedding and I wore the dress and it was great.”

At the age of 24, it was a shock to Bernadette and her family that she’d had a stroke. It took her 12 months to get back to anywhere near normal, she explained, but walking down the aisle for her sister’s wedding was so important to her.

“I think a positive mental attitude is very important for recovery. And having goals - no matter how small,” she said.

“When I was learning to walk again, I’d have my husband walking down the corridor with me. He’d walk in front of me and hold my hands and say ‘lift your left foot, move it forward, put it down, now your right, now left’ and it went like that until I was able to do it. Small steps.”

She continued her physio and occupational therapy at St Joseph’s in Longford but it was a slow process. Even now, she said, there’s one loss that still affects her day-to-day life.

“When I was learning to drive, my instructor told me I’d be great. But then I went to pull out and a car came from the left.

, it was a dual-controlled car I was driving, so the instructor stopped it.

“He said ‘did you not see that car coming from the left?’ I didn’t. After that, I had a serious think about it and decided that it (learning to drive) wasn’t worth the risk to me or the risk to other road-users.”

Bernadette now does everything she can to ensure she lives her life to the full in a healthy and active way.

“I’m out walking about two miles most days. I have to keep myself mobile. I’ve been doing exercises with the Arthritis group here in Longford too. I’m doing chair aerobics and aqua aerobics and I’ve found that very helpful,” she said.

“A healthy diet is also important and one should follow doctors’ and professionals’ advice.”

One thing Bernadette can’t ignore is the fact that there is so much more knowledge about strokes today.

The Act FAST campaign is hugely important, she says, and people should think of it if they suspect someone is having a stroke.

“Back then, there was nothing about strokes. Cholesterol wasn’t even mentioned to me when I was in the hospital.

“And it was the that moved it. I was helping myself without even knowing. I was very lucky. There was somebody looking out for me that day,” she recalled.

But, back then there was a serious lack of supports and services available to stroke survivors.

“Back in the ‘80s, once you were discharged, you were on your own, but it’s not like that anymore,” she said.

“I was talking to a man who had a stroke before Christmas and he said he was on his own. I told him to come along to the support group we have here in Longford.

“It’s an open support group in the civic room of the Temperance Hall and it takes place on Tuesdays from to .

“Koriena is the coordinator’s name and she does a series of exercises with us from for 30 minutes and then she goes to Roscommon and other places to do the same.”

The support group is organised by the Irish Heart Foundation, a group whose mission it is to play a leading role in improving the cardiovascular health of people living in Ireland, so they do not experience disability or die prematurely from heart disease, stroke and other blood vessel diseases.

The open support group welcomes new members and encourages anyone who has had a stroke to attend between and on Tuesdays in the Temperance Hall.

For more information on the Irish Heart Foundation, see www.irishheart.ie.

FAST - How to identify the warning signs of a stroke

FAST is an easy way to remember and identify the most common symptoms of a stroke. Recognition of stroke and calling the emergency services (999 or 112) will determine how quickly someone will receive help and treatment.

Getting to a hospital rapidly will more likely lead to a better recovery.

F - Face: Ask the person to smile. Does one side of their face droop?

: Ask the person to raise their arms. Does one arm drift downward?

S - Speech: Ask the person to repeat a simple phrase. Is their speech slurred?

Meetings of the Longford Stroke Support Group take place every Tuesday from to at the Temperance Hall, Longford. Contact: Koriena Ivers. Tel: 086 360 1509