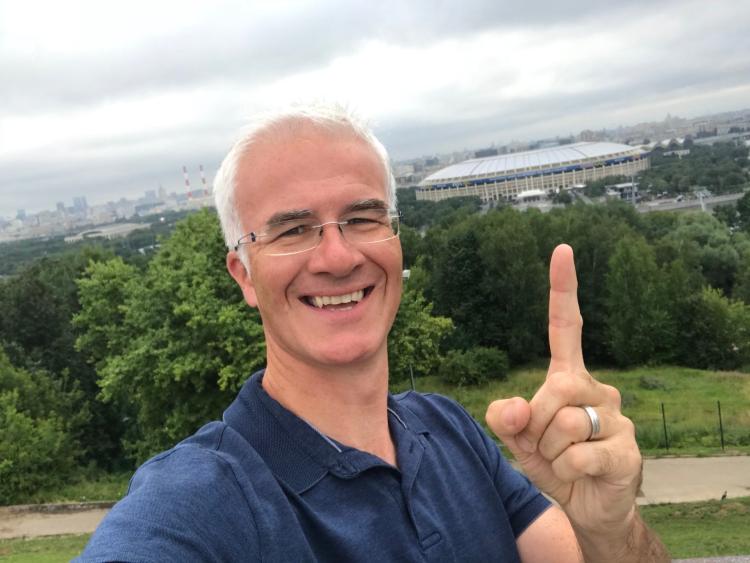 A Sky News correspondent, with strong links to Longford, has hit back at keyboard warrior trolls that have targeted him over his FIFA World Cup coverage

Enda Brady, whose father Michael Oliver Brady hails from Ballinamuck, is in Russia covering the finals and he penned a message in response to those that have abused him online.

Enda was reared in Co Wexford, and in his youth, he spent his summers and holidays in Longford.

Also read: A Sky News journey that began in Longford

Enda posted the following statement in response to the trolls:

"This is a polite message to all of the people who have taken the time to find me online over the last five weeks in Russia and send me abuse.

I'll keep it simple for you - I'm getting paid to be at a World Cup and you're on your laptop.

Truly one of the funniest things about covering this tournament has been the number of nasty messages I've received from people who were too scared to come out here.

Maybe it's time to get off your little computer, put down your newspaper and broaden your outlook.

On a train from Moscow to St Petersburg and @henrywinter said he enjoyed my little message to the trolls. Job done #WorldCup

Every single time I've checked my Twitter feed over the last month they've been there. Has it upset me? Not in the slightest. Russia has been out-of-this-world fantastic and I'll take away memories that will last a lifetime.

So what is it about an Irish accent covering an England football team that so enrages the keyboard warriors?

I've had abuse from people in Ireland, Scotland and England, with one guy describing me as a "Quisling" for having the nerve to wish England good luck ahead of their semi-final against Croatia. Seriously? Comparing me to a Nazi collaborator?

Here's the thing - I've spent 25 years studying, working and living in England and if I want to wish the team well, I will.

They're a great bunch of lads who have been brilliant ambassadors for their country out here. It has been a privilege covering their time here.

So why did I wish England good luck?

I worked on the turnstiles as a teenager at Preston North End when I was penniless and struggling to pay my way through college.

I've enjoyed watching English football over the years and like millions of migrants, I've made a life in England. And I'm proud of it. I support Liverpool, I love sport and I enjoy my job.

So don't tell me who I can and can't send a good luck message to.

I'd like to write more but I've a World Cup final to prepare for."