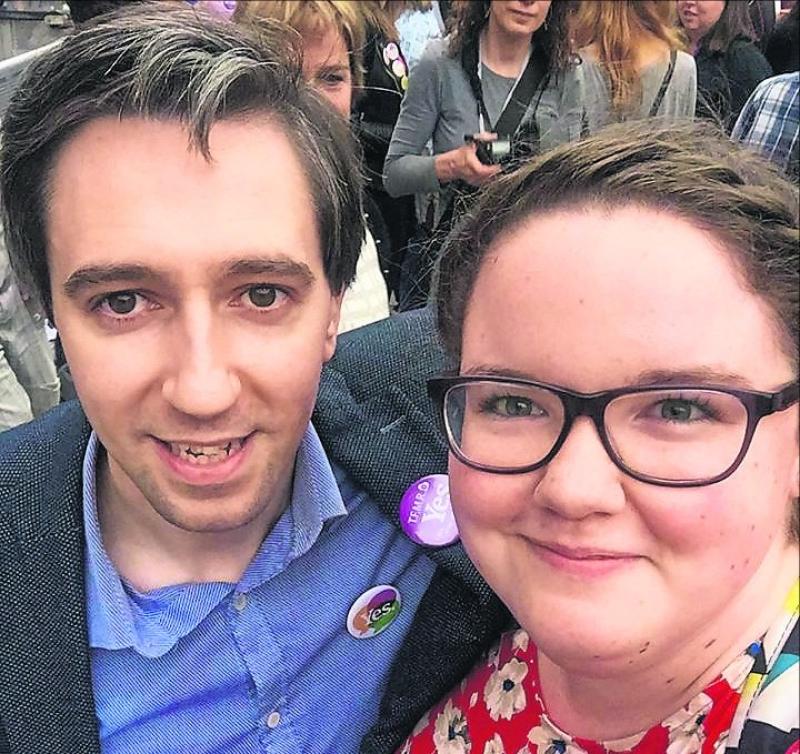 Health Minister Simon Harris and Aoife Carberry pictured at Dublin Castle on Saturday for the announcement of the Referendum results.

On Friday last, May 25, Ireland voted in an unprecedented majority to repeal the Eighth Amendment of the Constitution, which recognised the equal right to life of the mother and her unborn child.

More than 1.4 million people voted 'Yes', relinquishing the control that the State held over pregnant women and their bodily autonomy.

The tension was palpable in Dublin Castle on Saturday. Despite exit polls revealing a notable victory for 'Yes', we remained, as we did throughout the campaign, optimistic, but cautious.

Songs and chants echoed through the courtyard as the seconds ticked by, and county after county, and constituency after constituency returned one resounding 'Yes' after another.

The reaction to the result was nothing less than earth-shattering.

As the Returning Officer delivered the final count in Irish, the crowd erupted. There were cheers, and applause, and many tears were shed; tears of happiness, tears of pure relief, and tears for the women for whom this ‘Yes’ was too late.

One woman in particular was to the forefront of people’s minds that evening, and the chant of ‘Savita, Savita, Savita’ that rang through the courtyard brought home the gravity of this referendum.

No-one could have anticipated this outcome. Both ‘Yes’ and ‘No’ campaigners were prepared for a closely-contested battle following a long and arduous campaign. Even more surprising still was the response of rural Ireland, who shocked their city counterparts with a proud and unwavering ‘Yes’. Donegal was the only constituency to return a ‘No’ majority, but even that was on a narrow margin.

This is thanks, in no small part, to groups such as Longford Together For Yes, who carried out a respectful but wholly effective campaign. They travelled the length and breadth of the county, held events and started conversations.

We must also remember the courageous women who shared their own experiences of the Eighth Amendment; some of whom were telling their stories for the very first time. The faces and names of the campaign who had, up until now, been sworn to secrecy for fear of condemnation or even imprisonment, tipped the balance in the undecided minds, and brought the reality of the Eighth Amendment to light.

This ‘Yes’ vote will change our legislation. Already outlined and scrutinised throughout the course of the campaign, the proposed legislation will save the lives of many, and will offer comfort, compassion, and care at home to those who need it most.

This ‘Yes’ changes our law, but even more crucially, the personal stories, the #hometovote journeys, and the outpouring of love, support and togetherness that was evident throughout this campaign will change minds. Before the legislation comes to pass, Irish women will still find themselves faced with crisis pregnancies.

Some will have to make a journey to the UK, others will opt, by choice or necessity, to use abortion pills. But this time, they will not have to do it alone. 1,429,981 people have made sure of that.

In the words of Health Minister Simon Harris; “Under the Eighth Amendment, we said to women in crisis; ‘take the boat, or take the plane’. Today we say: Take our hand’.”