A world first for Longford on National Poetry Day 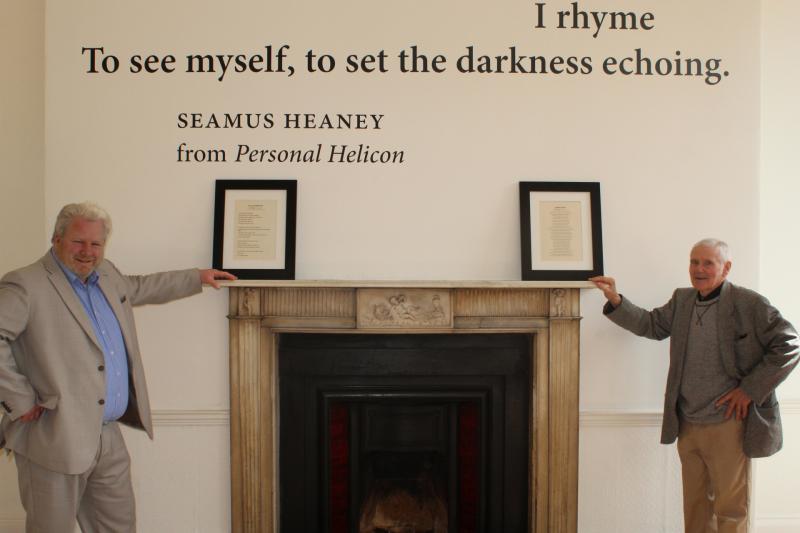 The contest, organised by the Irish Men’s Sheds Association in conjunction with Poetry Ireland, attracted entries from dozens of men’s sheds members, spread throughout the entire island.

Eoin’s winning entry is entitled On a Cold Winter’s Eve, and powerfully evokes the starkness of winter and the solace of home. Acclaimed poet, playwright and author Dermot Bolger, who judged the competition, was effusive in his praise for Eoin’s poem: “What I loved about the poem was how it conjured up a twilit desolate winter landscape, and then the expectation and sense of warmth that any wanderer feels when they come within sight of home. It manages the deft feat of being about isolation and about companionship at the same time”.

Speaking at the prize-giving ceremony in Poetry Ireland’s Parnell Square offices, Eoin expressed his delight at emerging on top of a very competitive field. As well as a framed copy of his poem and subscriptions to Poetry Ireland publications, John received a copy of Francis Ledwidge’s collected works and a first edition of W.B. Yeats’s Dramatis Personae. “It’s great to receive these gifts”, said Eoin, “and it’s great to come here and meet other members of other sheds. Connections like these are what the men’s sheds are all about”.

Second place went to 89-year-old Donald McKenna of Keady Men’s Shed in Co. Armagh, with his lively and nostalgic poem, “Living in the Past”. John Walsh of Oranmore Men’s Shed picked up third place with “The Shed”.

Maureen Kennelly, Director of Poetry Ireland, said: “Our job is about connecting people to poetry, so to be connected to a very well-regarded organisation like the Irish Men’s Sheds Association is a source of great delight for us. We’re about public engagement and promoting excellence, whether that’s through reading, writing or listening. Encouraging new writers and new readers is really important to us."

Barry Sheridan, CEO of the Irish Men’s Sheds Association, remarked that “the quality of the poems shows the creativity and the range of knowledge and experience that exists within the men’s sheds movement, and we were delighted to partner with such a prestigious organisation as Poetry Ireland”.

On a Cold Winter’s Eve

Out on the lonely mountain
Descending from the windswept heights
Walking along and keeping an eye on the dog.
The rough stone underfoot
The small walls to climb over
And then the big field to cross.

Up the narrow path through the stunted trees
And then the bit of road before cutting across the open country again
And where’s the dog gone to now?
A piercing whistle, a flash of movement and there he was.
And now the rain began.

First it fell softly, then ever heavily more.
And cold. And wet.
Head lowered down against the wind now.
And then a bark and the dog leapt forward.

Eyes lifted up to be greeted by the lighted window.
A soft smile.
He was almost home.