Derek Cobbe will feature on the 'National Treasures' programme on RTÉ One TV this Sunday, April 29 at 6.30pm 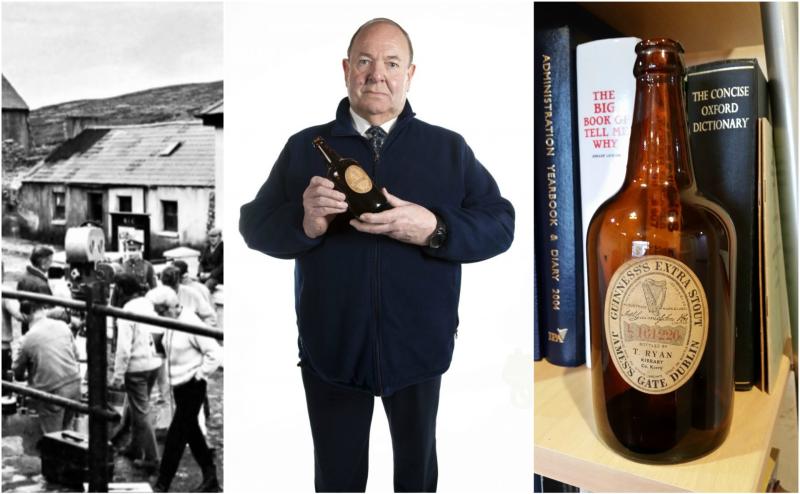 Derek Cobbe pictured with the unique ‘Ryan’s Daughter Guinness Bottle’, with an authentic 1916 label. Derek will feature on Sunday's 'National Treasures' programme on RTÉ One television.

A unique Guinness bottle, with an authentic 1916 label, specially produced by the brewery at St James’s Gate, with the name of a publican and a village that never existed, and one that survived when the village was blown up, is one of the unique and interesting items featured in the National Museum of Ireland exhibition, which opened this week in the Country Life Park in Castlebar.

The stout bottle, owned by Longford journalist and businessman, Derek Cobbe, who took part in the Galway recording of the National Treasures RTE television series, has a fascinating story and was just one of the thousands of collector’s items, featured in the television show, presented by John Creedon.

It all started in 1970, when renowned film director David Lean, built a village on the Dingle Peninsula, as the set for his box office blockbuster ‘Ryan’s Daughter’.

The windswept location for the fictitious village of Kirrary, overlooking the wild Atlantic near Slea Head, involved the use of lands of a number of local farmers, and the sturdy village took twelve months to build, to enable the film set stand up to the winter storms on the Kerry coast.

Apart from the schoolhouse, the main building in the village was widower Tom Ryan’s pub, the premises owned by the father of Rosy Ryan, who was Ryan’s Daughter, played by Sarah Miles.

Director David Lean was renowned for his attention to even the smallest detail, and when the pub was being built for the film, he insisted on everything in the bar being authentic.

This included the bottles on the shelves, the glasses on the counter, the fittings in the pub, and the advertising signs.

He contacted Guinness, and asked could they produce stout bottles with an authentic label of the day, and the brewery were more than happy to oblige.

The label, which included a six digit code printed in red, was the 1916 forerunner of the modern day ‘best before’ date, and was in fact the first two digits of the day, month and year of the stout being bottled, but it read backwards just to confuse early twentieth century drinkers.

The red code number on the Ryan’s Daughter bottle is 161226, which means the stout was bottled on the 26th of December 1916.

They also added at the end of the label, ‘Bottled by T Ryan, Kirrary, Co Kerry’, which was the custom of the day when publicans bottled their own Guinness. Not only were the bottles barely seen on the shelves in the film but certainly the label couldn’t be read, but that wasn’t important to David Lean – he wanted it absolutely correct, just in case it could be read!

What was overlooked in the process was the neck of the bottle - the bottles used had a lip for a crown cap and not a cork stopped which would have been of its time, but the show went on, the film grossed $31 million, and nobody noticed!

When the film was completed, the five landowners at Slea Head couldn’t agree on keeping the film set intact, which would have been one of the country’s greatest tourist attractions, and the entire village of Kirrary was blown up, and cleared by the production company, and the land returned to nature and the five farmer owners.

Nothing survived the explosion, except at least one 1916 Guinness bottle, complete with the name T Ryan, Kirrary, Co Kerry, and this is the bottle in Derek Cobbe’s possession and featured on the TV show and National Museum exhibition in Castlebar.

And how did he end up with the bottle in the first place?

Dan, who has since died, gifted the bottle to Derek on one of his many visits to his pub in the Co Kerry village.

The ‘Ryan’s Daughter Stout Bottle’ has been on display on a shelf in Derek’s Longford home for many years and when the National Museum of Ireland and RTE were looking for items for the series and to form their National Treasures archive, the dust was blown off the bottle and it has now become one of the one hundred items selected for their ‘People’s Archive’ exhibition in Castlebar.

You can watch the final show in the ‘National Treasures’ from Galway on RTEOne television this Sunday night, April 29 at 6.30pm.

The National Treasures exhibition is open at the National Museum of Ireland Country Life Park in Castlebar, Co Mayo.