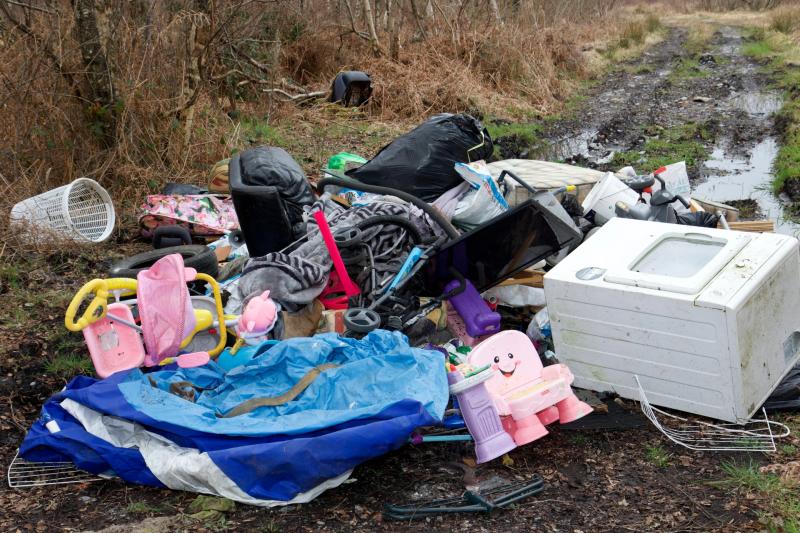 A recent incident of illegall dumping near Newtowncashel in Co Longford. Photo by Michelle Ghee

Longford County Council is set to receive funding of €44,000 under two initiatives to tackle illegal dumping and litter.

The local authority has been allocated €28,000 which will go towards the erection of CCTV surveillance at fifteen locations where illegal dumping is prevalent.

Both initiatives were announced by the Minister for Communications, Climate Action and Environment Denis Naughten TD. The €28,000 funding is from the €1.7m 2018 Anti-Dumping Initiative (ADI) and the €16k is allocated under the €884,000 2018 Anti-Litter and Anti-Graffiti Awareness Grant Scheme (ALAGS).

Minister Naughten said the ADI funding will empower people to take action against those in society who commit criminal acts against their communities by wilfully and irresponsibly dumping their waste and spoiling the most valuable asset we have - our natural environment.

“The 2018 anti-dumping work programme builds on the success of last year. A wide range of clean-up and restorative projects led by community, environmental and sporting groups have been approved for funding.  Successful applications have included projects that will equip authorities with the latest enforcement technologies including overt and covert surveillance equipment and drone technology to target dumpers.  The aim is to reduce illegal dumping by providing funding for projects tackling the problem and to develop an integrated and effective combined approach with local authorities, communities and other state agencies,” added Minister Naughten.

In relation to ALAGS, the Minister said each local authority is responsible for selecting the suitable awareness projects that receive funding and this latest allocation of €884,000 brings the total grants provided under this Scheme over the last 10 years to almost €15 million.

Minister Naughten stated: “I am pleased to announce the allocation of €884,000 under the 2018 Anti-Litter Anti-Graffiti Awareness Grant Scheme (ALAGS). Last year, I increased funding for ALAGS by 28% and this level of funding for the programme is being maintained this year.

Local authorities use this funding to raise awareness and encourage behavioural change to tackle graffiti and littering of all types, including gum, cigarette butts and dog fouling.

Minister Naughten said 'dog fouling' is a particular bugbear of his. "Dog fouling is perhaps the most intrusive type of litter and a constant source of annoyance for us all on our streets, in our parks and on our beaches. I welcome any initiatives that will increase awareness of this nuisance litter and the many public health risks, particularly for children, that is associated with dog owners not picking up their dog’s waste.”

He added,  “Littering is environmental sabotage but money alone cannot solve our litter problems. It takes a behavioural change across the board and I am confident the awareness campaigns that will be funded through this scheme at community level throughout the country will have a real impact."

2018 marks the 20th anniversary of the National Spring Clean (NSC) which is organised and run by An Taisce and co-financed by the Department of Communications, Climate Action and Environment. NSC is currently running for the month of April across the country.