'It's time to catch illegal dumpers in the act', says Longford councillor 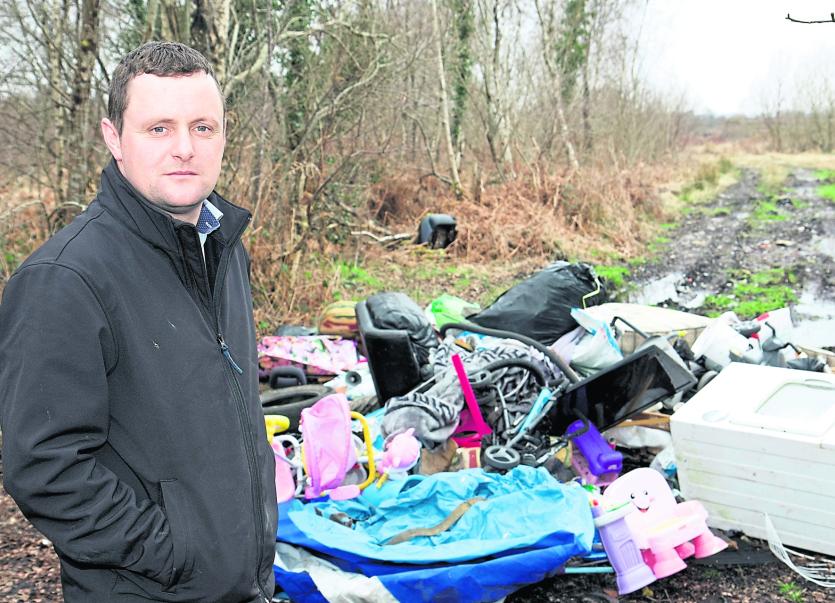 Cllr Gerald Farrell looks at the scene of the latest illegal dumping, this time in Newtowncashel. Photo: Michelle Ghee

There are mounting calls this week for undercover cameras to be positioned in litter blackspots across the county after yet another incident of illegal dumping was reported in one of south Longford’s most scenic locations.

Childrens toys, cooking utensils and the remnants of a muddied tumble dryer were found discarded along the Askey Road, three miles from Newtowncashel by a horrified local resident just over a week ago.

Local Cllr Gerald Farrell said he immediately took it upon himself to visit the area and was outraged by what he saw.

“It’s just horrible. There was a lot of stuff left there that could have easily been recycled,” he said.

Like the Askey Road incident, it was a local resident who spotted the unsightly remains of domestic household waste while out walking in the Farnagh Hill area of Longford town.
That was followed by what has been described as “blatant and strategic” dumping in Dromard last week.

In an email sent to the Leader's offices over the weekend, Dromard Tidy Villages said they had recovered no less than eight pairs of shoes, food and general household waste following an incident last Wednesday evening.

“This is not acceptable and will not be tolerated,” the group stated.

They were sentiments Cllr Farrell endorsed, saying the growing propensity of indiscriminate dumping across the local countryside was starting to spiral out of control.

“This type of carry on in this day and age is just not on,” said the Lanesboro publican.

“There are so many ways to recycle now and to think this happened in the heart of Bord Na Mona’s peatlands along a busy road where people commute to Longford for work and shopping purposes.”

Asked to outline how best to clamp down on illegal fly-tipping activity, Cllr Farrell insisted the time had come for tighter enforcement measures to be ushered in right across the county.

“I just think the only way we can clamp down on these people is to put covert cameras up in (litter) blackspots where this kind of thing goes on,” he added.

“Newtowncashel is a former Tidy Towns winner and to think we are trying our best to promote Longford as a tourism destination, it’s just not on.”