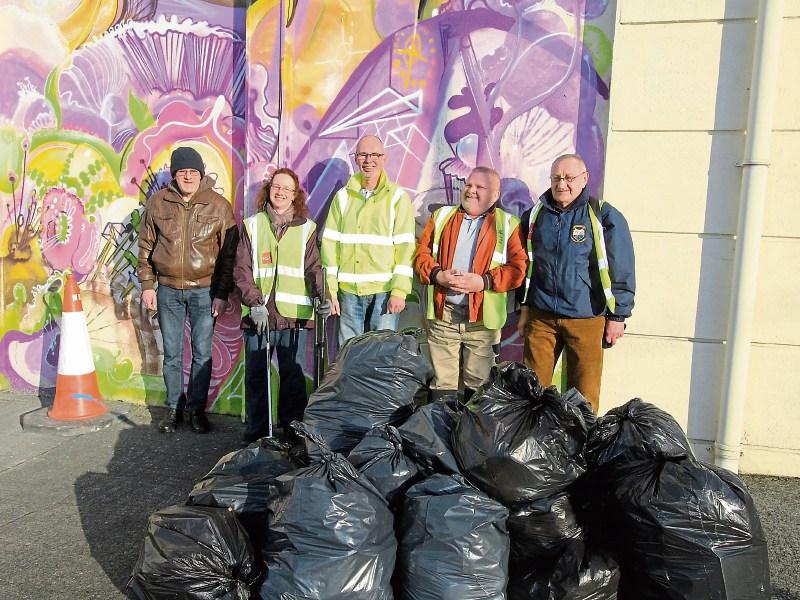 Tidy Towns volunteers were out in force over the Christmas season, after approximately forty bags of illegal rubbish were dumped around Longford town.

According to Longford Tidy Towns Vice Chairperson, Tommy Sherlock, sacks of rubbish were left near bottle banks at various locations.

“I was actually driving up the town on Christmas morning and when I was passing the bottle bank at the Market Square there were nine sacks of rubbish.”

Mr Sherlock then decided to check out some of the other bottle banks in the town, finding a further 26 bags of rubbish at three separate points.

“I know there's about six more out along the new bypass,” Mr Sherlock continued.  “We just seem to have bags everywhere, and that's besides what we pick up.”

The rubbish was  collected up on St Stephen's Day by Longford Tidy Towns, who then disposed of it correctly.

“On Tuesday morning (December 27) we had volunteers around town and we ended up with an extra sixteen or so bags,” Mr Sherlock revealed. “It's always been an ongoing issue, but it's never been this bad. It's constantly getting worse.”

Praising the Environmental Officer at Longford County Council, Mr Sherlock concluded by adding that a number of culprits had been found in respect of previous incidents.

“They did tell me in the middle of December that they had something like 24 cases waiting to go to court, from the space of four or five months.”

This will be good news to the Tidy Towns group, who suffered some disappointment yesterday (Tuesday) after Longford ranked 15th in the Irish Business Against Litter (IBAL) competition, compared to last year's first place win.

“It is a disappointing result for the volunteers and the endless hours they put in 24/7, looking after our streets day in, day out,” admitted Tidy Towns Chairperson, John Farrell. “Even on Christmas Day and St Stephen's Day they were picking up illegal litter.”

However, Mr Farrell was quick to praise Longford's 'overall positive' report, revealing that out of eleven areas surveyed, eight were deemed grade 'A' standard; two were grade 'B' and just one, Townparks Industrial Estate, was Grade C.

Referring in particular to the Townparks and Longford Industrial Estates, the latter of which received a grade ‘B’, Mr Farrell said that small sections of litter tended to bring down entire developments such as these, but that a huge amount of work had gone into cleaning the areas up over the past year.

Thanking all who have supported the Tidy Towns work in the past, and particularly the businesses who have come together to try and tackle the issue of litter in some of the worst-affected areas, Mr Farrell maintained a positive outlook, pointing out that the drop down the table did not necessarily equate to Longford’s standard slipping, but rather to other towns taking notice and putting in an effort to clean up the country.

Adding that Longford Tidy Towns will continue their invaluable work in 2017, Mr Farrell concluded by stressing the importance of co-operation in keeping Longford clean.

“If Longford wants to get back on top, the only way to do it is through co-operation and support.

“We’re depending on everybody to do their bit.”