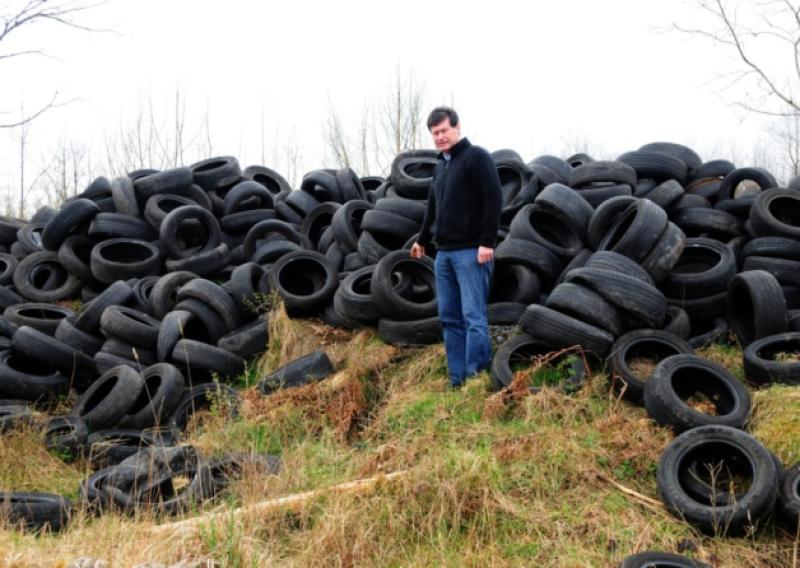 A large quantity of vehicle tyres was found dumped near the south County Longford town of Ballymahon last week.

A large quantity of vehicle tyres was found dumped near the south County Longford town of Ballymahon last week.

The incident occurred at the entrance to a recently-harvested Coillte forest at Derrynagolia.

“It looks like there’s around 250-to-300 tyres,” said local County Councillor Sean Farrell. “I’m flabbergasted. Someone tipped a lorry-load of tyres and just drove off - it’s outrageous.”

Cllr Farrell went on to say that the scale of the illegal dump has led him to believe the culprits are connected to the motor industry.

“Rogue tyre merchants and car scrappers would be the prime suspects,” he claimed. “It was a pre-meditated , determined effort to avoid paying the levy on the disposal of tyres.

He added that he had alerted the relevant County Council staff: “The Council are aware and I’ve been in contact with the Environmental Officer, Gary Brady. They’re dealing with these things on a regular basis.”

Describing the area where the tyres were discovered, Cllr Farrell said that, “It’s a scenic road; a cul-de-sac which leads down to Lough Ree.

“The local community had only recently cleaned-up road verges in the area.”

Explaining how the situation will be dealt with, the Newtowncashel-based councillor admitted that, “The County Council will have to pay the bill. Everytime something like this happens, funds end up having to be diverted from community projects, so it’s really the community who ends up paying.”