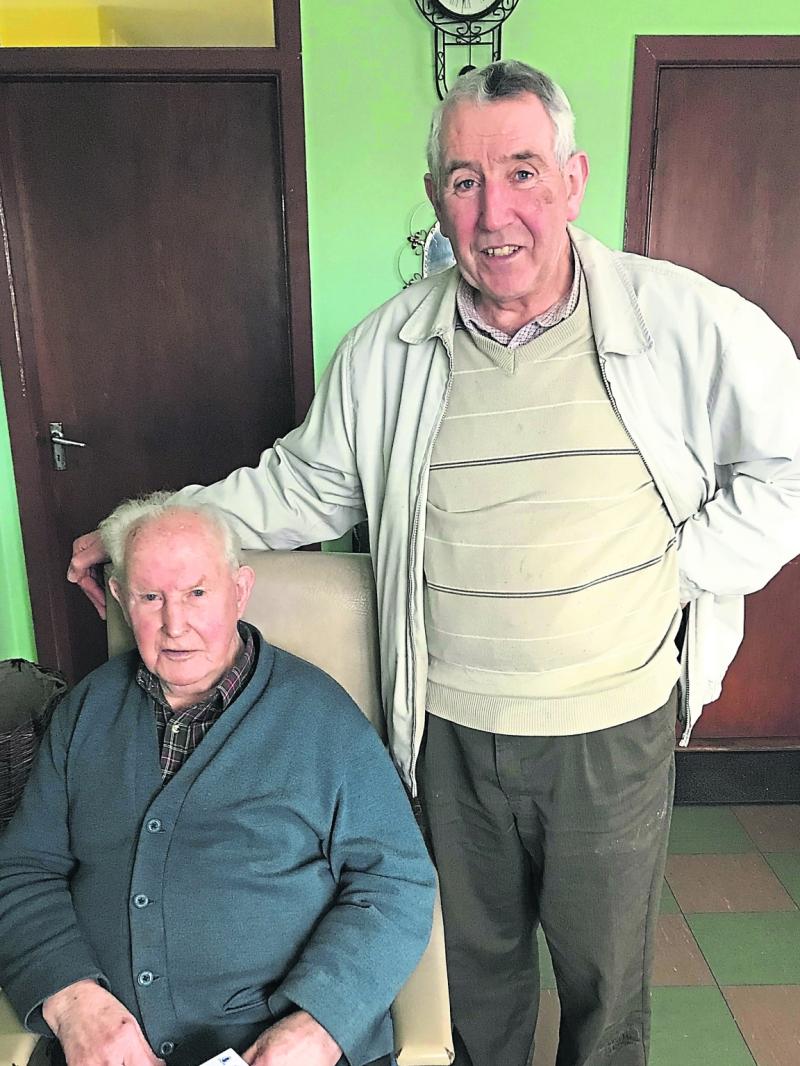 Willie Lyons (seated) who served on the committee which aimed to raise money to construct the mart and Michael McIntyre who at 48 years, is the longest serving mart employee

At the time it opened in March 1970, Carrigallen was the third largest mart in the country and one of the most technologically advanced of its kind.

But it was more than that to the many shareholders, committee members and farmers in the area - it marked a major turning point in the way that stock was bought and sold and an opportunity to ensure access to the finest animals and best prices possible.

In January 1969 a number of local farmers expressed the belief that a co-operative mart was the way forward. Fair Days were in decline and recognising that needs were changing, an approach was made to senior officers of Killeshandra Co-op for advice. Following this the Three Provinces Co-operative Mart Society was formed by subscribers to share in a capital drive organised by the Committee of the Society during 1969.

Writing in late 1970, Fr Patsy Young recalled: “Many people began to think in terms of a large central co-operative mart as the only ones likely to succeed. But there would be difficulties...such a venture would need massive support from a wide area. A central location would have to be decided upon and accepted throughout the region. Tentative plans for small units would have to be abandoned. The worthy ambitions of many local communities would have to be sacrificed for the common good of all.

“Co-operation on a grand scale would be called for; co-operation embracing people of town and country, different parishes, different counties, in fact different provinces. What a task!....A survey of stock population in the a target catchment area in West Cavan, North Longford and South Leitrim east of the Shannon revealed that the area held 150,000 cattle and 45,000 pigs...Geographic location coupled with consideration of stock distribution and service roads were the factors which determined the choice of a site about one mile west of Carrigallen.”

A campaign to collect £30,000 share capital was launched on April 30, 1969 and the response was astonishing. Within the first three months 900 farmers had invested more than £20,000 in the project and it was at this stage that the idea of association with a large group of co-op marts was first put forward.

John O’Neill, General Manager of Killeshandra Co-op noticed the acquisition by Golden Vale Mart (GVM) of private marts in Edgeworthstown and Tullamore and urged his fellow committee members to consider some arrangement with the southern marts group.

Following this the Three Provinces Committee behind the Carrigallen Mart project held a special meeting of 500 shareholders in St Patrick’s Hall Carrigallen on October 17, 1969 to consider the proposal to amalgamate with the large Golden Vale Co-op Mart Society.

By November 1969 the site for the mart, formerly the property of Charlie Sheridan, Calloughs, Carrigallen, had been cleared and preliminary development work was carried out with the assistance of volunteer workers. The contractor was PJ O’Connor and the mart was completed in record time for a final cost of £55,000, covering 39,000 sq ft.

The first sale was held on March 18, 1970 and President of the National Farmers Association, TJ Maher presided at the official opening. Following a blessing by Rev Pattsy Young and Rev. AE S Strong, the mart was opened for business under the guardianship of Michael Fitzsimons, the first Manager.