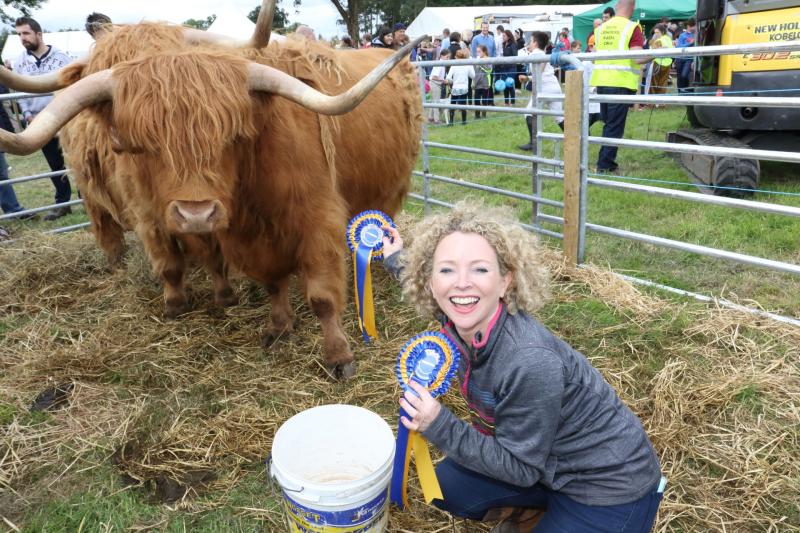 Michelle Shaughnessy is pictured with the lovely Hamish and Henry who will be a big attraction at this year's County Longford Show & Country Fair on Sunday, July 1. Photo Michelle Ghee

Ballinalee’s Hamish and Henry, the now famous Scottish Highland cattle in Co Longford are set to steal the show at this year’s County Longford Show & Country Fair which takes place on the lands of the Plunkett family at Lisnamuck, Longford on July 1.

The pair were also the centre of attention at the recently held Dunderry Fair in Co Meath where they clinched the champions of the show accolade, and at this stage, it is fair to say that with each passing year Hamish and Henry become more and more popular as they step out in style with their owner Michelle Shaughnessy at the annual summer shows.

Meanwhile, Hamish and Henry’s arrival in north Longford was thanks to two people says Michelle - her late father and well-known cattle dealer Mickey, and the owner of the cattle, a farmer in Co Galway.

“I first spotted them in the highlands of Scotland though,” Michelle added as she recalled her holiday to the area back in 2012.

“I was at Eilean Donan Castle with my friends and while they were looking at the castle, I was in the little shop looking at the cattle sections in the books; I saw these gorgeous highland calves and I actually asked the lady in the shop if they actually existed, and she said they did!”.

As Michelle said herself, she immediately summoned her two friends from the castle and the three spent the rest of the holiday travelling the high roads and byroads of Scotland looking for the cattle.

It was then that Michelle found Hamish and Henry.

And that was at Applecross in the West Scottish highlands.

It was September 2012, she recalled and the cattle were purchased by a Co Galway farmer shortly thereafter.

He then sold them onto the delighted Shaughnessys.

So, in December 2012 Hamish and Henry arrived into the yard of the family farm in Ballinalee.

“They took over from the moment they arrived on the farm,” laughed Michelle, before pointing to the fact that the whole family fell in love with them.

“Daddy let me keep the cattle and put them into his herd; he has left me a wonderful legacy to be honest and I am very grateful to him for that.”

Meanwhile, Hamish and Henry made their debut show appearance at the Granard Agricultural Show a couple of years back and since then they have been welcomed at numerous others across the country including Tullamore, Mullingar, Longford and Dunderry.

Hamish and Henry have also added to the family in recent times and the Shaughnessys have welcomed Hannah, Hilda, Howard and Honey to the brood.

“Highland cattle are so gentle, in fact I can barely get them to move at times,” smiled Michelle, before pointing out that when Hamish and Henry see her they immediately run to her!

“They are not commercial cattle either, so that means I can enjoy them and love them and know that I’m not going to lose them one day.

“When they are at the shows they are so placid; they let people pet them and look at them close up and it doesn’t bother them in the slightest.

“For me, they are here to stay; they are not going to be fattened or sold.”