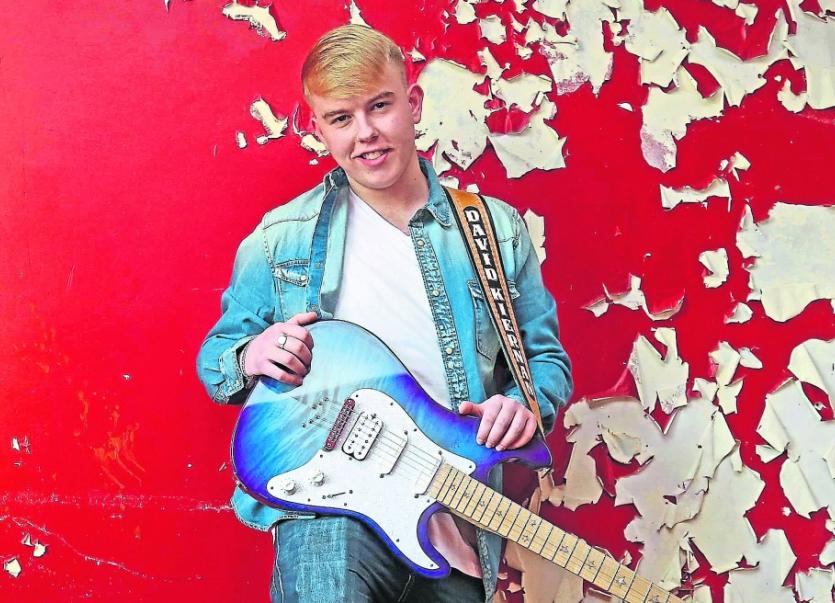 Mick Flavin has been a huge influence in David Kiernan's musical style.

At the young age of just nineteen, local country musician David Kiernan has already had a fulfilling and successful career, with so much potential stretched before him - especially following the release of his debut album 'For the Love of a Song', which launched earlier this year.

And the young Ballinamuck man is quick to express gratitude to all of his supporters and those who helped him along the way.

“I started performing when I was about 13 in Evolution Stage School here in Longford,” David told the Longford Leader recently.

“ I was at it for a few months and we did an annual show every year. And when the show was coming up, they asked me to do a lead part in it. So I was more than happy to do the lead part. It was Les Misérables.

“So we did that for seven or eight shows in the week and then after that, they brought me down to the Kinnegad classes and the Roscommon classes to do their shows as well, because male parts were hard to fill.”

Evolution Stage School gave David a great foundation in performance and entertainment and it was at the age of 16 that he really started pushing for a career on the stage.

“I always loved country music - it was always my favourite,” he recalled.

“I would have been listening to all the big names from a small age. I remember I spent a lot of time with my grandmother and my grandfather.

“Every evening I’d be in the car with my granny listening to Mick Flavin, Noel Cassidy, Robert Mizzell, Alan Jackson - all of them playing in the car.

“So I just came to love it and I always did love country music.”

In fact, he said, it was fellow Ballinamuck man, Mick Flavin, who really helped him to launch his country music career.

“He was the special guest at the Ballinamuck Fair Day that year and I asked him could I do something with him some time,” said David.

“I told him I was a singer. He knew my grandfather, so I explained who I was. So he took my number and I thought he’d never ring me.”

Just a few days later, though, David got a call that would change his life forever.

“He said ‘I’m doing this show, a sit-down concert in the Backstage Theatre in Longford in November. Will you do it, myself and Noel Cassidy are doing it, and the band.’ So I said yeah that’d be great, thanks very much. He never even heard me sing.”

Things started to take off from there, with an interview on the Frank Kilbride show, alongside the likes of Seán Rooney and Brendan Grace - “I was just kind of star struck,” said David - in preparation for the big show.

“About two weeks before I was doing the Backstage with Mick, that interview went on air. That was the first time Mick heard me sing. He was impressed and he said he looked forward to the night.”

The night in question was November 14, 2016, and the show was completely sold out - this was a big deal for a young teenager from Ballinamuck.

“Mick Flavin was talking about me on stage. I couldn't believe it. I was just starstruck,” said David.

“And then, because I got such a great reaction, I said I'd do it under my own name in the pubs and try and work my way up.”

By December of that year, David had purchased all of the equipment he needed to kick off his career as a country musician and, a month later, he performed his first solo gig in Eamon Farrell's pub.

“I actually found out that day I was doing the gig. I hadn’t planned on doing a gig until Christmas. My grandfather rang me when I came home from school and said ‘you’re playing Eamonn Farrell’s’, so I said ‘oh great’ but I was thinking ‘oh s***’.

“So that night, I got in and got set up and got a good enough sound out of the system and we had a good night for my first night - they were all out dancing.”

After that, David never looked back: “I never got a break from it,” he said.

“The first year I was taking gigs on a monthly basis. The following year, I was doing the dates for the year. And I started taking dates for next year three weeks ago.”

The next big moment in David's career came when he recorded and released a sing called 'Travellin' to Flavin'.

“I released that towards the end of 2016 and it went down really well and that became the song everyone knew me by at the time,” he said.

In 2017, the Ballinamuck man decided to record the rest of his album, 'For the Love of a Song', which features ten tracks and was launched in the Breffni Arms Hotel, Arva last April, with music by all the great local country musicians.

David has been travelling around the country to perform with the likes of Mick Flavin, Robert Mizzell and other big names in the Irish country music scene that he listened to growing up.

“It is a dream come true. It’s kind of normality now where I just say ‘oh I’m playing with Flavin tonight’ or ‘I’m playing with Mizzell tonight’. If somebody asks me, it just comes out and it’s just so normal,” he said.

The plan going forward it “to keep playing music and keep playing gigs”, and David is currently putting his album out there as much as he can, through various radio stations.

“I had never really done social dances before, so I’ve done one or two now. It’s not just weekends, it’s Monday to Monday, so you can get work any day of the week but you have to travel.”

It's been an incredible journey for David so far and, following his album launch, the only way is up, as he fully immerses himself in Ireland's country music scene.

“Music is kind of it for me. Music is my life. If I’m not playing it, I’m practicing it,” he said.

David's album 'For the Love of a Song' is available to purchase now.