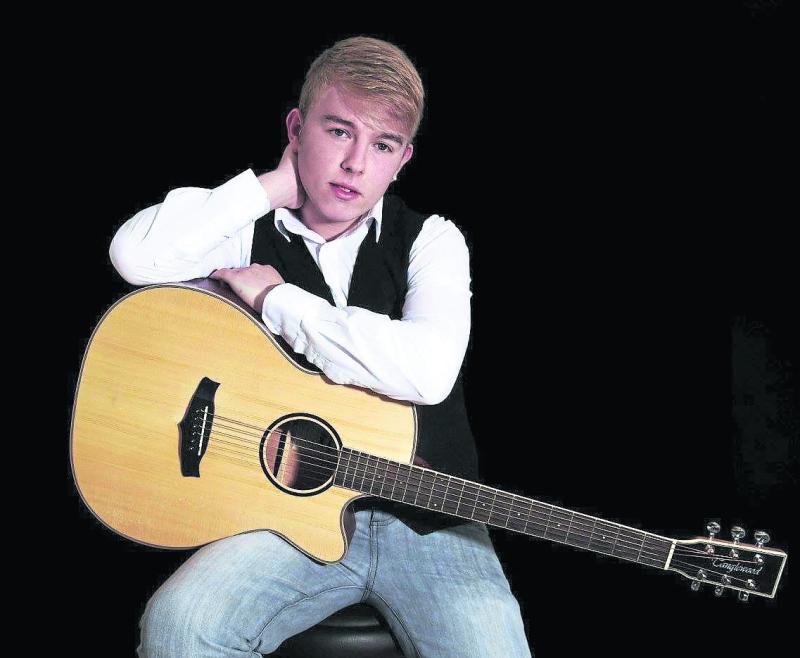 Ballinamuck musician David Kiernan has all the credentials to go a long way in the music industry.

Like most aspiring singers, David Kiernan, from Ballinamuck, started singing in school and doing the odd concert appearance.

When he was thirteen he joined Evolution Stage School in Longford, a respected organisation, where he learned some useful things about the music business. Most important he learned to sing properly, where he has fond memories, and speaks highly of the school.

He recounted that while in Evolution he sang lead roles in les Miserables, Grease, and others.

While in Evolution he was attending secondary school, in Moyne, and did his Leaving Cert there.

Maybe not the most ardent follower of books, he still passed the leaving and all the while he was yearning for music, music, music.

Four generations is a long time, although there’s nothing wrong with studying the singing of vocalists from that era, which produced some of the very best.

Singing in those days didn’t have the convenience of a tuning machine. The first basic rule was that the artist had to deliver.
Nowadays, it’s something of a lottery, with more tuning machines than could build a city!

Merle Haggard, George Jones, Willie Nelson, Dean Martin, Frank Sinatra, Gordon Lightfoot.......any of these can be noted for their unerring ability to inject something special, and slightly mysterious, into a song.

None had the advantage of a tuning machine!

Eloquent, tuneful, individual, great interpreters, were adjectives that could be applied to all those named, without a doubt.

David has learned his lessons well, and brings the same disciplines to his singing. He’s very tuneful, good phrasing, very accurate in every note, and although he’s still in the infancy of any sort of career, I’d have a hunch that good things await.

Meanwhile, his singing is mature beyond his years.

Two or three generations is a long gap behind the seasoned campaigners. Yet David is smart enough not to be carried away, and keeps his feet on the ground.

His singing is mature beyond his years.

I believe that as time passes, perhaps his vocal, and indeed his taste may change, but for now he’s unapologetically country.

Nothing wrong with that.

Not that David Kiernan is raw, not at all, in fact his vocal is well developed and he’s a good singer.

In terms of purity and integrity he’s amazingly good.

Well produced, good shape, and really good singing. We sincerely wish him the very best for the future. The Album will be launched on April 23rd in Arva.