Longford's Peter Clarke 'had a quiet, private way of getting things done'

When I first arrived in Longford in 1971, to take up the position as Production Manager at The Longford Leader, the then Managing Director, Eileen Farrell, provided me with a pen picture of each individual member of the 36 strong staff at the newspaper, something I kept to this day.

In the caseroom, where typesetting in those days, used the traditional hot metal process, there were two categories of staff.

Linotype machine operators who produced the lines of type forming the body of a story, and compositors who turned those lines into pages, adding headings and photos in the process, all by hand and a skill that took seven long years of an apprenticeship to achieve.

Young Peter Clarke was a qualified compositor, having served his time at The Leader and in Mrs Farrell's note about 'young Clarke', she advised me that he was “good at his job, but had other interests outside the Leader which seemed at times more important to him than his daytime job”.

“He has a pub in Dublin Street and he is also involved in local politics and is a Fine Gael man.”

How right she was about the latter and how wrong she was about the job as Peter was a very dedicated member of The Longford Leader staff, took his job seriously, never left before the paper had 'gone to bed' and even treasured a few pints at the end of a long week, were put on hold until the first copies of the paper rolled off the Cossar press.

Peter had a wicked sense of humour, and never lost it. He loved his time in the FCA, along with all his local pals, his weekend training in Longford and of course, his annual visit up to Finner Camp for two weeks with the FCA each year. He also enjoyed a flutter on the gee gees, he had soccer in his blood, as his uncle was honoured with an Irish cap when he played for Ireland, which to this day is proudly displayed in his Dublin Street premises, along with the green jersey worn on the day.

In my collection of published photos, going back to that day, I discovered one that had never been published before. The Leader were sponsoring a trophy for the Miss Slasher's Carnival title, and with his wicked sense of humour, Peter insisted that he be presented with the award. In the photo in the Leader caseroom are Tom Chapman, Joe Farrell, the late Harry Farrell, the late Jimmy Doogue, Martin Malone, and sadly, the late Peter Clarke.

A few years later, and then a director of The Longford Leader, I left and joined Albert Reynolds to develop The Longford News at the former Breaden's Bakery premises on Dublin Street, across the road from Peter's pub, when Vincent Gill retired and sold the paper.

A few years later, Peter decided to work full time in his pub, and also left The Leader and his career as a compositor.

Clarke's pub is affectionately known to this day and remembered by former Longford News staff as 'The Branch Office'. Some household names in journalism, Liam Collins, Willie Farrell, John Donlon, Paul Williams, Alan O'Keeffe, Anne Sweeney and Eugene Masterson, to name but a few, served their time at the Branch Office in Dublin Street.

Stories were discussed, analysed, created and dropped, over a few pints in Peter's and a bowl of his mother's all-day soup. Paddy Drumm behind the bar was like a priest in the confessional, what's said in Peter's, remains in Peter's. 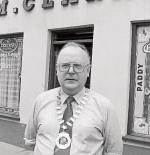 Longford has "lost a giant" of a man in former councillor and publican Peter Clarke as tributes poured in today following the much admired and well respected Longfordian's passing.

Everything was going to plan at The News, but due to more demands in production for the expanding paper, we needed a compositor. They were a rare commodity in those days, and after some 'serious' negotiations with Peter which weren't entirely that serious, he agreed to help out the situation by returning to working in a newspaper caseroom at The News, for the three busiest days each week, on a temporary basis.

That so called temporary basis turned out to be years, and as The News progressed, so also did the numbers of staff from 'across the road' using the facilities of The Branch Office. We entertained visitors to the paper in Peter's pub. From Maeve Binchy to Sean Doherty, and 'The Doc' enjoyed the banter with Peter as they criss-crossed party lines over a few pints.

Every time I visited New York with Willie Farrell, to attend the Longford Association functions and Dinner Dances, which always took place the week before St Patrick's Day, I brought back all the drink company pub decorations John Mahon could find for me to decorate the Branch Office for March 17 and Peter loved them.

We also brought back a giant sized tie with the words 'Vote' in big blue and red letters, and shortly after, the then Fianna Fáil Minister for Justice Sean Doherty came over to Peter's for a chat and a pint and I persuaded them both to stand together, holding their drinks, with the tie wrapped around them. It was all great fun on the night, but the next day, I had a phone call from Sean and a whisper in the ear from Peter: “Don't use that photo in the paper, the party wouldn't be too happy with it.”

I promised half serious and half in jest, “that as long as they both lived, that photo would never see the light of day”.

I kept my word and this is the very first time the world will see that photo of Peter and Sean, as now sadly both men are no longer with us.

Many of Peter's fellow politicians will have their own kind of meaningful things to say about their former colleague, and well deserved they are, but I had many reasons over the years, to call on Peter's generosity and humanity to help out people in times of need, and I was never disappointed. He had a quiet, private way of getting things done. He never asked how they voted or what party they supported. If they were from Longford, that was good enough for him.

Peter was a kind man, with a good heart, and above all, a great Longford man. I also recall, when sadly a member of the Longford News production staff died, and we were very short handed that week. Peter offered to 'come over' and help out by working a few days. When I brought his wages over to him that Friday, he refused them and asked me to give them anonymously to the man's family.

That was some man-that was Peter Clarke.

Sadly, another Longford personality has left us, but thankfully the stories of his kindness in the service of his community, will never be forgotten, least of all by me. On Saturday July 10 2021, the Good Lord, with love and compassion, took Peter by the hand and brought him home.