A past winner of the Irish Business Against Litter (IBAL) league, Longford will be disappointed to have suffered a slight slip in performance in the latest litter rankings which places the town at 28th.

The latest litter survey by business group IBAL shows Roscommon reclaiming the Cleaner than European Norms status it lost last year, in 8th position in the ranking of 40 towns and cities nationwide. Athlone is also in the top ten, placed second behind Kilkenny.

Longford, meanwhile, has slipped to 28th and is deemed Clean. In the January league table, Longford was 11th, so it has fallen 17 places in the rankings.

The survey also revealed that Ireland’s principal tourist towns and cities are cleaner than ever as the peak season for visitors approaches. Kilkenny topped the rankings, with Ballymun in Dublin City a litter blackspot at the foot of the table.

The An Taisce report for Longford stated:

“A slight slip in performance in Longford, a past winner of the IBAL league. The majority of the sites surveyed were either top ranking or moderately littered, with one seriously littered site - a derelict site on Chapel Lane. This wasn’t just casually littered but subject to long-term abuse and neglect.

"St Mel’s Cathedral and St Mel’s Road Car Park were both top ranking – they weren’t just good with regard to litter but also presented very well.  The residential area of Annaly Park just missed getting the top litter grade due to litter along the back lane.”

IBAL's Conor Horgan explained, "Today’s tourists demand high levels of cleanliness and these results indicate that’s what they will be getting this year when they come to Ireland."

Mr Horgan added, "It is also important that their first impression be a good one, so it’s pleasing to see the roads around Dublin Airport are again to Clean to European norms.”

The IBAL spokesperson concluded, “We have a perception of dumping as something that takes place outside of our cities and towns, far from public view. The survey shows this is not the case.” 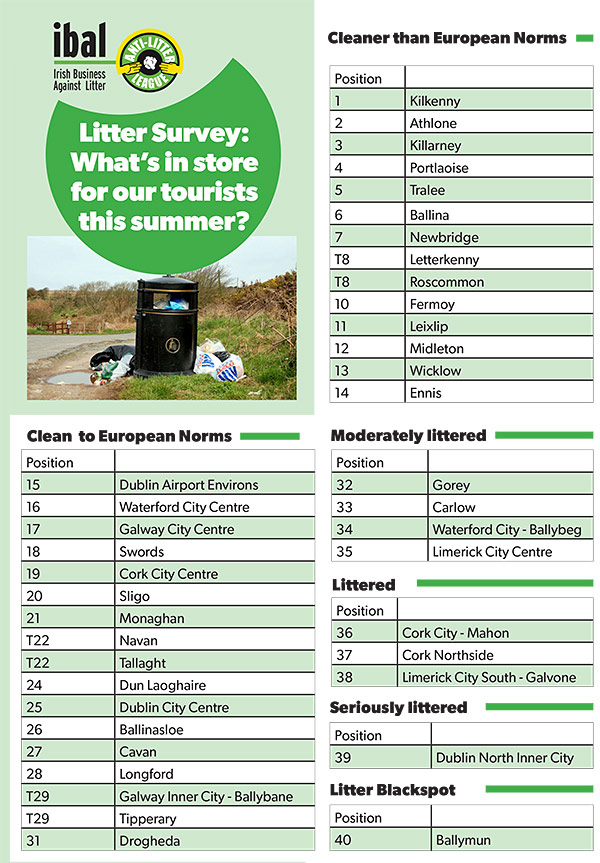