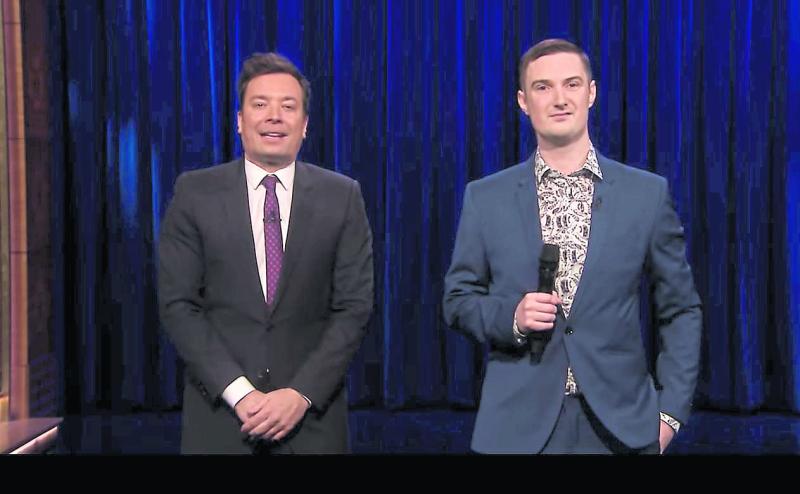 Killoe comedian Sean Finnerty had audiences around the world laughing at his Irish humour after he appeared on the internationally popular Tonight Show With Jimmy Fallon last Friday night.

The hilarious local man nabbed the slot on the popular TV show after he auditioned for a nationwide comedy competition called Stand Up NBC.

“The audition went great and the booker for The Tonight Show asked me to perform on an audition showcase. That also went well and a couple of months later I got the news that I'd be performing on the show,” said Sean who was thrilled.

“Excited would be an understatement. So would anxious! I will say, most of my anxiety was worked out during sets in the build up to the show by running the set over and over. On the day I was feeling a little more relaxed.”

He certainly got a good reaction from the audience at the taping of the show, as well as those watching around the globe.

“Absolutely nothing could prepare me for the adrenaline rush walking out on camera and taping my first late night appearance so, considering, it went relatively smoothly. I can't complain,” he told the Leader.

“(Jimmy Fallon is) the nicest guy you could hope to meet! He was in a rush to get the show running because he had to catch a flight right afterwards to a benefit in Puerto Rico but still made time to chat to me in my dressing room for a few minutes before taping. Also the introduction he gave me was incredibly flattering.”

ALSO READ: Battle to commence for the title of Longford’s All Time Great

Next up for Sean is two weeks of rest in Florida (where he'll still be gigging) before heading to LA in February.

“I shouldn't have any trouble getting an agent if that's what I want but honestly, I'm just planning on booking some gigs and starting to make a decent living doing what I love,” he said.

Sean also had a hugely successful gig in Longford town just before Christmas, which he said was hugely enjoyable.

“I was blown away by the support of the locals. We had to leave the sliding door to the room open because it was so packed. They were a fun crowd too. At one point I cracked a joke about what an honor it was to perform for a room full of my parents' friends because a lot of their friends were actually in attendance. Although it must be said there was a solid turnout from the 30 and under age bracket too,” he said.