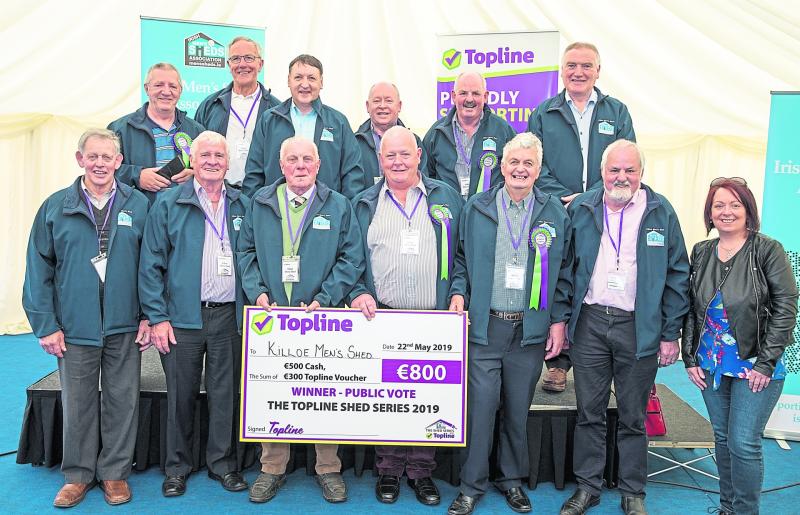 The fourth annual Shed Series, the biggest Men’s Sheds crafts exhibition in the world, took place at Naas Racecourse on Wednesday May 22.

The Topline Shed Series saw Men’s Sheds from throughout Ireland compete for a top prize, awarded to the winning entry by a panel of judges headed by nine-time Irish Champion jockey Pat Smullen. Killoe Men’s Shed based in Carrigan, Co Longford, for the second year running scoop the People’s Choice Award , their piece, “History of Killoe” featured hand carved models of different historic landmarks which are all situated in the parish of Killoe including a brief history of each landmark and the history of their local Topline Providers in Longford town.

Kilbeggan Men’s Shed from County Westmeath scooped first place in the final, and Smullen was hugely impressed by the standard of competition, “I’ve known about and supported men’s sheds for years, but I never realised the standard of skills and craftsmanship was so high. I’m just stunned by what I’ve seen today, and I’m delighted Topline and the Irish Men’s Sheds Association have given these lads such a great day out, because they deserve it”.

The Shed Series, run jointly by Topline and the Irish Men’s Sheds Association, attracted almost 150 submissions from all corners of the island. These were whittled down to the 23 sheds which took part in the final. Entrants were invited to reflect upon the heritage and history of their community and their local Topline store’s place within it.

This year’s theme attracted a broad range of innovative, humorous and artistic entries, which gave the judges some tough decisions. Pat Smullen was assisted in his judging endeavors by John Phelan of Topline Phelans and Mairead Lavery, Newstalk.
All prizes were supplied by Topline as part of its ongoing partnership with Irish Men’s Sheds.

The partnership, launched in 2018, has seen sheds benefit massively from Topline’s support for their local community projects.