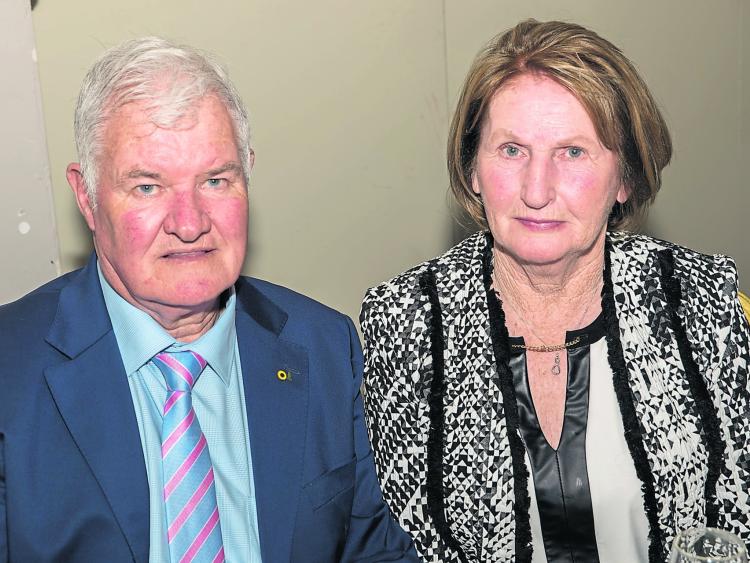 As already referred to, association chairperson, Tony Gilleran (inset), paid generous tribute in his speech to the current committee, and former committees down the years.

Although he won’t be too happy about this, I would like to pay Tony a well-earned tribute here, on behalf of myself and my committee colleagues, for his huge contribution to the organisation since joining and was elected to the chair. Each year he has designed, edited and produced the dinner dance booklet as well as involving himself in the details of organising the annual event, leaving nothing to chance.

His approach was always professional in every way and his chairing of meetings was impeccably fair and agreeable. Tony’s kind of positive leadership is often hard to find. The ‘beautiful piece’ referred to by John Keegan was a bog oak sculpture, created and fashioned by Brendan Collum in his studio in Barraghmore, Drumlish.

Entitled ‘Going for Goal’ it was specially commissioned for the occasion and depicted goalposts, netting, a goalie, and a forward powering towards goal, skillfully carved into the bog oak by Brendan. Finally, it was heartwarming to receive a nice, goodwill message on the morning of our final event from Gerry McEvoy in Zurich.

Gerry is a former secretary of the association and would have wished to be with us for the occasion. However, family responsibilities determined otherwise – Gerry and his wife Stacey are now parents to a 10 month old daughter.

We extend our congratulations to Stacey and Gerry and wish them and their daughter a great future.