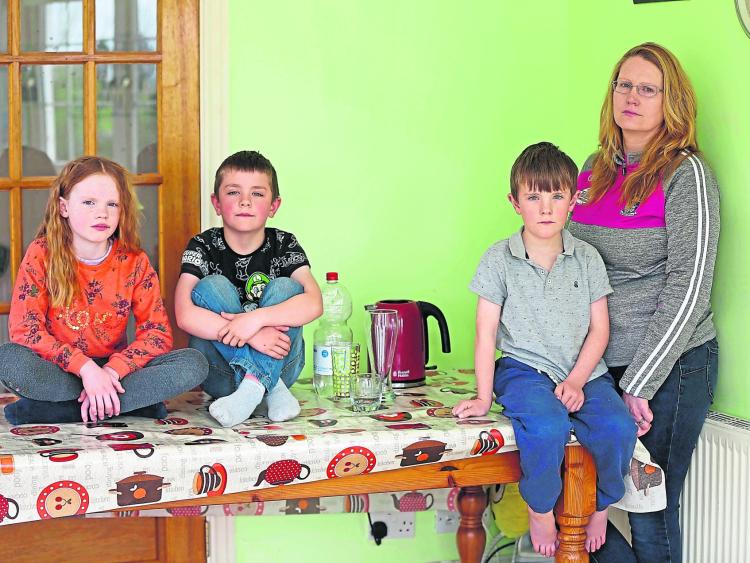 Ella, Conor, James and Deirdre O'Brien from Legan are just some of over 8,000 people affected by the water issues in south Longford PICTURE: Shelley Corcoran

A boil water notice for Ballymahon and the surrounding areas has been a huge inconvenience for approximately 8,247 people in south Longford this past week, with no end in sight.

And, with temperatures soaring to 22 degrees celsius over the Easter weekend, the demand for water and ice was at its highest across the county.

Legan woman, Deirdre O’Brien, is one of those who has been severely affected by the lack of readily available, safe drinking water and said that her household really felt the demand.

Read also: Irish Water do not know when south Longford boil water notice will be lifted

And, she added, the main issue for her and many of her neighbours and elderly relatives was the lack of timely information, as many without internet access did not hear the news until it filtered down through radio broadcasts and word of mouth.

“We were drinking it a few days without knowing there was a problem,” she said.

“Elderly people around here didn’t have a clue and they were furious that it was online first. They felt isolated.”

The boil water notice was issued last Wednesday, April 17, and remains in place until further notice, with Irish Water giving no indication yet as to when the notice will be lifted.

“The BWN remains in place and testing of the water continued over the weekend and is ongoing,” an Irish Water spokesperson told the Longford Leader yesterday (Tuesday) morning.

“The notice was put in place due to the failure of an alarm to alert us to the fact that there was an increased level of turbidity in the water.

“Turbidity is basically an increased level of cloudiness and could indicate issues with water quality and, as such, the BWN was put on as a precautionary measure.

Read also: Boil water notice in place for Ballymahon, Edgeworthstown and much of south Longford

“The issue with the alarm has now been fixed and, as outlined, testing is ongoing and Irish Water continues to work closely with the HSE and Longford County Council to lift the BWN at the earliest possible opportunity.

“We hope to be able to provide a further update on the BWN in the coming days,” the spokesperson concluded. But the boil water notice is still in place until further notice.

This news, however, offers little comfort to the 8,247 people who are still having to boil and cool their water on a daily basis.

And, with the children off school for the Easter holidays, combined with hot, sunny weather, the need for water increased massively for households with kids.

“It’s been very hot weather and they were on a bouncy castle so they were extra thirsty. It’s cost us money and it’s been more time-consuming.”

Deirdre’s main concerns are for the health of her children, Ella, Conor and James, as she struggles to keep them hydrated and safe.

Not far from Ms O'Brien's home just outside Legan village, local farmer, Charlie Keogh said he wasn't surprised there were issues with the water supply.

“All the water round here is coming through asbestos piping. They tell you that it’s no harm unless it’s cut or broken. But when there’s joiners going on here, you have to drill a hole down into that. Where is that going? That’s my point, but nobody wants to listen to that,” he said.

Mr Keogh has his own well and provides his household plus a herd of 70 cattle with water from it every day.

But he was quick to express his concerns for those affected by the boil water notice last week.

“Is it going to cause health hazards ten, fifteen, twenty years down the line?

“Irish Water is putting pressure on everyone to pay for water, but if water isn’t right, why should you pay for it?” he questioned.

Meanwhile, in the village of Legan, Mick Doherty said he wasn't too badly affected by the issue.

“It didn’t affect me at all. I bought water from the shop. I drink tap water, but I didn’t drink it because we got the word not to drink it,” he explained.

“It was no big deal, you know? It makes you appreciate water all the more, doesn’t it?”

For now, the boil water notice is still in place, with Irish Water advising all of south Longford to continue boiling water for drinking, preparing drinks made with water, preparation of food such as salad, brushing of teeth and making of ice.

It is hoped that an update will be issued in the coming days. See www.water.ie for the latest updates or keep up to date via the Longford Leader website at www.longfordleader.ie.