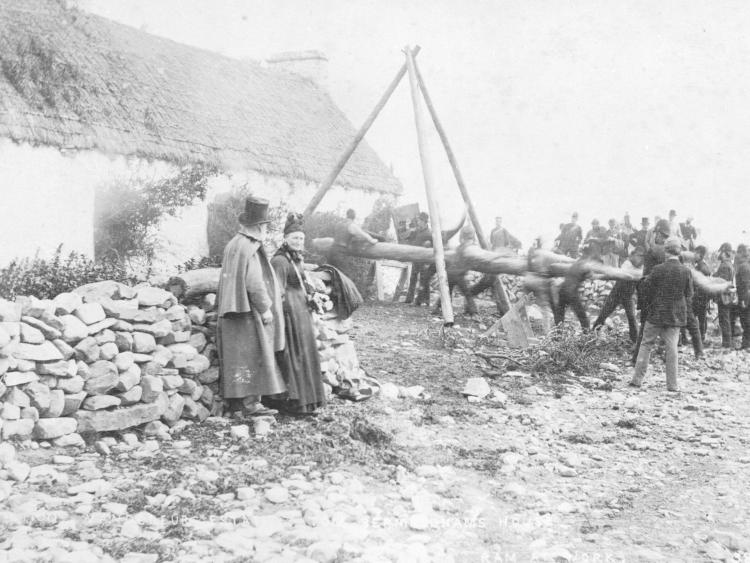 ‘The Hunger’ – the story of the Irish Famine - is a co-production of UCC, RTÉ, and ARTE, the European Culture Channel. Directed by Ruán Magan and produced by Tyrone Productions and Create One, it is narrated by Liam Neeson.

The Atlas of the Great Irish Famine, on which the documentary is based was published by Cork University Press (CUP), and its 728 pages and over 1,000 images offers a new and extraordinary insight in a defining period in Irish history.

Much acclaimed, The Atlas of the Great Irish Famine was awarded the Best Irish Book of the Year for 2012, proving to be one of CUP’s most popular books ever, with over 22,000 copies sold to date.

“Like the Atlas on which it is based, ‘The Hunger’ documentary is an important contribution by UCC to the public understanding of an extremely complex period in Irish history and one which forms an important element in Irish identity, and I am sure that it will further deepen public awareness of the issues that it so ably articulates” commented John FitzGerald, UCC’s Director of Information Services & University Librarian and Executive Producer of the documentary.

A crisis that impacted beyond our shores

‘The Hunger’ explores the Famine’s international origins and development in Europe, Britain, and Ireland and charts its long-term legacy as it plays out for much of the century that follows. Today, the Irish Famine is recognised as the worst humanitarian disaster of the 19th century, but what is less recognised is that the crisis impacted far beyond Ireland’s shores. The story of the Blight pathogen that killed the potato crop starts in the Andes of South America and then reaches into the heart of northern Europe, where the collapse of potato crops causes the deaths of 100,000 people, adding further fuel to social tensions that lead to Europe’s year of revolutions in 1848.

'The Hunger' follows on from the highly successful UCC/RTÉ documentary ‘The Irish Revolution’ broadcast in 2019. “Through raising public interest in important topics, UCC seeks to make learning both accessible and engaging. ‘The Hunger’ is a further successful instance of UCC’s public engagement strategy whereby our scholars and experts can contribute to public thought and discourse through publication, film, and news media” commented Professor John O’Halloran, Interim President of UCC.

In conjunction with the premiere of ‘The Hunger’ a new major website on the Great Irish Famine is also being launched. The Great Famine project brings together some of the foremost scholars on the Famine from across the world and drawing on more recent research, it aims to present fresh perspectives and insights into an event that had such a profound influence on shaping the lives of millions of people both in Ireland and beyond.

“The Great Famine project provides a unique portal in which schools, colleges, and Irish communities across the globe can engage with the history of the period in an accessible and engaging manner. It is a hugely significant educational resource and builds on UCC’s sustained commitment to public scholarship on the Great Famine” commented Dr John Crowley of UCC.

This project is the product of a partnership between RTÉ History, the Department of Tourism, Culture, Arts, Gaeltacht, Sport and Media, and the Atlas of the Great Irish Famine edited by John Crowley, William J. Smyth, and Mike Murphy.