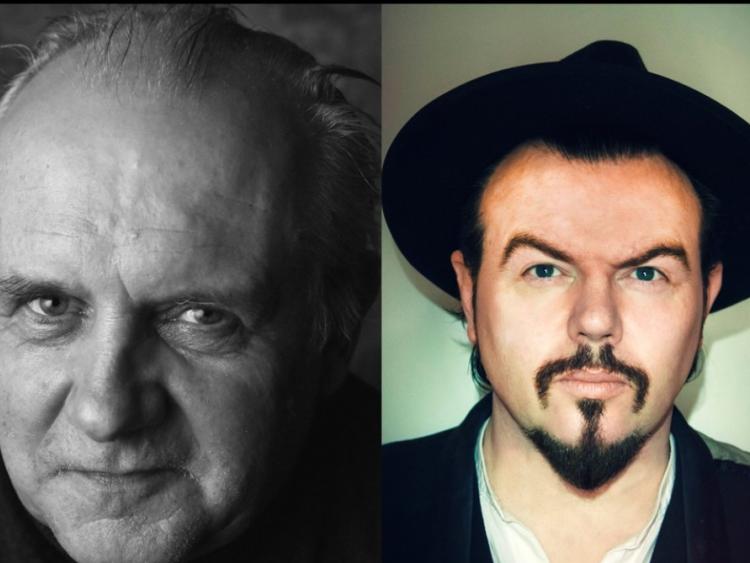 Pat McCabe and Jack L will join local actors on the stage this weekend.

Jack Lukeman and Pat McCabe join forces for an unmissable performance in Backstage Theatre this weekend.

They will be joined on stage by two local actors, Shane Crossan from Longford and Carol Ann Farrelly from Leitrim who will be reading alongside Pat.

The Lukeman/McCabe collaboration might best be described as old-style village hall vaudeville for the future.

If one could conceive of a cottage fire being raked late at night as a scratchy phonograph playing Joyce and Count John McCormack begins its revolutions somewhere afar in the regions of hyperspace, as the door is knocked and a lady selling scones with human eyes arrives in the rain, then perhaps they might find themselves coming close.

Shane Crossan has been active for many years in the arts life of Longford and Dublin, most recently making a welcome return to the stage in Furthur Theatre’s production of Tilsonburg.

Carol Ann Farrelly from Aughavas, Co Leitrim has studied and worked in the Arts scene both here in Ireland and abroad.

Once, in an analysis of the songs of Bob Dylan, Greil Marcus the Rolling Stones journalist spoke of the ‘old weird America’.
This is the old weird, indomitable Celtic heart-Ulysses meets The Dandy and Oor Wullie. Or, if you like, The Carter Family on the moon.

Lukeman and Mc Cabe are friends and long-time collaborators, having toured the UK, the USA and Ireland in the nineties. Now they are back with a wailing harmonica. High Lonesome comes to Backstage Theatre this Saturday, February 23, at 8pm. Tickets at €22 are available on 043 33 47888 or www.backstage.ie.