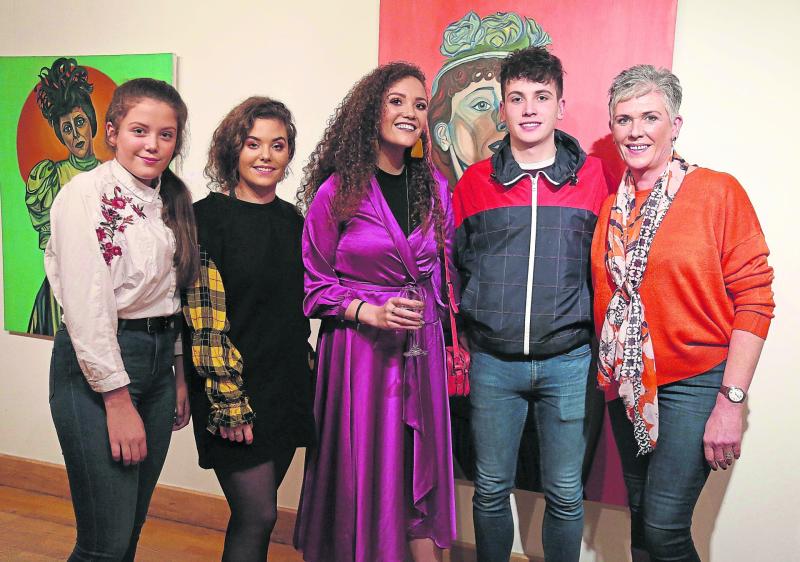 Alanna, Julie, Allison, Jason and Deirdre Moorhead all out to celebrate the opening of Allison's exhibition.

It seemed that half of Ballymahon came out to support local artist, Allison Moorhead last Wednesday as she officially opened her stunning exhibition, 'Archive' in the Backstage Theatre.

The exhibition will be in the Atrium Gallery until December 10 and features a collection of striking portraits, inspired by old photographs that Allison has collected over the years.

“I paint with expression. Each brush stroke or mark made in my paintings, whether it be pronounced, expressive, delicate or limp holds significance to me.

“I visually project how I feel towards each individual character in the paintings, giving them all their own significance and sense of drama.

“I use geometrical shapes and bold forms to create my newly envisioned characters.”

The works in the 'Archive' exhibition have been developed from Allison's own archive of images, from old family photos, so images that attracted her attention in various antique shops as she travelled through America.

“You can see they’re not Irish people. They have different features. And they’re not from this era. A lot of them are from a different era and that’s what drew me to them,” Allison told the Leader last week.

“This allowed me to envision the characters of the images reigniting their memory and making them my own personal archive.”

The paintings are made of bold expression, a diverse colour palette and unique forms, with the pose of the figures portrayed being a keen concern for Allison.

“The perception of the pose has the ability to convey visual meaning in the form of body language and facial expression,” she said.

“This is a core element on which I built a narrative in my work. The figures hold a sublime quality to them with some portraying a saintly quality when shapes are added behind them.

“This in turn added drama to my large-scale paintings. Each one carrying their own significance and personalities.”

Allison deals with “very traditionally renounced imagery” - a metaphoric snapshot of an ordinary photo that she has appropriated to give her own stamp.

“My unique colour palette and structural form have allowed me to change the image from mere tradition to modern,” she said.

“The reading of Susan Sontag ‘On Photography’ has unlocked my mind to different issues regarding capturing photographs and the essence a photograph holds.”

'Archive' will run in the Backstage Theatre until December 10.