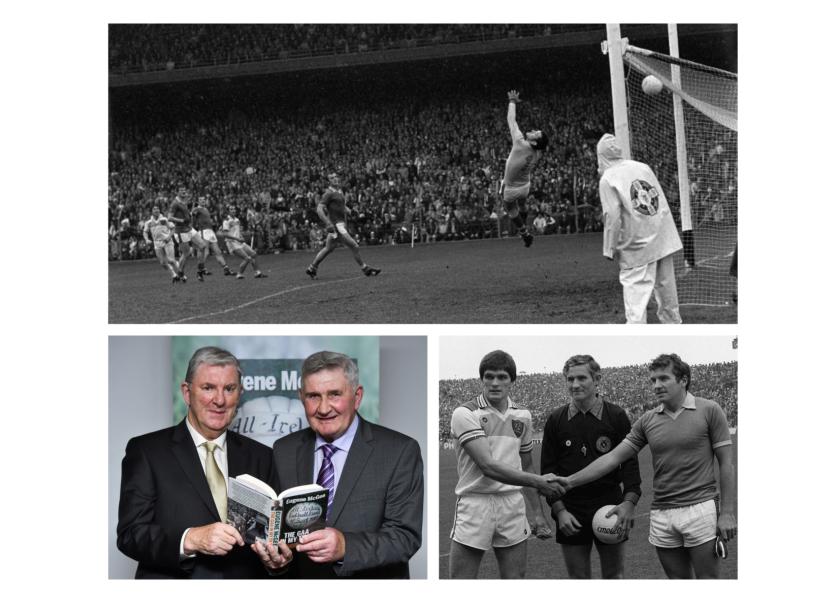 RTÉ documentary '1982: Prayers of the Faithful' to tell story of how Eugene McGee's Offaly rocked The Kingdom

RTÉ has announced a brand new documentary charting Offaly's march to the 1982 All-Ireland title as part of their new season schedule.

Entitled, '1982: Prayers of the Faithful,' the documentary will tell "the story of the most unfancied team to ever win an All-Ireland football title as Offaly beat a Kerry team considered to be the greatest in GAA history."

Seamus Darby's goal in that 1982 final is still spoken of as the most famous moment in GAA history, while the lesser discussed penalty save by Tullamore's Martin Furlong is also sure to crop up as that Faithful day is recalled on screen.

Elsewhere on the sporting front, RTÉ Sport will continue to bring Irish audiences the big games, big moments and big stories in Irish sport beginning with the All Ireland Finals in Hurling, Football and Camogie. On All-Ireland Hurling Final day, The Dressing Room on Sunday Sport will air on RTÉ Player and RTÉ News Now with Jacqui Hurley and Darren Frehill joined by a panel for a very different type of discussion around this year’s match.

Other Ground-breaking films and documentaries this season also include, 'Katie,' directed by Ross Whitaker and following champion boxer Katie Taylor as she attempts to rebuild her career after a year of turmoil threatened to derail it.

Ireland’s Greatest Sportsperson will see the search for Ireland’s greatest sportsperson from the 1960s to the 2000s with Des Cahill while Evanne Ní Chuilinn and Darragh Maloney will once again celebrate the heroes of Irish sport at The RTÉ Sport Awards.

RTÉ is serving the Irish audience’s desire to see their stories on the screen with home-produced drama and innovative partnerships on productions with an Irish connection. Home productions include Taken Down, a new series that see a detective investigate the violent death of a young Nigerian immigrant found abandoned close to a Direct Provision Centre.

Comedy will also be high on the bill with Amy Huberman's new show, Finding Job, hitting the screen in the coming months. It sees Amy Huberman starring as Joy, a woman who finds herself thrust into the limelight as she tries to get over a break-up. It will also star Aisling Bea, Laura Whitmore and Jennifer Rainsford.

Podge and Rodge will also returns as Ballydung Manor is flinging open its doors again for celebrity roasting and scorching music acts. New co-host Doireann Garrihy joins the lads this year and may not know quite what she’s letting herself in for.

Elsewhere, viewers saw their bromance blossom on the recent series of Dancing with the Stars and now Marty Morrissey and Bernard O’Shea are taking to the road in a new show with the working title, Marty and Bernard’s Road Trip.

Younger RTÉ2 viewers can look forward to a new series of Bernard Dunne’s Mythical Heroes and new series Mini Moguls, currently in production, and Drop Dead Weird has been commissioned for a second series. A full line-up of programming for RTÉJr will be revealed later this year.

A number of high-profile documentaries and factual programmes will also take to the screen. They include:

Orla Tinsley – Documentary following Irish campaigner and journalist Orla Tinsley as she awaits a life saving double lung transplant in the US.

Philly McMahon – The Hardest Hit – Drawing from personal experience the Dublin footballer explores the underbelly of illicit drug use in Ireland and makes the case for decriminalisation in Ireland.

Whistleblower – Following publication of the report of the Disclosures Tribunal, Katie Hannon will present an in-depth documentary on the events leading up to the establishment of this unprecedented public inquiry and the inside story of the Tribunal itself.

Vogue – Vogue Williams is back with three new shows exploring the life of Instagrammers, trial by social media and whether monogamy has a future.

Dearbhail McDonald: Fertility Shock – Exploring how Irish people are leaving it later to have babies and how fewer children combined with an ageing population is a demographic time-bomb.

Stephen Byrne - Leaving Again (Working Title) – Broadcaster Stephen Byrne destroyed his Leaving Cert results before finding out how he did. Now he’s doing the unthinkable and sitting the exam all over again.

Brendan Grace – Funny Man – Revealing portrait celebrating the life and career of one of Ireland’s most popular and enduring comedians.

Growing Old Live (Working Title) – Ireland’s top researchers and scientists reveal the mysteries of the human life span from 0 to 100, live in front of a studio audience over three nights.

Viewers will also be getting an insight into how the other half lives. Drogheda actress Yasmine Akram test drives some of the most lavish Air BnBs on the planet in Billionaire BnBs and Dermot Bannon visits some of the world’s most jaw dropping homes from London to Australia in Dermot Bannon’s Homes. The hugely successful Ireland’s Rich List, presented by Joe O’Shea, returns for a new series.

On the flip side, financial planning series How to Be Good With Money sees Eoin McGee help households, some struggling, others less so, to get a grip on their finances. And Brendan Courtney returns with a second series of This Crowded House, following 12 Irish families as their adult children try to fly the coop during a property crisis.

Dr Eva Orsmond returns with Dr Eva’s Great Escape, a searingly honest documentary series following the obesity expert and her family as they leave the rat race behind to set up a brand new weight loss clinic in Portugal. And Baz Ashmawy helps dreams come true in his own inimitable style on brand new three-part series Wingman.

The Irish Revolution - a three-part landmark documentary bringing a fresh perspective on a period that changed Ireland forever. Narrated by Cillian Murphy.

Life Before Independence - presented by Catriona Crowe, documents what everyday life was like for the ordinary citizens living during that extraordinary period in our history.

Keepers of the Flame – Emmy winner Nuala O’Connor tells the story of generations dealing with the consequences of war and civil war.

In a special event, Election 1918 presented by David McCullough, re-enacts how Ireland’s only 32-county election and its momentous results would have been covered by modern television. Ar Son na Poblachta continues its illuminating look back at Irish history, by examining little-known stories from the War of Independence.

This season will see the unveiling of a brand new look for RTÉ News as its studio under goes a major refurbishment and technical upgrade.

Broadcasting over 1,000 news bulletins each year, this will be the first refurbishment of the studio in ten years, with the brand new look being launched on-air in early 2019.

This autumn also sees the return of Prime Time and Claire Byrne Live with more live studio debate, more revelations uncovered by RTÉ Investigates and The Big Picture looks set to shine a light on another key societal issue across RTÉ platforms.

As the country looks ahead to a likely presidential election and referendums, the Budget, and the marking the centenary of the end of the first World War, RTÉ News & Current Affairs will deliver unrivalled comprehensive coverage. Early 2019 will also see programming marking the centenary the first Dáil and the outbreak of the War of Independence.