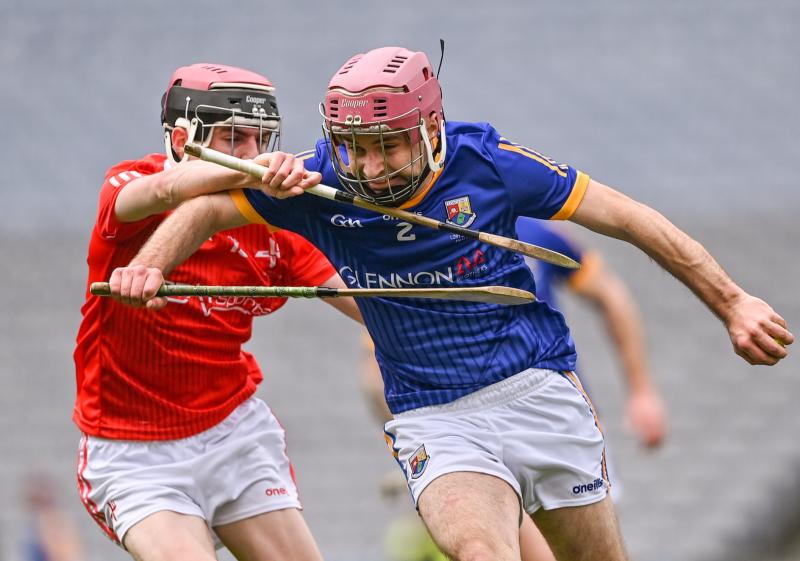 Longford, minus the services of injured team captain Johnny Casey, enjoyed a dream start, racing 1-2 to nil in front, but that unfortunately, was as good as things got, and from there to the shrill of the final whistle it was Louth that dictated terms and they emerged as convincingly and fully deserving 3-27 to 3-14 winners.

It was Louth’s third time to savour success, having previously got their hands on the silverware in 2016 and 2020.

Having leaked 1-2 during that disastrous opening, Louth recovered admirably and were 2-5 to 1-2 in front after 25 minutes and they never looked in any trouble of relinquishing their stranglehold. It was 2-9 to 1-7 in Louth’s favour at half-time and although Longford tried hard to keep pace with their opponents during the second half, their gutsy effort simply wasn’t enough.

After losing to Fermanagh in the National League Division 3B Final earlier this year, Longford will be bitterly disappointed to have come up short in another final.

Interestingly, Louth lost to Longford by a single point in the group stage of the Lory Meagher Cup a few weeks ago, so it was some turnaround from them and they had star performers all over the pitch but particularly prominent were Darren Geoghegan, Paul Matthews, Feidhleim Joyce, Seaghan Conneely, Liam Molloy and Sean Crosbie.

The new principal of St Mel's College has been announced as long serving head teacher Declan Rowley prepares to step down after almost a decade at the helm.

Adrian Moran’s Longford charges, seeking a first Lory Meagher Cup triumph since 2014, hit the ground running and racked up with 1-2 without reply during an explosive start.

The vastly experienced Joe O’Brien rounded his marker and slammed the sliotar to the net in the third minute, with vice captain Cathal Mullane and Reuben Murray, from reigning county hurling champions Longford Slashers, quickly following up with points into the Canal End. This gave Longford a 1-2 to nil cushion with just six minutes gone on the clock.

Louth were stung into action by their slow start and between the 7th and 25th minutes the ‘Wee County’ racked up 2-5 without response. Midfielder Liam Molloy got them off the mark with a 7th minute point and Seaghan Conneely grabbed a goal five minutes later after decent build up play involving Molloy and Paul Matthews. Darren Geoghegan slotted over the equaliser and he edged Louth ahead for the first time with a 15th minute converted free, 1-2 to 1-3. Matthews after a piece of fine individual skill and captain Feidhleim Joyce added points for Louth before Matthews fired in Louth’s second goal, 2-5 to 1-2 after 25 minutes.

Longford were in desperate need of scores and up to the plate stepped Paddy Lynam. He landed three super points (one from a ‘65) and Cian Kavanagh, from a huge distance, also bisected the uprights. This purple patch propelled Longford right back into contention, 1-6 to 2-5 after 30 minutes.

Louth refused to panic and they steadied the ship as Geoghegan (free), Conneely and Joyce registered points in quick succession, 2-8 to 1-6. The sides traded points before the interval - Paddy Lynam converted a Longford free and Sean Crosbie pointed for Louth - so at the break, having led early on by five points, Longford found themselves five adrift, 2-9 to 1-7. 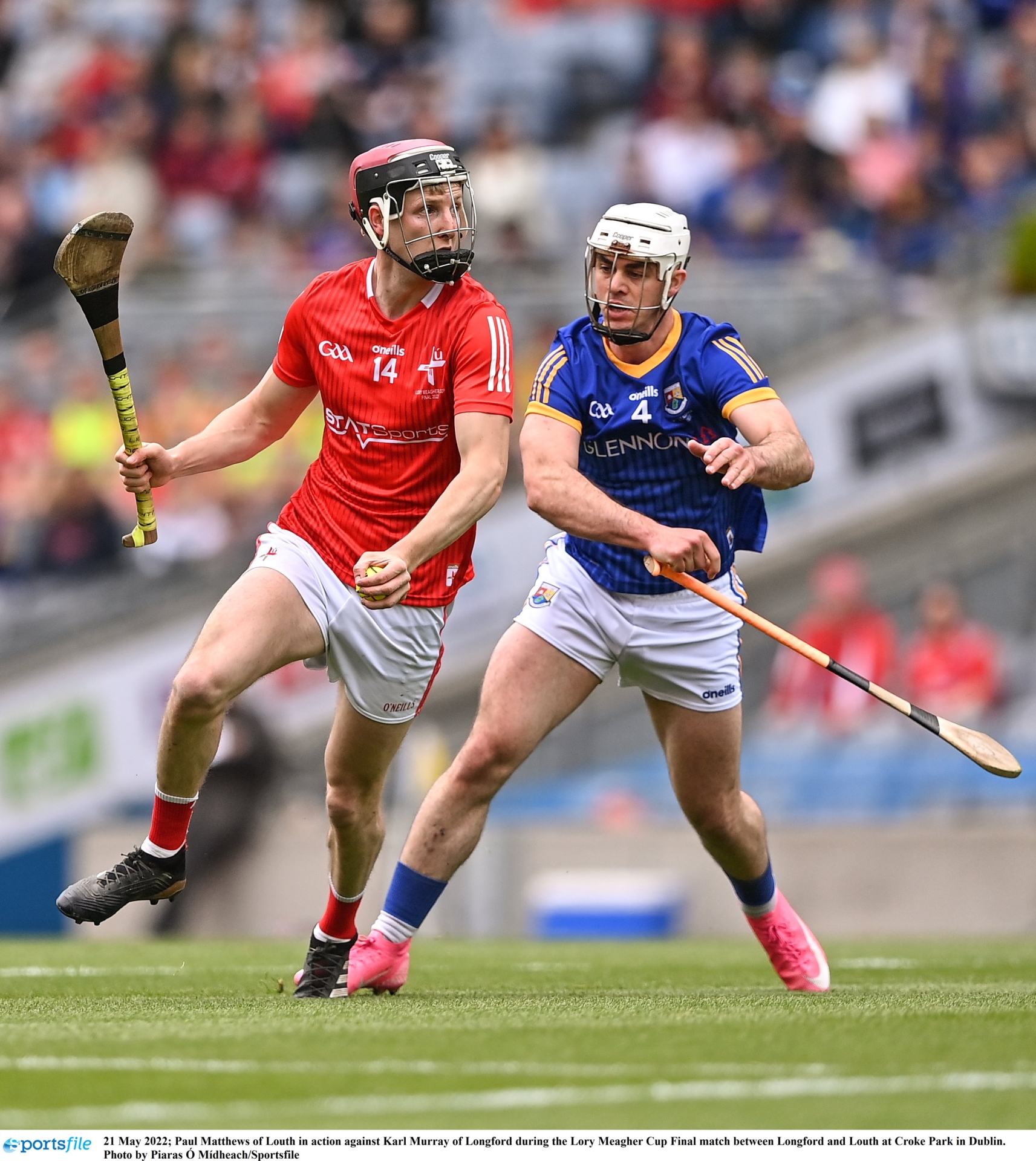 On the resumption, Louth refused to allow Longford back into contention and with 47 minutes elapsed, six points separated the teams, 1-11 to 2-14. Darren Geoghegan (4, 3 frees) and Feidhleim Joyce contributed the Louth points with Longford replying through Joe O’Brien, Emmet Corrigan and Lynam (2 frees).

From the 48th to 54th minutes, superior Louth reeled off an unanswered 1-4, putting them 13 points ahead, 3-18 to 1-11. Paul Matthews netted his second goal, with Joyce (2), Molloy and Sean Kerrisk dispatching the points.

Battling Longford pulled a 57th minute goal back through Reuben Murray but Louth replied immediately with points from Joyce and Molloy. Joe O’Brien (free) and Emmet Corrigan raised white flags for Longford, 2-13 to 3-20 after 63 minutes.

Louth hit six points on-the-trot through subs Niall Keenan (2) and Mark Gahan, Molloy, Geoghegan (free) and another of their subs Padraig Fallon, 3-26 to 2-13. In injury time Longford full back Enda Naughton netted a goal and Reuben Murray a point but fittingly the final say went to Louth marksman Darren Geoghegan, 3-14 to 3-27. 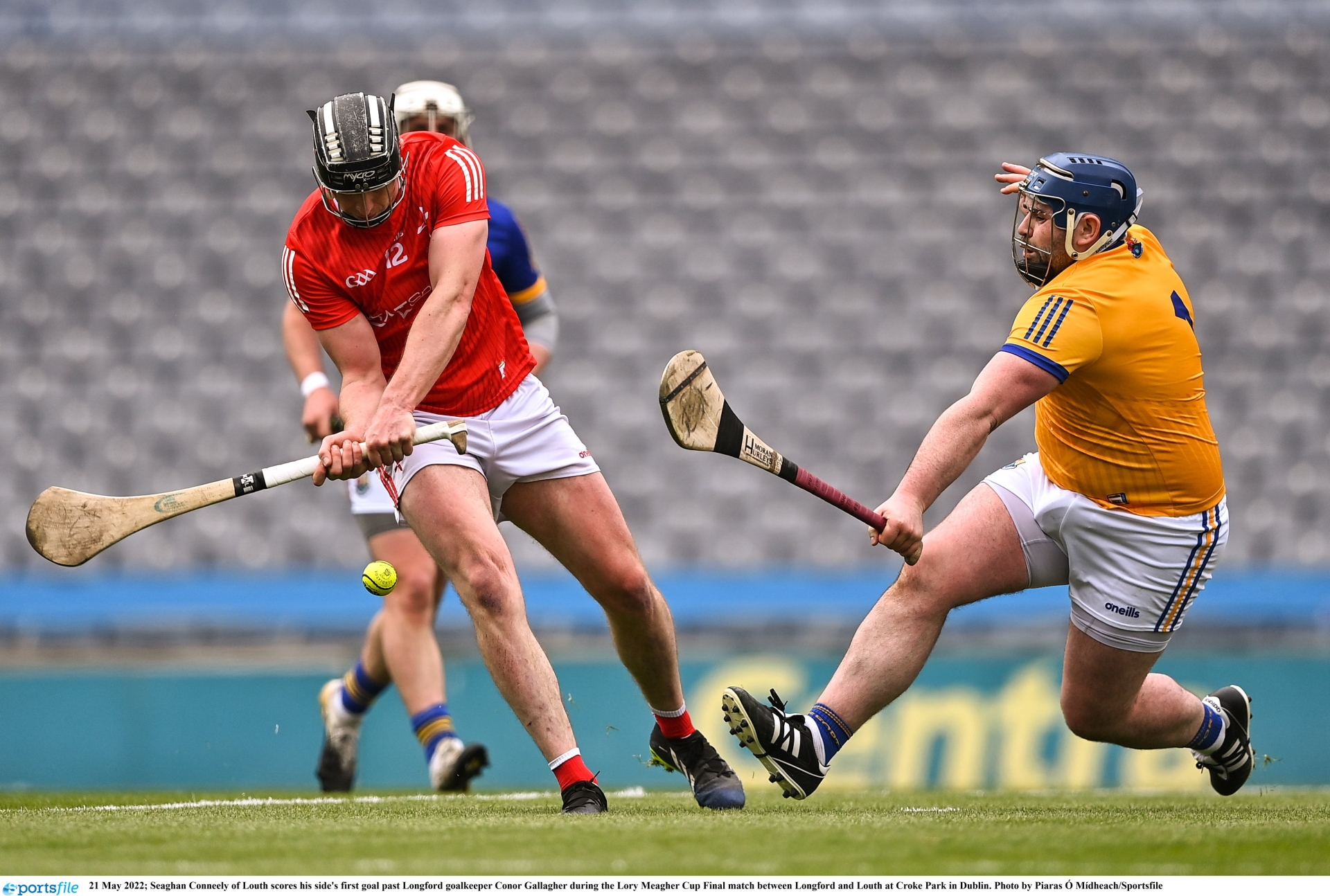