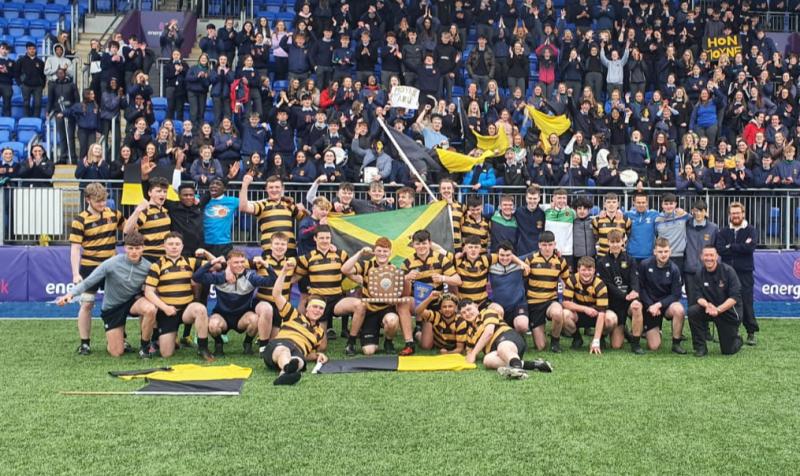 The first half was a tight affair with the breakthrough finally coming after a searing break by scrum half Barry Donnelly. Moyne led at the interval by that solitary score.

Into the second half and Moyne again breached the Bagenalstown rearguard through another outstanding break from the mercurial Arva man, Barry Donnelly. With fly half, Colmcille’s Sean Smyth converting, Moyne led 12-0.

The Carlow side refused to lie down and after constant pressure, they opted for a three point penalty to leave the game finely poised at 12-3.

Moyne were looking dangerous, however, every time they got into the opposition half.  After another well worked attack, Moyne touched down again through devastating outside centre, Drumlish man, Auley Thomas.

At 17-3, Moyne looked like they had done enough, but Bagenalstown rallied again and scored a try of their own.
Fortunately for Moyne, the conversion came back off the post to leave the game at 17-8. Moyne was not to be denied on this occasion, however, and after another brilliant turnover, Sean Smyth booted the ball into the stand and the final whistle sounded.

Cue hysterical scenes of unbridled joy, as Moyne supporters invaded the pitch to celebrate with their team.

A massive congratulations to the Moyne men on their Leinster success. Incredibly, Eoin Murtagh, Drumlish, has now captained a junior and senior Moyne team to Leinster rugby titles. Quite an achievement.

The senior panel have given themselves and those who were in attendance, memories to last a lifetime.