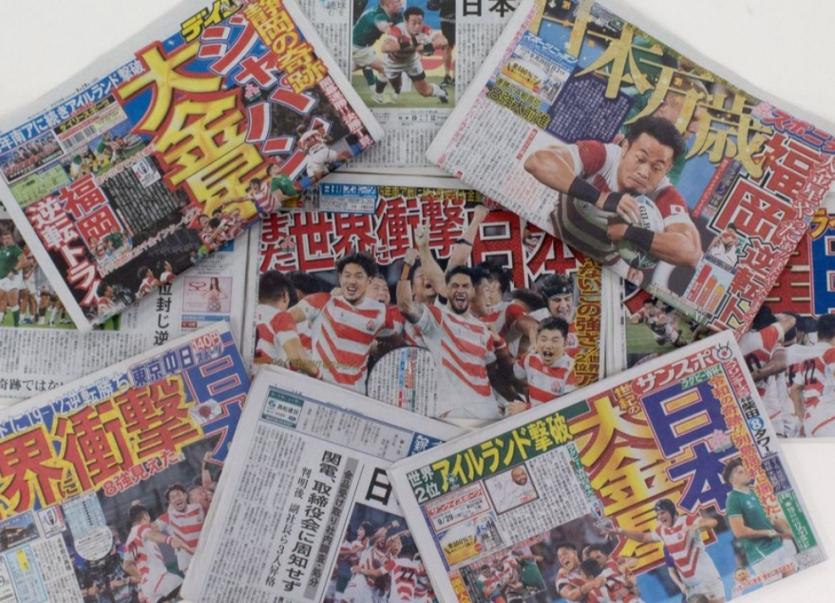 Sunday morning hangovers are a common occurrence all over the world.

And there will have been a few people feeling decidedly sick in the Ireland camp when they awoke in Shizuoka following their stunning defeat by Japan on Saturday.

It was a result that shocked the world, with some of rugby's biggest names expressing their surprise and issuing congratulations to the Japan team via social media.

The reaction to the game in Europe and Asia could hardly have been more different, but how did the newspapers in Japan and Ireland describe the events?

Unsurprisingly, the papers in Japan were adorned with pictures of celebrating Japanese players, although their headlines are somewhat understated when compared to those usually accompanying such sporting successes in Europe and the UK.

They included lines like 'Japan beat Ireland. It's not a miracle any more', and 'It's above a miracle. Now we can see the quarter-finals'.

That is about as excitable as it gets, with the Asahi Shimbun newspaper taking an even more controlled view of events with their headline 'Japan beat Ireland. The players are competing very well'.

In contrast, the media in Ireland were rather more damning of Joe Schmidt's side.

"What excuses can there be for this fiasco? September 28, 2019 is another date that will live in infamy," wrote columnist Eamonn Sweeney in the Sunday Independent.

He added: "Chickens which had been circling the coop for a while came home to roost like a flock of vultures descending on the carcass of Irish hope.

"Irish hopes of exiting Japan without further disgrace now rest with the Scots, so readily mocked a week ago. Should they beat the hosts we might yet progress to a quarter-final against South Africa and for a week delude ourselves that our hopes are not in complete tatters."

In the same paper, former Ireland captain Mick Galwey was in rueful mood, writing: "History tells us that it all seems too much for Irish rugby to get it right at a World Cup. We just can’t seem to crack it. And Shizuoka was just another sorry day in our RWC history."

The Mail on Sunday described Ireland as a 'rabble caught in the headlines', claiming they looked like 'victims of a high-speed bullet train wreck' and 'utterly rudderless'.

Another former Ireland international, Shane Horgan, who worked with coach Schmidt in his Leinster days, wrote in The Sunday Times: "Schmidt is going to have some very difficult conversations with big-name players who are not performing to the levels expected.

"That creates stress and tension which ripples throughout the squad. The Irishman in me is angered by this lame defeat but the rugby fan in me is delighted. To show progress, rugby needs a minnow to upset a Tier 1 nation at each tournament."

In the same paper, Irish rugby correspondent Peter O’Reilly praised the Japan performance but said: "Ireland played into their hands", while chief sports writer David Walsh said: "This was simply a compelling test match won by the better team."

Expanding on his theme, Walsh wrote: "Far from the Shizuoka Stadium, shock waves will have reverberated through the rugby world. Close up, it didn’t seem such a shock.

"Long after the game ended there were rows of Japanese rugby writers tapping away on their laptops in the media centre. They looked like they never wanted to go home.

"Eventually a lady from the organising committee came and said the centre had to shut for the night. They filed out dutifully and on the road to nearby Aino train station, they found benches and walls and pieces of grass and re-started their machines.

"Now their fingers were dancing in the dark, writing a story they will one day tell to their grandchildren."

The Sunday Mirror was equally damning, with their headline of 'Land of the rising stun' summing up the feelings of the nation.

In The Sunday Telegraph, Ben Coles ranked the game second in a list of all-time Rugby World Cup shocks behind only the Brighton Miracle from 2015, when the Brave Blossoms sensationally beat South Africa.

Writing in Irish online platform The42.ie, Murray Kinsella sought to bring some perspective and evoked the memory of bad defeats to previous teams.

"Ireland have a weak track record at World Cups and this slots into the category of disastrous results on the global stage, though many would argue it wasn’t as bad as Lens in 1999 (when they lost a quarter-final play-off to Argentina) or the 2007 tournament," he wrote.