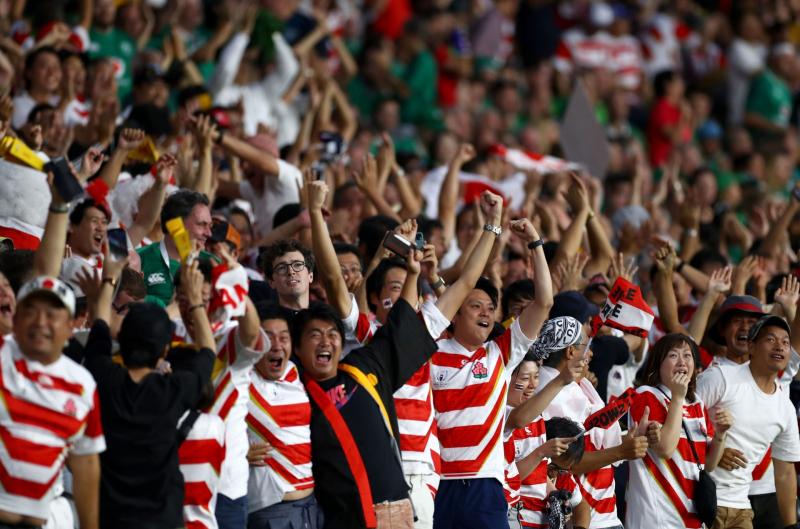 The Ireland rugby camp has been reacting today to their seismic defeat to hosts Japan at the Rugby World Cup.

Head coach Joe Schmidt said: "I'd like to first of all congratulate the Japanese team for the energy, the intensity, the skill they brought to the game tonight. They are a big team, they played big and they were very difficult to contain.

"I felt we probably controlled the first quarter reasonably well, to go 12-3 up with two tries scored.

"It's probably exactly what we'd asked for but the longer the game went the more oxygen they got from penalties and from the skill that they showed and you've got to commend them for that. It’s not the first time we've seen them do it. It's not a surprise to us that they were incredibly tough to beat.

"The quality even of Michael Leitch coming off the bench – I thought he really added value. (Fly-half) Yu Tamura and (the centre, Timothy) Lafaele, I thought they got a bit of an armchair ride. We got penalised for a few offsides and then we became hesitant. Once we became hesitant we couldn't really put the same pressure on them as they were putting on us – and they got a real roll-on.

"The strength of the team will be how they respond and rebound from this. A six-day turnaround was a little bit tough and we've got a five-day turnaround now into the Russian game in Kobe on Thursday. So that will be another challenge for us."

On the injuries sustained by Ireland players during the game and in training this week, Joe added:

"Rob Kearney has got a decent shiner (black eye) but he's feeling OK now. He failed his HIA (head injury assessment) as far as I know.  If he doesn't pass his HIA2 and HIA3 he will be a confirmed concussion and that will rule him out of the Russian game.

"Unfortunately Jack Conan has a fracture in his foot and he will return home to Ireland tomorrow."

On the team offloading seven times in the game and whether this was the match to play an open game, the New Zealander said:

"Unfortunately that reversed as soon as they got hold of the ball. We missed a couple of marks.

"I think we got two lineouts in the second half. We didn't get too many platforms to play from and they kept the ball for very long periods."

On the final play, with Japan leading by seven points close to the Ireland line - and whether he was happy with Ireland's decision to get the ball off the pitch to ensure a bonus point, he continued:

"Potentially the bonus point could be very important. It means that we've got six points from our pool from two games so far, Japan have got nine and Samoa five.

"You've got to finish in the top two so keeping that bonus point allowed us to stay ahead of Samoa in the short term. We know that Scotland will be a player and Russia will line us up in five days' time.

"Those tight turnarounds are pretty tough-going. We will have to chase a little bit now because we want to stay in with a chance of topping the pool. Certainly we've got to get in the top two."

On if he would have made more changes to the team after the Scotland game, with the benefit of hindsight:

"It's hard to say. Players like CJ (Stander) and James Ryan were still delivering at the end. We tried to have a very easy start of the week. Our only real full training was on Thursday so those players felt really well recovered.

"Hindsight is always an advantage but I'm not sure we would have done it too differently."

He also commented on whether Japan's performance surpassed his expectations:

"No. I don't think the Japanese performance exceeded my expectation - unfortunately. We expected them to be as good as they were. We knew they were going to be incredibly tough – and so it proved. They have a very good engine room, with their tight-five forwards. Their back row were very effective.

"Across the board we found them a real handful. Obviously (Kotaro) Matsushima was a danger, (Lomano) Lemeki was a handful and ended up starting, so across the board they have got quality players. They play a quality style of game, they're very hard to contain. They tend to clean the ruck very, very deep and it allows them to get on to the front foot. That is very, very hard to stop.

On the nine penalties conceded by Ireland, he said:

"We'll go back and have a look at it. I certainly understand the frustrations of some of the players. It's not too dissimilar from the last time we had this referee (Angus Gardner, AUS). We'll make our comments to the referee body rather than make any public comment."

On the biggest disappointment of the game and what he hopes to see next:

"To have scored two tries in the first quarter and not to add to that is incredibly, incredibly disappointing. We've got to be better at what we're doing and we've got to demonstrate that in five days' time.

"We're not getting a lot of time to put anything together. We're doing an open session in Kobe on Tuesday and that will be the only training we'll have in the lead-up to Russia, who have already proved themselves to be very, very physical, very combative and aggressive. They stayed in the game for a long time against the Japanese.

"We're anticipating a very tough game in five days' time. We're going to have to dust ourselves off and certainly perform better than we did tonight."

On kicking to the corner in the second half and not taking the option to kick at goal, he said.

"It's something that we've done for a number of years now. If the penalty is within a certain area that we've talked about before the game, that means we go for posts.

"But at the same time if it's in an area that we feel there's doubt over the kick, we go to the corner. It was the same last week.

"That is the way we play. We back ourselves to go after teams.

"Once they went four points ahead it probably forced our hand a little bit and we had to go to the corner."

"They weren't giving an inch in any area of the game. They were scrambling really hard for each other and I thought we did as well at times. With the intercept at the end for Keith Earls (IRE) to get back and make that tackle (on Kenki Fukuoka) shows how much it means to us so the motivation and effort is there, we just have to look back and fix up a couple of things to try and win in five days' time."

On the difference in Japan's game from the two tests with Ireland in 2017, Ringrose continued:

"In those games they gave us a lot of access with spilt ball and turnovers which we knew wasn't going to be the case. Obviously they play the game with some fantastic skill and they didn't give us as much access into the game."

He also spoke on the impact of the defeat:

"We lose a game but it's not going to knock us off too much with what we believe in and what we believe we're capable of as a squad. Moments like these draw us closer together as a squad and motivate us more to - well, it's going to have to - to try and get a result in the next game."

On what went wrong, he said:

"Not too sure exactly but I think they put us under pressure in the right areas and our ill discipline let them gradually keep building into the game with the points they were putting up. It made it very difficult when they did take the lead; they defended incredibly well and made it very difficult for us to try and score in the end.

"We knew going into the game we didn't underestimate in any way how they were going to perform because we knew the quality was there and they didn't disappoint."

Sean Cronin spoke about what Ireland have to do to bounce back:

On whether there was a sense of panic in the second half:

"I wouldn't say we panicked – I thought we were close to cracking them three or four times, especially when we got close to the line."

On the difference in ranking between the teams:

"Japan are a quality outfit with some outstanding players, and I'm not going to take anything away from their performance today. It's obviously a big low for us – it's a World Cup and we're bitterly disappointed."

"Japan played an incredible brand of rugby, they were very expansive. They had unbelievably strong defence. They put us under pressure."

He also spoke on the momentum shift in the game:

"From the start, there was wave after wave of constant pressure from Japan. There's no level of easing yourself into a game – it was fast. It started fast and continued like that. It was a great brand of rugby played by them and they really put a test on us."

Speaking about the performances of the Irish scrum, he added:

"No one was really doing a job on the opposition scrum. It was a fair test and a good contest."