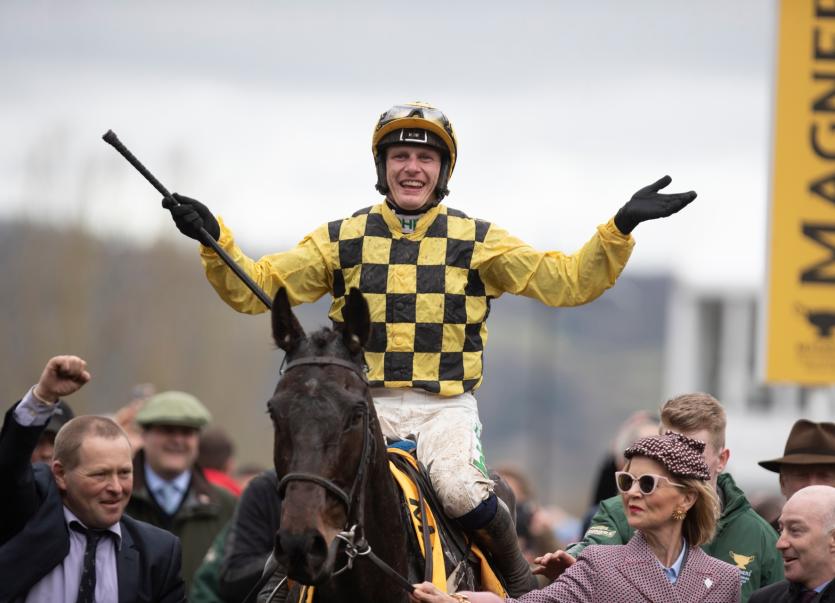 Irish trainers sealed another sensational Cheltenham festival with 14 winners across four days including victories in two of the biggest races of the year, the Magners Cheltenham Gold Cup and the Unibet Champion Hurdle.

Al Boum Photo won the Festival highlight, the Magners Cheltenham Gold Cup, sealing a first win in the race for Willie Mullins, who had seen horses trained by him finish second on six occasions in previous renewals.

It was a breakthrough Cheltenham Festival for many, but none more so than Meath trainer Gavin Cromwell who trained the JP McManus-owned five-year-old Espoir D’Allen to win the Unibet Champion Hurdle by a record 15 lengths on day one. Jockey Mark Walsh did the steering.

Racheal Blackmore, trailblazing the leading riders’ title race in Ireland for so long this season, went to Cheltenham seeking her first festival winner and came home with two: A Plus Tard for owners Cheveley Park Stud and trainer Henry De Bromhead on Tuesday, and Minella Indo for the same trainer this afternoon, in the maroon and yellow silks of owner Barry Maloney. Today’s victory in the Albert Bartlett Novices’ Hurdle was a first Grade 1 win for Blackmore.

Mark Walsh was again among the winners on Wednesday when he rode City Island to win the Ballymore Novices Hurdle for Bernadine Mulryan, wife of race sponsor Sean Mulryan. It marked a maiden Cheltenham festival winner for trainer Martin Brassil.

Willie Mullins made an explosive start on day one and took the opening two races of the festival with Klassical Dream, under Ruby Walsh, landing an emotional victory in the Sky Bet Supreme Novices’ Hurdle for owner Joanne Coleman in the colours of her late husband John, and Duc De Genievres sauntering to success in the Racing Post Arkle Chase for jockey Paul Townend and owner Jared Sullivan.

Aintree Grand National hero Tiger Roll and his trusted partner Keith Donoghue were the stars of day two with a scintillating 22-length victory stroll in the Glenfarclas Cross Country Chase. It was a back-to-back victory in the race for Gordon Elliott’s stable star and marked his trainer’s opening success of the festival.

Elliott would make it winner number two on Wednesday evening when star bumper horse and sales topper Envoi Allen readily held off the late challenge of the Willie Mullins-trained Blue Sari to impressively take the Weatherbys Champion Bumper. It was a second success in the week for owners Cheveley Park and winning rider Jamie Codd.

It was a hugely successful Festival for JP McManus who closed off the final day with his fifth victory of the week when Early Doors won the Martin Pipe Conditional Jockeys Handicap Hurdle for trainer Joseph O’Brien.

The 14 Irish-trained winners were spread across seven different trainers, and four victories and multiple placed horses was enough for Mullins to also take the leading trainer’s award for the sixth time.

Brian Kavanagh, CEO of Horse Racing Ireland, said: “It was an incredibly dramatic week at Cheltenham and Irish trainers, owners and jockeys played a starring role, I would like to congratulate all of those who enjoyed success including Willie Mullins, Paul Townend and Joe and Marie Donnelly for their victory with Al Boum Photo in the Cheltenham Gold Cup; Espoir D’Allen’s connections Gavin Cromwell, Mark Walsh and JP McManus, and Willie too for winning another leading trainer award.

“With 14 winners across seven trainers and nine owners, the reputation of Irish Jumps racing and Irish-bred and produced horses have been enhanced once again. Evidence of that was not just seen on the track this week – it was also confirmed by the continuing strong demand for Irish-produced point-to-pointers, with a record price for a point-to-point mare, achieved at Tattersalls at Cheltenham on Thursday night.”